NewsPaperthe art of publishing
HomeNewsLaurence Hodge: World leaders take to the streets. To protest against themselves?
7

Laurence Hodge: World leaders take to the streets. To protest against themselves? 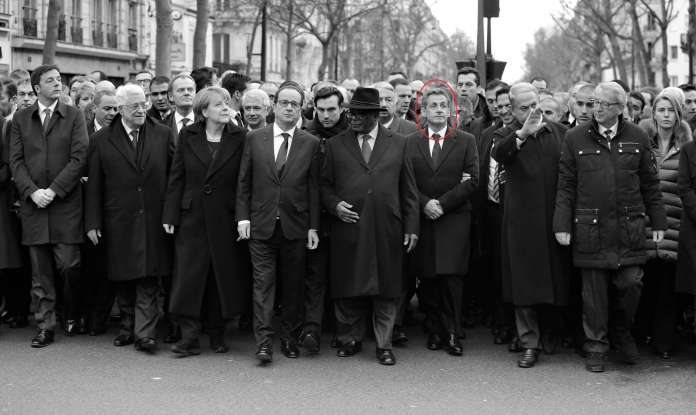 That’s the title of a piece in today’s edition of Charlie Hebdo and you can see their point – everybody is suddenly Charlie with the possible exception in this country of those of us who managed to live dry-eyed through the death and funeral of The People’s Princess.  The same goes for kindred spirits elsewhere, too.

What’s left of the Charlie Hebdo team isn’t apparently too impressed by events since the assassination of their colleagues.  With a distant echo of John Lennon they point out that more people were demonstrating for Charlie last Sunday than attended Mass and while getting the support of Madonna was a ‘good thing’ (well, there’s no accounting for taste), getting to shake the hand of the French prime minister, Manuel Valls, goes down firmly on the other side of the ledger.

The motivation of four million people who took to the streets on Sunday, fascinating though it may be, is a matter for behavioural psychologists.  The motivation of our elites is easier to discern.  For example for Nicolas Sarkozy, president Hollande’s possible successor and former tenant of the Elysée Palace, coming from behind to muscle his way into the front row (and look at the grin on the face of his minder – see circle)  the message is unambiguous “Je suis Sarko”.

But how about the rest of them?

Well the first thing to note is that a demo is about people making a demand of one kind or another.  It’s to alert the public, the powers that be, the government, what have you, that a significant number of people have a strong view about a given issue, like the anti-Iraq war demo in London where 500,000 people might just have well spat into a force 8 gale.

The notion that heads of government should demonstrate is laughable – a bit like shouting down a well to hear the echo – and it was another unpopular French socialist president called François who hit upon this wheeze in 1990 in the wake of Jewish cemeteries being desecrated.

As an official in France’s Vichy government, one might say that François Mitterand’s solidarity with Jews came late in life, but as a means of boosting one’s flagging popularity his technique cannot be faulted.  He was the inventor of the demo not against something but as a no-cost balm or salve for a troubled population.

There is – or there ought to be – agreement in Western societies and among their leaders that anti-semitism as well as vandalism in graveyards is reprehensible.  But does the same consensus surround Charlie Hebdo?  Its brand of satire and humour  – trenchant, uncompromising, puerile – has less than universal appeal and its political outlook is distinctly niche.

So what on earth is David Cameron doing marching in Paris?  Is he defending a magazine of the radical left?  Is the man who gave us Leveson marching for the freedom of the press?  Has Angela Merkel returned to her East German roots behind the Wall and will she now encourage the Pegida campaign within her own country?  Who invited Bibi Netanyahu (answer: Bibi Netanyahu), a man who actively encourages French Jews to emigrate to Israel – which is hardly a friendly gesture aimed at conciliation.

Mali’s President Ibrahim Boubacar Keita also rocked up and marched directly alongside Hollande, which will have played well back in Bamako and in the north of a country where AQ affiliates were driven out by French forces only after wrecking havoc and destroying much of the centuries-old Islamic culture in Timbuctu.

Freedom of speech has vanished here and elsewhere sometimes with the connivance of andsometimes at the behest of the band of hypocrites who were in Sunday’s front row.  A cartoon in the latest Charlie Hebdo shows a Charlie Hebdo cartoonist and a terrorist with a machine gun killing several people.  The caption reads: “Cartoonist at Charlie Hebdo, 25 years work; Terrorist, 25 seconds work – terrorist: a job for wasters and w***ers”.

Now there’s a job description with a potentially broader application!

Share
Facebook
Twitter
WhatsApp
Email
Previous articleChris McGovern: The looming education time bomb. Too many kids for the classrooms
Next articleReader’s Comment of the Day: The Tories have failed to rein in all the ‘free stuff’