Leaky Leo – about as genuine as the border crisis 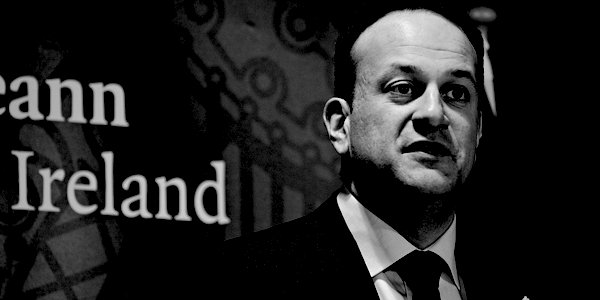 DEAR Leo, please don’t tongue-WAG. Especially when you’ve had your borders tucked and a ridiculous backstop implant – cos we all know who paid for it.

You know who I’m talking about, don’t you?

Princess Va-Di-Da! Somebody who’s got too big for their boots. Someone who forgets they’re only where they are because of who they’re hitched to.

Well, you know what happened, don’t you?

We all knew that someone was leaking stories, because this is supposed to be a friendship group. That’s why it’s limited to 28 members. It’s supposed to be a Community. Which is another way of saying, we’ve got each other. You’ve got my directive and I’ve got yours. You know what they say. If it wasn’t for the backroom corruption, we’d all be at war with each other!

Only problem is, somebody was leaking the secrets of our negotiation meetings.

So, we set out to see who it was. We circulated a fake story that our borders were being flooded.

Next day there was a story in the Vague News media about the very same thing. As the narrator would say in a Nick Hornby movie, that was when I knew I had to do something. But what?

The plot thickened! Next we planted a ridiculous story about going to Brazil to choose the agenda of our next trade policy baby. And what do you know? It was the lead story on BBC News that night – practically word for word. We’d have had a case for plagiarism if Laura Kuenssberg hadn’t inserted the words ‘despite Brexit’.

Finally, to confirm our suspicions, we posted something about Boris returning to TV. Next day Zoe Hockeysticks of the Guardian wrote a piece complaining about the lack of balance on Have I Got News For You. It complained about everything we’d put in our Instagram post – Tropes, Normalisation and Dog Whistle deviousness.

There was only one person who wouldn’t have been left out by the cultural references – Leo Varadkar. Or Leo la-di-dah, as the other small country WAGs call him.

Honestly, he pretends to be our friend, but he’s a devious one, isn’t he? He’s a desperate poser. Everyone knows he’s only being used by Jean-Claude Juncker. It was obvious when they got hitched that Jean-Claude didn’t have any long-term plans for this hamster. Can’t he see he’ll be kicked out of bed the minute he’s been used like a husk of Rory Best’s half-time orange?

Varadkar. What a fake. He’s about as genuine as the border crisis. We all know he had a lot – and I mean a lot – of work done on that backstop. And it cost a fortune. It was all paid for – but not by him. I think he’ll learn that soon enough when J-C trades up.

POSTSCRIPT: ‘Varadygate’ is a reference to a very public contretemps between two famous footballers’ wives, M’Lud. It’s been in all the popular prints, and the unpopular ones.

Share
Facebook
Twitter
WhatsApp
Email
Previous articleMelanie’s wise words on Trump and the Kurds
Next articleEditor’s pick of the week: We’ve all had it up to here with the eco warriors