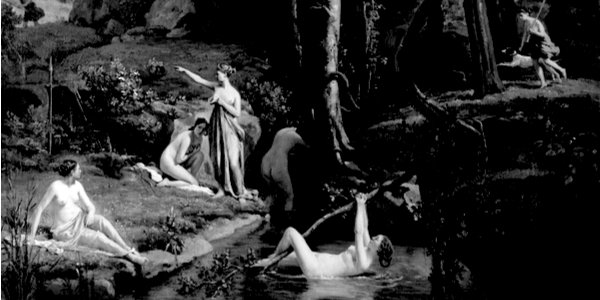 Here’s a battle where sense has prevailed against Leftism. The Manchester Art Gallery had removed from public view John William Waterhouse’s painting Hylas and the Nymphs, a work from 1896. It felt that mythological nude nymphs showing bare breasts were now just too much for modern Britain and a potential threat to women.

It seems that although we might be adults, we still need protection from having to make our own difficult decisions about what we can safely view, and political guidance to ensure we all have the right attitudes to art. Fortunately, faced by widespread derision and anger, the gallery has backed down and restored the painting to its proper place. It claims it had not been decided in advance that the removal would be permanent and was simply intended to start a debate. Looking at its original statements, though, it’s certainly not clear that it had intended to restore the picture so quickly.

The decision to remove the work (and postcards of it from its shop) had, according to the gallery’s curator of contemporary art, Clare Gannaway, linked into the debates around the ‘Me Too’ and ‘Time’s Up’ campaigns against sexual violence and exploitation of women. Presumably it was unaware that the myth depicted in this painting shows women as seductive predators, not as victims!

Whatever the story of this particular work, can we really believe that a late 19th century painting of nymphs has any relevance to the abuse that some women face today? ‘Virtue-signalling’ has become a rather tired and possibly over-used term, but this seems like the perfect example.

With 52 years’ experience of being male and of seeing how all sorts of men, whether enlightened or Neanderthal, talk and think about women, I find the idea that any man would have his views shaped by a 19th century painting deeply implausible. It’s no more likely to make men associate women with nymphs than the Disney classic The Little Mermaid would make them associate women with fishtails. As for the nudity, some defenders of the picture’s withdrawal used the word pornographic. Really? A nymph’s breasts in an oil painting are porn? This is either puritanism on steroids or the most morbid fear of the female body imaginable.

Yes, some men have terrible attitudes towards women, shocking crimes are committed, but that has nothing to do with the Pre-Raphaelites or glimpses of nudity emerging from water-lilies. Generations of intelligent and articulate women have no doubt trooped through the galleries displaying this picture and others in the same vein without taking offence or feeling threatened or disempowered. I’ve been around enough galleries and Pre-Raphaelite collections, accompanied by women, to speak from experience. (Despite having absolutely no technical knowledge of art, or any ability to remember the details, I’m a Pre-Raphaelite fan.)

It seems, though, that to some social theorists and the more radical feminists we need to be instructed about the carefully disguised attacks on women that the patriarchy has embedded in our art and culture. For the Guardian, we can’t always discern for ourselves the deep-set political messages that an art gallery might contain. Or make our own judgements about the real meaning of a piece of art. Instead, we must rely on cultural commissars to guide us.

There is so much in our cultural history that doesn’t conform to our modern sensibilities, that some on the Left want to scrub away. Although it’s been pointed out countless times that we can’t reasonably judge people from earlier times by our own standards, that hasn’t stopped them from doing just that: wanting to purify our cultural history until everything unacceptable or offensive has been purged. I’m sure some would be tempted by the simpler option of abolishing our past and starting again.

The sense of superiority that ideologues can have from knowing they have a special understanding of the world, to see meanings that others might miss, is deeply appealing. You can see yourself as special, a leader, one of the elite. This is the attraction that cults and sects of all varieties, whether religious or political, have offered their adherents throughout history. So although common sense might have won this round, the ideologues will certainly be back.

However perhaps, at least for now, we can get back to looking at some of the real oppression that women can face, from British schoolgirls of African or middle-Eastern heritage being taken away in their holidays to endure genital mutilation, to forced marriage or domestic violence in all its forms. Sexism of many types still exists; there’s enough to be concerned about without worrying about naked nymphs.