NewsPaperthe art of publishing
HomeNewsLeslie Loftis: America talks while the world burns. But Hillary’s victory is...
10

Leslie Loftis: America talks while the world burns. But Hillary’s victory is not assured 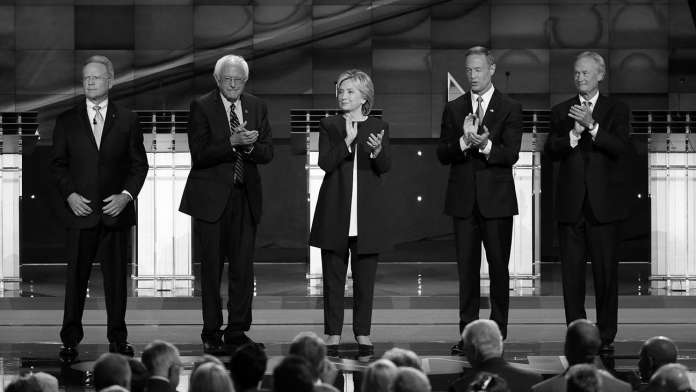 Once upon a short time ago, from about Nixon and Kennedy to the Reagan era, televised debates, the brain child of the non-partisan League of Women Voters, informed the public about the issues and the leaders. The debates became so essential that campaigns took them over, so much so that in 1988, the LWV stopped sponsoring the debates, stating that they “would not help perpetuate a fraud”. In the decades that followed, the debates became more political theatre, sometimes rigid and formal and sometimes frenetic, like Tuesday night.

The whole exercise might make some sense if tradition required our president attend something like prime minister’s questions. But besides press conferences, which can be avoided or orchestrated, there is no time other than a campaign when an America president must engage in open public debate.

Worse, the presidential debates have become ratings gold for suffering television news. The issues and the leaders are merely means for ratings spikes. Which brings us to the latest show, with the National Football League style opener, the questions submitted on Facebook, and the pre-game and post-game shows with graphics and quotes to become the next day’s social media memes. This debate, like the Republican one before it, are about ratings for CNN, Fox, and all the other alphabet news networks.

The ratings lie with Hillary Clinton — the hopeful first woman president — and so early conventional wisdom says it was Hillary Clinton vs Bernie Sanders with three also rans on stage and that Clinton “won” in a hard-hitting issues debate orchestrated by moderator Anderson Cooper. By the social media and alphabet media reaction, that’s probably the way to bet, but there is more public —a quieter public — out there than social media leads us to believe.

Sanders did better than the conventional wisdom thinks.

Jim Webb, one of the also rans, is an old school Democrat of the JFK brand of the party. But as many noted, that party no longer exists. Sanders, on the other hand, is an open socialist. There has been a socialist force in the Democratic Party for a long time, but they usually shied away from the term. In fact, this is why the American notion of “liberal” is different than everyone elses. Democratic socialists stole the term from the right to cover their statist ways with a term of freedom because “socialism” is, or was, American political poison.

After Tuesday night, I wonder if the conventional wisdom underestimates just how acceptable socialism has become in America. We will likely find out because I don’t think Hillary Clinton’s declared victory will age well while Sanders has something that the base wants.

Clinton avoided substantive answers. She mentioned her lady “credential” at least four times in the actual debate, and between the third and fourth segments quipped that it took her longer to go to the toilet.

She also got undeserved post-game praise for being in command of the debate by refusing to answer questions. Anderson Cooper went tough on the candidates often enough so that he could allow Hillary Clinton easy outs when it counted. Do you want to answer this question, he asked, about how she, as Secretary of State, flouted secure communication laws so she could avoid any oversight for her leadership decisions. “No,” she simply replied. Of course she doesn’t want to answer that question! The communications she’s hiding led up to the death of an American ambassador.

Sanders also came to her rescue, saving her the need to answer the tough questions and display a hint of leadership or even responsibility. That was the biggest hit of the night, when Sanders said he was sick of hearing about her emails. But this wasn’t the boon for Hillary Clinton that it seemed.

In part, the cheers reflect that people are sick of Clinton scandals in general. Sanders doesn’t have that baggage. But mostly, the scandal touches on real problems. Her stubborn “No” will not stand forever. Every day, world tensions stretch tighter. Isis. Russians in Syria. Refugees in Europe. So far, America is answering these crises by hoping that they go away on their own, and if Sanders or Clinton wins the White House for the Democrats again, ‘wait and watch’ will likely remain the American policy. The violence will come to others first, after all. We have two oceans and a large navy that can see to that. But to avoid the reality without feeling guilty for letting the world burn, we need to be doing something more important than bickering over another Clinton lapse of judgment. Sanders provides the Something More Important.

Their base doesn’t want to confront the hard world problems. Fret about them, sure. But act? No. Global warming is an easy out—a phantom problem built on carefully selected statistics, making success impossible to measure. It is the perfect busy work, a shiny new fiddle to play while the world burns.