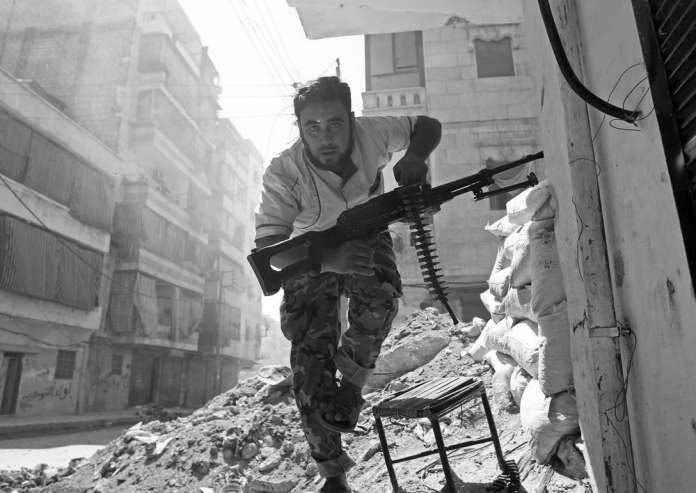 The Daily Mail headline caught my attention: “Apocalypse ignored: As Gaza grabs the headlines, epic slaughter engulfs the rest of the region. But where are the protests?“

Where are the protests is an excellent question. And the Mail does get to it, after screens of news and photos, mostly about Gaza. The first photo is captioned: “Palestinian fighters from Islamic Jihad hold their weapons at the funeral of a fellow militant in Gaza”. The second photo in the article is a map graphic with summaries of the unheralded horrors happening outside of Gaza.

Then there are five pictures of either Gaza damage or Palestinians children in hospital beds with captions such as: [emphasis mine] “Hanan Abu Leil, a six-year-old Palestinian girl injured by an Israeli airstrike, recovering in the Makassed hospital in East Jerusalem. Doctors and aid agencies are trying to capitalise on a truce in Gaza to evacuate more wounded Palestinians for life-saving medical treatment in east Jerusalem, Israel and Jordan.“” Whether the children are in Israeli hospitals because Gaza spent the past nine years worth of time, money, and sweat building the weapons and infrastructure to attack Israel instead of medical facilities to care for its own or they are there because that’s where the reporters are, the Mail didn’t say. Then the Mail has another three paragraphs about Gaza and Baroness Warsi’s resignation from Cameron’s Cabinet to protest at the Government’s weak stand against Israel.

And then, finally, the Mail introduces the “Apocalypse Ignored”.

Horrific though events in Gaza have been, they were actually a sideshow to the appalling slaughter now raging across much of the Middle East as well as Libya in North Africa.

What is so extraordinary is that the voices protesting so vehemently against Israel’s actions remain resolutely silent over this bloodshed in Northern Iraq and Syria, which is on a far greater scale than ever took place in Gaza.

Despite the indignation of so many at Israel’s ruthless display of power, the country has gone to great lengths to prevent civilian casualties by using leaflets, text messages and phone calls in Arabic to warn people to leave targeted buildings.

It should be obvious, but apparently is not, that protests require an informed public. The public might be misinformed or whipped into a mob by yellow journalism, but they have to learn of something which meets with disapproval. Protest is a reaction. So where are the protests to the horrors erupting outside of Gaza? Why are these apocalypses ignored? Perhaps because few know about them and news organizations giving the Gaza conflict priority placement might have something to do with that. Until last week, who, really, reported on them?