NewsPaperthe art of publishing
HomeNewsLeslie Loftis: Trump stumbled in Iowa. Look for a Cruz vs Rubio...
5

Leslie Loftis: Trump stumbled in Iowa. Look for a Cruz vs Rubio run-off 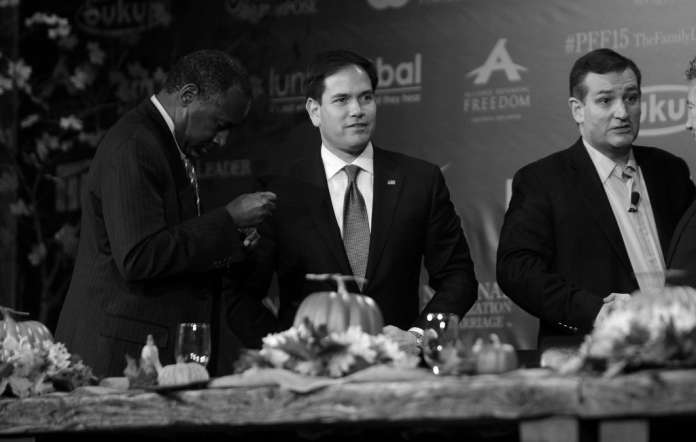 Americans have long election cycles. One month into the presidential election year and we’ve endured about a dozen candidate debates as well as the endless poll watching and wonky think pieces that come with big elections. Yet, we just had our first actual vote on Monday — and we still have ten months to go until election day.

Our cycles last so long partially because we require 50 state party candidate votes leading to the parties’ nominating conventions. We could do the state primaries and caucuses (individual states have different nomination processes) in a couple of clusters over the course of two months which would leave plenty of time to set for the national party conventions. We do not do something so sensible because the long voting schedule, and the front loading of special interest states such as Iowa, favours the candidate with the money backing. Usually this works to the advantage of the party elite — and, of course, the four states allowed to have primaries before March: Iowa, New Hampshire, South Carolina, and Nevada.

Little about this election cycle, however, can claim the adverb “usually”. The establishment candidate, Jeb Bush, blew an incredible amount of money for about 2 per cent of the Iowa vote. It is now crystal clear that the Republican voters are not interested in having the GOP elite dictate the nominee again.

The first voters in Iowa cast a huge majority for anti-establishment candidates, the non-politicians Donald Trump and Ben Carson, and two Tea Party elected senators. Ted Cruz, the senator who is the most notorious GOP rebel in Washington DC, won. Furthermore, despite all the poll hype, the voters did not fall for Donald Trump, the scream-of-frustration candidate. Trump not only failed to win, but almost came in third to Marco Rubio. The base isn’t as unmoored, stupid, and trollish as the elite has assumed. They went for Cruz, the constitutional conservative with the most consistent principles. Cruz even took a stand against ethanol subsidies in the state most dependent upon them a few days before the voting started. That earned him an anti-endorsement from the Governor. He still won.

Trump was mostly hype that the media nurtured. It was good for ratings

The poll assumptions favored Trump, but the huge lead polls required a huge turnout. (The Cruz camp gamed the numbers to 170,000. Their model held. I think the actuals just topped that.) With those oft reported leads, social media buzz amplified younger, heavy internet users. Together they made local campaigning seem less important.  Trump with his command of national media attention did not think he needed ground organisation, while Cruz ran a classic ground operation, augmented by social media. We might look back to find that his team wrote the textbook on how to run a national campaign in the modern era.

Even so, the Iowa caucus and New Hampshire that follows next Tuesday are not about winning. They are about momentum and fundraising. Each cycle is different, but often a third place finish that beats expectations is better than a first place finish that falls short. Certainly, the media are trying to sell Rubio’s third place finish as the story of the night. They don’t want Trump, their golden ratings calf, to get gored yet. And they don’t like Cruz any more than the GOP elite does. Granted, Rubio’s showing was impressive. He will get momentum from Iowa. The story of the night, however, was that Trump did not win, and that Cruz and evangelicals stopped him.

As expected by those not caught up, either way, in the Trump candidacy, the race is turning into Cruz vs Rubio. The rest of the field would have  to outperform shockingly their expectations for them to remain viable. Someone like Christie can hang in until New Hampshire, where he would have to over perform to justify staying in. Trump is expected to win big. He has trapped himself with high expectations. Anything less than a decisive win for him is a loss, and he just lost his aura as a winner.

Even more than Hillary coming out of Iowa claiming the thinnest of wins (that was quite stunning), Trump’s appeal depends in large part on an air of inevitability. Hillary has the Clinton machine to help her power through her loss. Trump lacks such organisation.

At this point, everyone else is mostly sucking money and votes from Cruz and Rubio. Should Trump and Carson exit quickly — admittedly not likely for Trump — Cruz probably gets the nomination. If the more establishment candidates bow out quickly and throw their support to Rubio, then he has the better shot at the nomination. Rubio is still very competitive, but Cruz has more and simpler paths to the nomination.

This is hardly a devastating choice for principled constitutional conservatives. Yes, Cruz is more consistent and more confident to lead on conservative issues, but I will hardly need to hold my nose to pull the lever for Rubio in the fall should he be the nominee.

Share
Facebook
Twitter
WhatsApp
Email
Previous articleJane Kelly: Batty Auntie endorses a new cover-up. But this time just for girls wearing the niqab
Next articleReader’s Comment of the Day: The EU is its own worst enemy