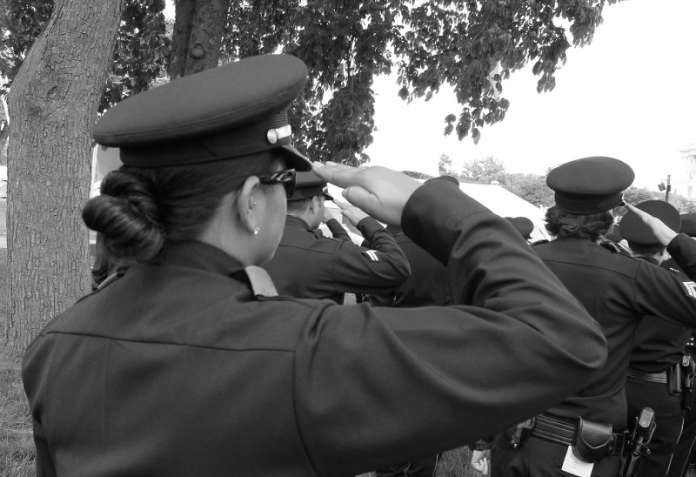 The heat, anticipation, and disillusion are getting to the American public. While we wait out July, frustration runs high. History should have steeled us for this. Heat and frustration often mix like gunpowder and sparks.

Many, many others have covered President Obama’s inappropriate politicalisation of the murders of Dallas law enforcement officers at a #BlackLivesMatter protest last week. He used the funeral to make divisive political points. I leave the complaints to those others. I would rather contrast the Dallas Police Chief Brown and former-President George W. Bush (who lives in Dallas), who made speeches to honour the dead, take action, and heal our wounds.

In the days after the murders, Chief David Brown, who has remade the record and reputation of the Dallas Police Department by building bridges into the high risk communities they police, began the positive response by calling on those protesting police at brutality to become part of the solution. “We’re hiring,” he said.

America is in a vicious cycle. Violence in fatherless communities is high. This is a politically incorrect observation, the first cause that is fatherlessness, and one of the reasons solutions remain elusive. Young men looking to belong in places without paternal authority form gangs and rule in “Lord of the Flies” style. Police going into these areas have gotten increasingly reactive — not unjustifiably — to aggression. That has fuelled—not unjustifiably—protests against law enforcement.

As a result, law enforcement has pulled back from the high risk areas, which have then descended into more violence. We call it the Ferguson Effect, after the Ferguson Riots in 2014. Black neighborhoods remain dangerous and black lives are lost by their own hands.

Chief Brown proposes that the protesters stop merely talking about the tragedy of the black community and start working to change it. His message wasn’t received with universal praise, but it is the right message.

President George W. Bush also had the right message, this one for America as a whole. As I know Brits do not care for his accent, I will quote the relevant bit:

“At times, it seems like the forces pulling us apart are stronger than the forces binding us together. Argument turns too easily into animosity. Disagreement escalates too quickly into dehumanisation. Too often we judge other groups by their worst examples, while judging ourselves by our best intentions. (Applause.) And this has strained our bonds of understanding and common purpose.

“But Americans, I think, have a great advantage. To renew our unity, we only need to remember our values. We have never been held together by blood or background. We are bound by things of the spirit – by shared commitments to common ideals.

“At our best, we practice empathy, imagining ourselves in the lives and circumstances of others. This is the bridge across our nation’s deepest divisions. And it is not merely a matter of tolerance, but of learning from the struggles and stories of our fellow citizens, and finding our better selves in the process.

“At our best, we honour the image of God we see in one another. We recognise that we are brothers and sisters, sharing the same brief moment on earth, and owing each other the loyalty of our shared humanity.

We are bound by shared commitments to common ideals — a rather succinct summary of the American experiment and American Exceptionalism. We fail because we have forgotten it. We’ve forgotten it because we failed to teach it.  That is yet another indictment that political correctness must answer. It is rude, incorrect, to think of ideals and exceptionalism. It offends relativist sensibilities to suggest that ideals exist, and so we denied them. And now we reap a unity of fear and grief. It is past time to remember who we are and begin to act like it.