NewsPaperthe art of publishing
HomeNewsLeslie Loftis’s America Watch: Only a Constitutional Amendments Convention can save us
12

Leslie Loftis’s America Watch: Only a Constitutional Amendments Convention can save us 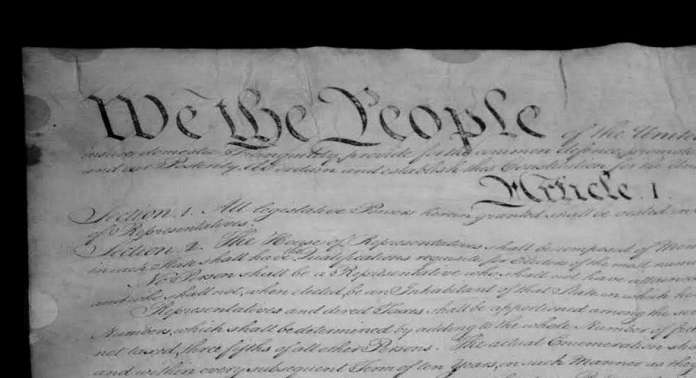 Americans know the story.  At the close of the Constitutional Convention of 1787 when the delegates came out of Independence Hall, a Mrs Powell asked Benjamin Franklin, “Well, what do we have?  A monarchy or a republic?” to which Franklin immediately replied, “A republic, if you can keep it.”

We have kept it — but for how much longer? The foundations of the framework the Constitution gave our governments have been steadily blurred, obscured, then forgotten since the New Deal. About 75 years of muddy judicial precedent and even most lawyers will stop looking at the root ideas in favour of finding some supporting quote in an opinion to convince the bench of whatever is at issue.

Now, the structural foundation of our republic is almost gone. The “checks and balances” of our three federal branches of government are out of whack. The Executive Branch overreaches. The Judicial Branch oversaw the expansion of powers for the Legislative Branch and then, finding Congress still too slow or too dumb, starting legislating itself.

So much power has flowed to the Justices of the Supreme Court, that the tiebreaker in Election 2016 (Clash of the Terribles) is US Supreme Court appointments. It is a logical position. With our modern modifications to the governments of the United States, USSC appointments are of dire consequence.

But petitioning the Court, or waiting for the President to issue or rescind an Executive Order, or lobbying Congress to act  are not the only options left to the American people. We forget that the states themselves can act and fix much of this mess and restore our federalist structure.*

In honor of Constitution Day 2016, one group hopes to remind us of options still available to us using Article V of the US Constitution, which provides: [emphasis mine] “The Congress, whenever two thirds of both houses shall deem it necessary, shall propose amendments to this Constitution, or, on the application of the legislatures of two thirds of the several states, shall call a convention for proposing amendments, which, in either case, shall be valid to all intents and purposes, as part of this Constitution, when ratified by the legislatures of three fourths of the several states, or by conventions in three fourths thereof, as the one or the other mode of ratification may be proposed by the Congress”

Since we’ve never had an Article V convention, mystery surrounds it. That mystery was encouraged by detractors decades ago. Federal power centres do not want the states remembering, much less exercising, their powers. In fact, the reason the Article V convention option has never been used is because the mere threat of a convention has spurred Congress to propose amendments. Still, the mystery has effectively staved off a convention in the modern era.

Therefore, advocates and legal scholars from across the country are participating in a mock Article V convention in Williamsburg, Virginia this week.

Delegates, a 50 state representative group chosen from the likes of state legislators and legal scholars, started arriving Tuesday. The ConventionofStates.com had a slate of proposed amendments that the public could vote on for consideration. (Amendments at a real convention would likely look more like, or be, the Bill of Federalism proposed by Prof. Randy Barnett in 2009.)  The Convention of States Project will live stream the mock convention on Friday, September 23rd.

Supporters hope that seeing a convention will quell some of the old worries. Seeing is believing, and the Convention of States Project is not afraid of sunlight.

No matter who takes office after this election, Americans have cause to worry. Neither major candidate cares for the government structure that protects our rights. They think and act in terms of ends justifying means and are likely to ignore law that does not suit their purposes. Congress has proven flaccid and the Court fickle.

No matter what November brings, an Article V Convention of States may will be the last protector of the American expectation: first come rights, then comes government.

*US federalism does not share many of European federalism’s problems. The European Union essentially made the same mistake our original Articles of Confederation did: not enough central power for a cohesive nation. The Constitution was drafted to fix that.