NewsPaperthe art of publishing
HomeNewsThe Army shows up the NHS
0

The Army shows up the NHS 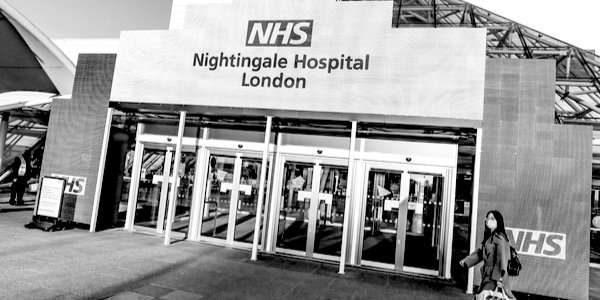 WHATEVER you might say about the government’s response to the corona crisis, the construction of the Nightingale Hospital is pretty impressive.

In nine days, soldiers from the Royal Anglian Regiment and Royal Gurkha Rifles worked with NHS staff and contractors to convert 87,328 square metres of halls at London’s ExCel Centre into 80 wards. Here is a timelapse film of the process.

At first it will house 500 beds, fully equipped with oxygen and ventilators. It could get as big as 3,500.

Notice something about those men and women?

Nary a mention of Sustainability.

How long will it be before their lack of global vision brings the whole thing crashing down? (You can bet that the Guardian’s Carole Cadwalladr is compiling a zinger of a question on this very subject right now.)

Where is the Director of Outcomes (DoC)?

A half-decent DoC can expect to be paid around a hundred grand on the NHS these days.

Don’t get a DoC confused with a Doc, or doctor. Ha! A doctor can be bought with the chump change left over after you’ve come home from an overseas conference in Dubai and smuggled a Corporate Transformation Evangelist (CoTE) through customs.

Mind you, a CoTE is cheap in comparison with a Digital Disruption Manager (DiDiMan), who will waste no time in reminding you who is boss. These days, no surgeon may reverse your stoma and no nurse may attach any life-supporting equipment unless they have phoned the IT department and cleared it with the DiDiMan from computers.

How are nurses going to know if a patient is on Nil By Mouth or whether they can be given solid food? I suppose the doctor could always write it in pen on a notice by the side of the bed. But that is too easy.

Communications have to be consistent with the rest of the NHS. There have to be channels. More than one. Yes, there must be Omnichannels, which means that nobody will be able to communicate without the appointment of an Officer of Omnichannel Outcomes. This being a new post, the pay will be on a scale to compete with the BBC.

We cannot risk the hospital grinding to a halt over the weekend, so a Global Gestalt Guru will be needed. The Nightingale is going to need a Corporate Transformation Sensei. It will be seriously exposed without a Strategic Zeitgeist Csar. That will cost around £150,000. It’s money well spent. But they’ll need a Corporate Transformation Director to go to the bar for them.

These people are vital to the running of the NHS. Otherwise why are they paid ten times the salary of one of the engineers who built the hospital in record time?

The NHS spends millions on highly paid executives who are never needed at the weekend. Or in any unsocial hours. But they must be vital. I mean, could we get by without them?