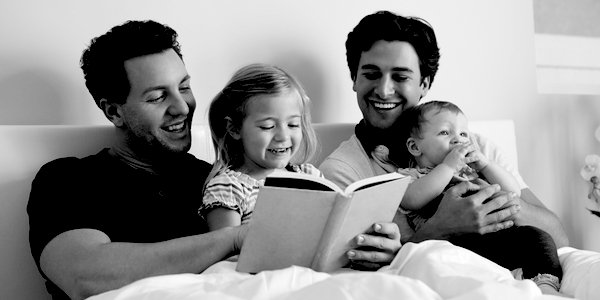 Richard Littlejohn has committed a terrible crime and all hell has let loose. ‘Please don’t pretend that two dads is the new normal, it isn’t,’ he boldly wrote on Friday.

Diver Tom Daley and his husband proudly posing all over the newspapers and on social media, with the ultrasound of ‘their’ yet-to-be-born baby, precipitated his plea for truth. He wrote:

I still cling to the belief that children benefit most from being brought up by a man and a woman.

Which is precisely what worries me most about the Daley publicity stunt. Here we have two men drawing attention to the fact that ‘they’ are having a baby.

But where’s the mum, the possessor of the womb which features in this photograph? She appears to have been written out of the script entirely.

Was the mother, whose identity we were not told, ‘merely the anonymous incubator’? asked Littlejohn, going where the mainstream media usually fear to tread.

It’s a question we’ve raised on The Conservative Woman here and here. But it is not one that gay-sensitive polite society is meant to ask.

Predictably Littlejohn caused outrage at Pink News. It was, they claimed, proof of his homophobia, not of their fiction and Tom Daley’s conceit.

Which raises the question: exactly what fact is it that the massed offended of the politically correct refuse to accept here?

That two men cannot biologically expect a child together? For they can’t. Full stop. They may be able to commission a woman to carry a child but it is she who is the mother when the child is born. They must apply to court for a parental order to create the legal fiction that a child can have two (biological) fathers.

Or is it the uncomfortable fact that, whether it is a gay or hetero-sexual couple doing the commissioning, ignoring the surrogate and genetic mothers in these arrangements to feed the fiction is both de-humanising and a form of misogyny?

Or maybe it is the reality of the exploitative global industry that surrogacy is, though it is illegal here and in the EU (for good reason), that they don’t get?

Or is it that their ‘parental rights’ justify the exploitation of the mainly poor women from poor countries at the heart of this trade – a trade in which these women are breeders and their children commodities, and which is but a step away from buying and selling children?

This is the spiral of silence and deceit that society is expected to go along with. It is hard not to feel angry. It’s hard not to be angry about the compulsory ‘what a great job gay dads do’ that is the essential precursor to any conversation about gay parenting. For whenever the subject comes up, we are expected to deny the truth as we know it, as Littlejohn knows it, which is simple. However warm, caring and loving same-sex parents may be, they cannot supply for the child the emotional or psychological benefits of the missing father (if lesbian parents) or mother (if gay male parents). And it is going to be hard for the child, but we are just not allowed to say so.

All hell breaks loose if you do because parenting has been hijacked by politics, popular social science has been exploited in the cause, and we have allowed it to happen, never minding the children, and barely made a protest.

Yet it doesn’t take much to find out that the methodology behind the ‘proof’ of this claim of gay equality does not exist. Typically, it is not children’s outcomes but their parents’ assessments or views that are measured. This glowing Mirror headline, for example, was based on questionnaires which parents chose whether or not to fill in, a so-called self-selecting sample which is known to be statistically highly problematic. Would parents elect to respond if they believe their set-up might be hurting their child? Even so, a third of respondents admitted that their children had been subjected to teasing or bullying because of their sexuality.

Honest academics agree that the lack of high-quality data leaves the most significant questions about gay parenting outcomes for children unaddressed and unanswered.

The studies that have objectively examined and measured real child outcomes unsurprisingly reach a different conclusion – that children of same-sex couples might not fare so well.

One by US Professor Mark Regnerus, based on a sample of 3,000 adults, found that children who had been raised, for at least a brief time, in families with a gay, lesbian, or bisexual parent were more likely to report dysfunctional adult outcomes than those who had been raised in other family structures, especially those with continuously married heterosexual parents.

A more recent study using a large US national survey, discussed here, was the first to follow a cohort of such children into adulthood. Its findings were stark. At age 28, adults raised by same-sex parents were more than twice as likely to have depression as those raised by a mother and father. They also had elevated risks for obesity, suicidality and anxiety.

Neither study claims causality, but such powerful differences cannot be disregarded. Why would we make children the subject of an adult social experiment? What could be more selfish?

This time last year Philippa Taylor asked: ‘Who is concerned about the effects on children of being cut off from their gestational mother and from their biological heritage and identity?’

Anyone? The answer, sadly, is very few.

Share
Facebook
Twitter
WhatsApp
Email
Previous articleAnn Farmer’s thought for today: Born-again Communism is more dangerous than ever
Next articleGavin Williamson’s challenge: to develop a vision for keeping the peace