NewsPaperthe art of publishing
HomeNewsLiam Fox: A European army is a vanity project that would sap...
16

Liam Fox: A European army is a vanity project that would sap our strength 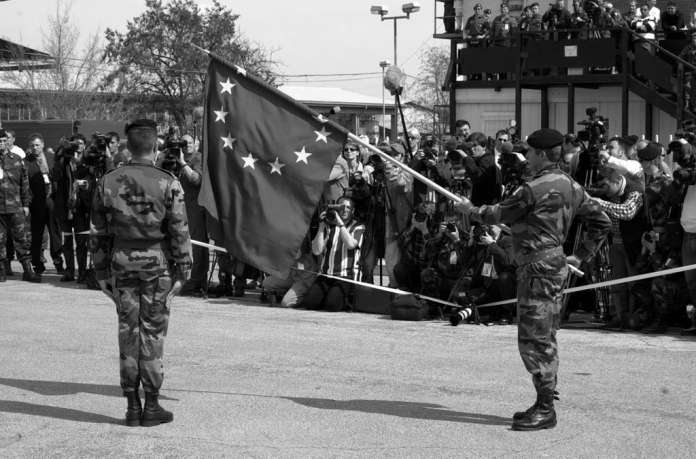 With the local elections out of the way, all eyes will be on the forthcoming referendum. We need to take a hard-headed and practical look at the issues relating to our relationship with the European Union unmarred by sentiment or romanticism.

In an era of globalisation, with enormous new opportunities, we are locked into a backward and inward looking political model designed in the 1950s and executed by bureaucrats and a political class seemingly indifferent to either the wishes or needs of their citizens. We have witnessed a generation of young Europeans having their hopes for the future sacrificed on the altar of the single currency with all the social tensions that this will produce. Despite our wise decision not to join the euro, our economic and trading interests are compromised by our proximity to this inherently flawed and ultimately doomed project.

The relentless pursuit of a pan-EU diplomatic service, exacerbated by the willingness of successive British governments to shrink the size of the FCO has reduced our overseas footprint, undiluted our influence at a time of unprecedented global opportunity.

It is completely clear, to any remotely objective observer, that any talk of “a reformed EU” is a lie. Not only is the direction of travel firmly towards the goal of ever closer union but the EU is increasingly taking on the trappings of statehood.

The leaks from the German defence White Paper this week make clear that the ground is being prepared for an enhanced German defence role and steps are being taken that will ultimately lead to a European army. While current levels of expenditure may make this little more than posturing in the short term, there is a serious long-term risk to our security. There are those at the heart of the “European project” who have always seen NATO as a stumbling block to their ambitions for ever closer union, denying as it does, access to this particular policy space. EU defence pretensions, unmatched by increased expenditure, have already resulted in duplication and diversion of funds that should have been earmarked for the Alliance. The United States, which this year will carry more than 70 per cent of the Nato financial burden, is already having its patience tested by the unwillingness of European nations to carry their own weight on defence. We do not need another European vanity project, this time in defence and security, to further weaken the transatlantic alliance that has underpinned our security throughout the post-war era.

Britain’s interests and influence are not being enhanced by our membership of the EU, they are being diminished. The European Union is failing, and will fail, to meet its key objectives and prosperity and security. The Eurozone will remain mired in the structural failure of the single currency and the disaster that is Schengen will continue to produce chaos and instability.

Yet the decision we have to take on the 23rd June is much more profound than simply our membership of the European Union itself. The crucial question is this – do we believe that a supranational body is an appropriate vehicle for prosperity, stability and security in the 21st century? I do not.

I believe in international institutions not a supranational one. I want cooperation with our partners and allies where it is in our mutual interest to do so. However, I believe in keeping separate the instruments by which we can pursue Britain’s independent national interests in a world where to do so will require flexibility and agility. The EU is a drag on our national aspirations.

I want to leave the European Union primarily because I want to get control of our law-making. I believe that an unelected court that is able to override our democratically elected parliament is an affront in the 21st-century.

We will not be leaving the EU but joining the rest of the world.