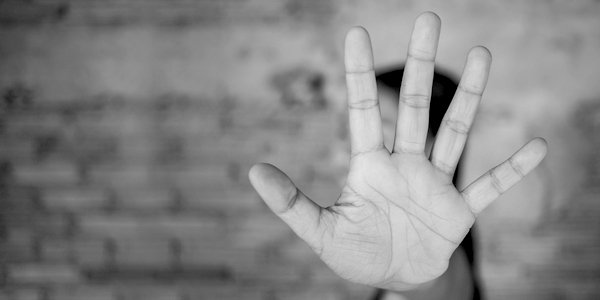 There must be some outside government and the police who are glad that hate crime is recognised as an aggravated crime. But can there be anybody who honestly believes that the definition of hate crime in the UK, which relies on the subjective perception of the ‘victim’ or of a third party rather than an objective reality or clear intention on the part of the ‘offender’, is anything other than bonkers? An offence can even become aggravated on the say-so of a bystander, and since there is now every prospect of misogyny becoming a hate crime, and ageism too, a lot of people are going to need banging up.

The latest figures on hate crime in England and Wales were released on October 16, and the accompanying press pack generated a crop of predictable headlines from publications that go for lightly subbed hand-outs and endless opinion pieces instead of conducting their own independent analysis:

The headlines reflect increased raw totals but fail to consider anything beyond the bland official gloss. 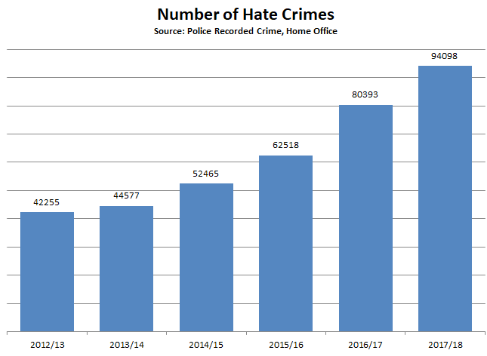 Recorded offences have indeed doubled over the period. However, there is nothing in the data to support the Guardian’s tendentious link with terrorism and the Brexit vote any more than some invented and equally spurious correlation with, say, the introduction of plain packaging for cigarettes or the downturn in Arsène Wenger’s managerial fortunes. Indeed, the opposite may well be true.

Could it be that the increase in hate crime owes much to the growth of its equally ugly and socially divisive twin, Identity Politics? If politicians and special interest groups are constantly braying that such and such a group requires special privileges then there will surely be a reaction from individuals who identify with those groups and who are encouraged to claim that they are in some way oppressed. Add to the mix a police force that curries favour with minority groups and reassigns resources from ‘traditional’ criminal investigations into burglary and shoplifting to monitoring Twitter and Facebook for hurtful remarks, and the growth in hate crime becomes less surprising.

One might contend that Brexit actually slowed the increase in hate crime, which grew at 29 per cent between 2015/16 and 2016/17 and only 17 per cent for the period following the referendum. Equally, the suggested link with terrorism by both the Guardian and the Times doesn’t hold water. Acts of terrorism have sadly become all too commonplace, and the chart above and the monthly stats below show no dramatic hikes to coincide with terror atrocities. The growth of the blue bars in the chart resembles nothing so much as the sales performance of a successful consumer product supported by an effective advertising campaign, and for some readers that may seem an accurate analogy of what is happening with hate crime.

There is in fact a meaningful pattern to be found: the data provides a monthly breakdown of Race and Religion Hate Crimes for the four full years 2014 to 2017 and one can see not just the increasing trend year on year but the clear annual peak in the summer months. 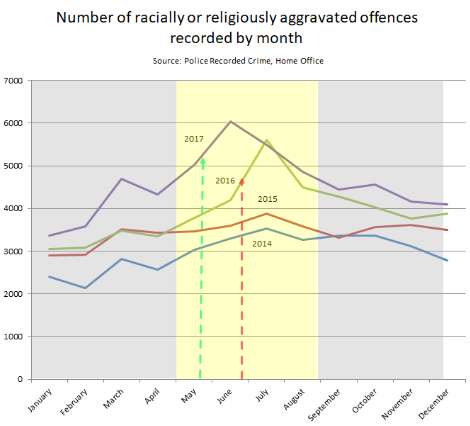 England’s roads in summer have a number of cars sporting Ecosse and Cymru stickers on the back as people seek respite from their remote and rocky fastnesses. Do these visitors suffer racial abuse from English motorists? Or is it much more likely that all people are simply out and about much more when the weather is relatively fine and so there is naturally a greater degree of interaction with other people? And could it be that encounters with more people are the touchstone for hate crime because if people have been increasingly sensitised to their protected victimhood characteristics why wouldn’t disagreeable encounters become ‘hateful’ and not simply unpleasant? It boils down to this – the more people you encounter, the greater the number of people who will feel that you are oppressing them, though you may not be aware that you are doing this.

Hate Crime has a number of ‘strands’, so the racially or religiously aggravated offences shown in the monthly stats above give an incomplete picture. The inconsistency of all the figures is one of the serious shortcomings of the dataset, of which more later. 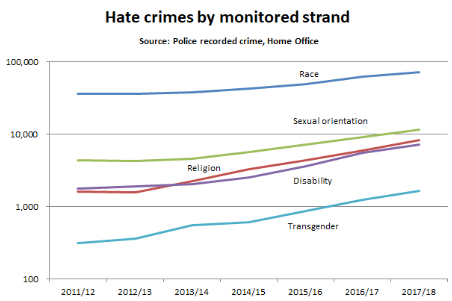 Race hate is by a long chalk the largest category of hate crime, accounting on its own for 70 per cent of the total in 2017/18. This is why the graphic here uses a logarithmic vertical scale so that the other categories are not squeezed together at the bottom of the graph. Note that a side-effect of this approach is to make the slope appear more gradual than in the one at the top of this piece.

Race is more readily perceived than other characteristics by both the victim and the offender. Consequently there can be no surprise that Race Crime leads the hate field. There is no data to indicate how these crimes break down as to black-on-white hate, white-on-black hate or any other combination of colour and race hate. What is known is that the police in Rotherham, Rochdale, Oxford and now Huddersfield are willing to wink at major crime in the interests of community relations; this might or might not be a factor influencing the compiling of hate statistics.

If the theory holds that the more recognisable the victim characteristic by sight, the more people with that characteristic will present as victims, there will be an explosion in hate crime if misogyny becomes a new strand. Similarly ageism risks giving the total a further significant boost and so-called intersectionality (where victims possess more than one strand of protected victimhood characteristic) will blossom: the day of the blind Asian Buddhist lesbian pensioner with XY chromosomes is about to dawn.

Among the other existing strands, an individual’s sexual orientation and religion are not as a rule obvious to strangers. Disability and transgender together scoring less than 10 per cent are relegated to niche hate for the present.

And it seems likely that if the strand characteristics of the victim are known only to the victim then it is the victim’s perception that will inevitably be the trigger rather than the offender’s intention.

When it comes to religious hate crimes, the newly released data include an incomplete breakdown by religion for an undefined period. The Metropolitan and Lancashire forces did not submit data under this heading so there may be around 2,500 further religious hate crimes from London and the North West for the total to approximate to the total for 2017/18. 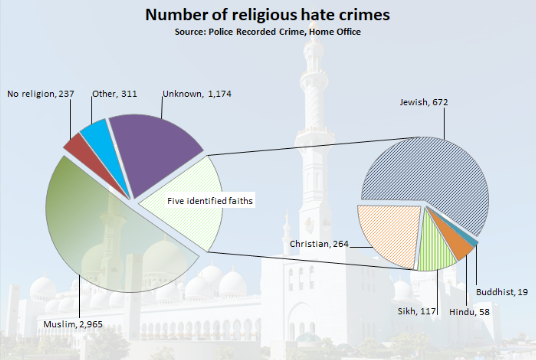 The numbers are interesting for a couple of reasons. First, 30 per cent of religious hate crimes involve victims of ‘no religion’, ‘unknown religion’ or ‘other religion’. Whoever compiles such junk needs to be fired and the police officers who blithely fill out forms with rubbish (perhaps because Church of England or Christian is taken to mean ‘no religion’) should be disciplined.

Second, it is unsurprising that Muslim hate crime accounts for half of the total since non-Muslims probably distrust Muslims more than any other category of religion, race or what have you, and Muslims are aware of this.

It is interesting that Jews and Christians make up 16 per cent of the victims; it is open to conjecture who the offenders might be in such cases.

Much of the data is submitted by 33 police forces out of a possible 44 in England and Wales. Ministers should be asking themselves and their officials whether it is a sensible use of resources and taxpayers’ money to provide incomplete statistics. If the exercise is worth doing it needs to be comprehensive.

Furthermore, many of the tables in the release are from the Crime Survey for England and Wales and have no place alongside actual even if incomplete data. The juxtaposition may have value to the CSEW in gauging how accurate their sampling is but that is not the scope of this set of data and serves no purpose in what is already something of a dog’s dinner.

Readers who have followed the analysis thus far may think that hate crime is a lot of phonus bolonus and in any case socially divisive. They will appreciate the irony in the story of the hate crime police constable, widely reported in the media recently, who put his daily preoccupations to one side in order to conduct traditional policing with little thought for hate crime strands.