Life as the PM’s wife is no bowl of Cheries 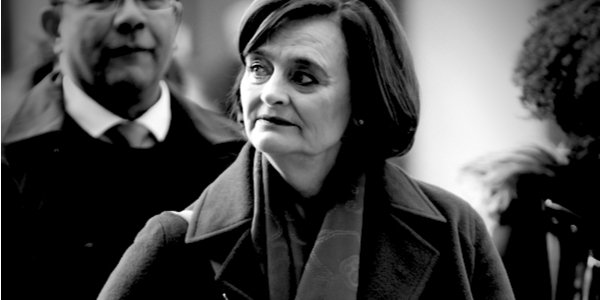 LLOYD Evans’s new one-woman play Cherie – My Struggle is previewing at the White Bear Theatre in Kennington prior to its Edinburgh debut. Mary Ryder is Cherie Blair and for 90 minutes holds the stage as she describes Cherie’s childhood in Liverpool and her marriage to Tony which thrusts her into the limelight.

Her life as consort to the PM is ghastly. She is not allowed to drive, three security men are with her when she goes shopping (‘two in the shop, one in the car outside’) and of course she is stalked and criticised by the press. My thoughts turned from Cherie (not a woman for whom I feel much sympathy) towards Marina Wheeler, who is divorcing Boris Johnson. Her timing is perfect. How clever of Marina to escape the hideous existence of being a Prime Minister’s wife. Like Cherie, Marina is a QC and used to speaking her mind. Mary Ryder (as Cherie) tells us that she was told not to speak in public about anything except flapjacks and children.

So how will life pan out for the ‘First Girlfriend’? Whatever she wears, Carrie Symonds can expect to be attacked for her dress sense – if, after all the romance hype, she gets beyond the staff line-up to stand at his side. Cherie was accused of lacking style when she wore a trouser suit from Fenwick. Carrie is a communications professional so being silenced might prove difficult, especially if Boris follows in Tony’s footsteps and is in Downing Street for ten years.

It’s no surprise to hear that Cherie had a complicated relationship with her ‘crumpeter’ father, Tony Booth. Do we care? No. But I enjoyed the attention paid to the detail of her life by Parliamentary sketch writer Lloyd Evans. Looking back on Blair’s premiership it surprises me that he got away with so much – his closeness to Carole Caplin and then his affection for Wendi Deng suggests that he had some ‘Boris’ in him. Powerful men can get away with a lot of bad behaviour.

Having sat through Cherie – My Struggle it’s clear that it was smart of Marina to make such a timely escape.