Lightweight Dorries will make the BBC’s job even easier 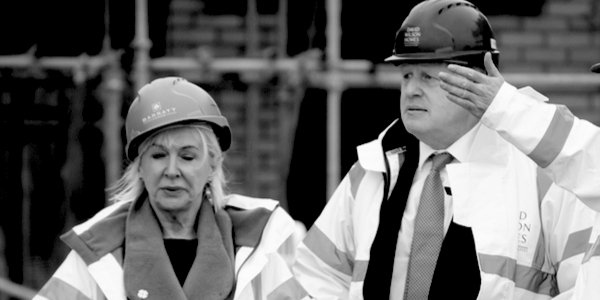 FOR both the BBC and the government department that’s supposed to oversee it on our behalf, September 2021 was quite the month for change. The Corporation got itself a new Executive News Editor, the ex-Huffpost UK editor Jess Brammar, while almost simultaneously the PM appointed a new Culture and Media Secretary, Nadine Dorries.

These two selections ostensibly portrayed the two sides of a struggle between a BBC fiercely resistant to any change in its illiberal, coercive, regressive-tax ‘licence-fee’ funding model or to any pressure to moderate its metropolitan-woke, Green-Left-‘liberal’ bias, against, on the other side, the voice of a public increasingly exasperated with its overt partisanship and absence of any attempt at editorial impartiality.

But is this picture correct? Or is it just elaborate theatre, a kaleidoscope of smoke and mirrors designed to conceal a unified stance and strategy between the supposed opponents?

The appointment of Dorries, formerly one of  the BBC’s most trenchant critics, in September’s ministerial reshuffle certainly gave the impression that the PM  was finally responding to growing public demand to get tough with the BBC. Why, the BBC might not even exist in a decade, a strong-sounding Dorries speculated, appearing the while not to be averse to the assertion that she’d probably drive the BBC executives loopy by then.

Her predecessor Oliver Dowden’s dripping-wet reluctance to do no more than bleat ineffectually had let the Corporation off the hook completely. Dowden did nothing to curb its excesses. Like his own predecessors, he shied away from reforming its iniquitous funding model.

Though pontificating on the BBC’s need for ‘far-reaching change’, Dowden singularly declined to use his position to bring any about.

It was predictable that the Left-leaning press would disapprove of Dorries’s BBC-threatening appointment: ‘An outspoken MP who has accused the BBC of being biased and harbouring “Left-wing snowflakes”,’ gasped the Guardian. ‘A committed social conservative’, huffed the New Statesman, alert as ever to the threat posed by such creatures to civilised, tolerant society, while the Evening Standard’s scolding focused on the shocking appointment of an ‘arch Brexiteer’.

Such a foregone conclusion prompts the question of whether Dorries wasn’t chosen exactly with this in mind, with a view to generating precisely the kind of Left-wing criticism that would reinforce the impression of a newly-robust Government attitude to the BBC?

The furore surrounding the appointment of Jess Brammar as the Corporation’s Executive News Editor was no less. Brammar’s stridently Left-wing, anti-Brexit, anti-Conservative, culturally-woke politics were highlighted as early as July when news of her probable appointment first emerged. Commentators rightly observed that, were the BBC to install in such an influential position a journalist with such a long and consistent record of publicly espousing ‘liberal’-‘progressive’ views, it would expose the Corporation’s increasingly unconvincing claims to ‘impartiality’ as a myth.

Nothing daunted, the Corporation risibly countered objections to Brammar, claiming these served ‘corporate interests’, oblivious apparently to the fact that BBC-style Green-‘liberal’ wokery is the default attitude of most of Britain’s biggest corporates. Brammar was, of course, duly installed doing the BBC’s credibility no good at all but, intriguingly, the day before Johnson’s Cabinet reshuffle.

Was the elevation of Dorries to Culture and Media Secretary, which took much of the press by surprise, a knee-jerk reaction to Brammar  or was there a hidden agenda?

You have to wonder. If the Johnson government, especially since Brammar’s appointment, wasn’t finding the BBC’s output pretty congenial, I’d be surprised. First, on Covid, it has continued to be a reliable and enthusiastic media conduit for possibly the most comprehensive and cynical programme of Government disinformation, fake data and psychological manipulation, aka behavioural-‘nudge’,ever projected by a UK government on to its own citizens outside wartime.

Second, more disturbingly, the BBC’s Director-General Tim Davie has emerged in recent days as the country’s most public advocate for declaring the entire issue of climate change to be no longer controversial and therefore de-politicised, allowing the Corporation to dispense with any requirement for balance or impartiality in its coverage. Davie confirmed that it would give full rein to its near-total endorsement of the Green eco-agenda by making it more central to all its programming. It was as if the BBC has unilaterally either re-written or abrogated the clauses of its governing Charter.

Coming just as COP26 started, and conveniently juxtaposed with Johnson’s disgraceful, scientifically-mendacious opening speech blaming Britain’s Industrial Revolution for the alleged global ‘climate emergency’, the BBC’s declaration must have been more than agreeable.

If there was any objection to this from our recently appointed Culture and Media Secretary, so apparently determined to clip the BBC’s wings that she even posited its demise within a decade, it was muted. Dorries’s visit to Glasgow and genuflection at the Shrine to Gaia by solemnly intoning the now ritual, semi-liturgical eco-banalities suggests that no such objection was even considered.

In contrast to the spin that Dorries’s appointment as Culture and Media Secretary presages a more robust and less benignly indulgent government attitude towards the BBC, it almost certainly means the opposite. Johnson never had any intention of curbing or reforming the BBC. Now, when on both Covid and climate the interests of the BBC and the Johnson government are so closely aligned, there is no reason for him to.

In short, Dorries’s calculatedly cynical appointment purports to throw a bone to anti-BBC campaigners but was never intended to be effective even were she inclined to pursue it rigorously. With her ill-advised excursions into reality TV and her exploitation of Parliament’s expenses rules to benefit her own family, she is a lightweight and an easy target for any anti-BBC initiative to be dismissed on the grounds of her record of poor judgment.

Her appointment was designed, I’d suggest, not to make life difficult for the BBC, but to do the opposite – to insulate it from pressure to change. The two BBC-related appointments of mid-September may look different, but they’re almost certainly fulfilling the same unified strategy.