NewsPaperthe art of publishing
HomeCOVID-19TCW's top blogs of 2021: Lockdown – the Big Lie that will...
0

TCW’s top blogs of 2021: Lockdown – the Big Lie that will never end 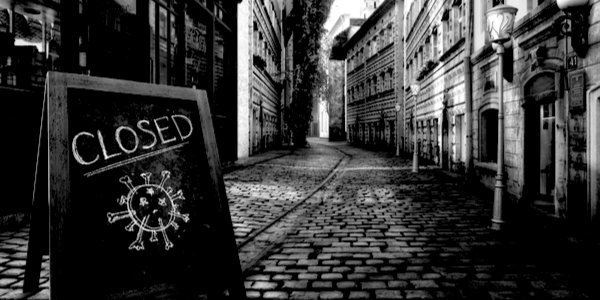 This is the fourth in our series of the 25 most-read blogs of 2021, in reverse order. It was first published on March 26.

ONE year after the Government announced a three-week lockdown to ‘flatten the curve’ of the transmission of SARS-CoV-2, there can no longer be any doubt that the position in Britain and elsewhere has nothing to do with any medical emergency, and probably never did.

This is not to claim there was never a pandemic, but that the policies enacted in response cannot be explained or justified by any reasonable concern for public health. Every element of the justification for the lockdowns that have been imposed across the world is baseless scientifically, without exception.

Further, the deception and repression which the implementation of lockdown has involved cannot be accounted for as honest errors or incompetence.

Censorship of alternative perspectives, the creation of a legal framework for installing a police state, and now the roll-out of experimental vaccines with questionable health benefits and seemingly zero political or social benefits (given that mask mandates and lockdown still persists) all indicate a conscious intention to deceive.

Again, lockdown has absolutely no relation to any medical emergency. The policy is based entirely on political criteria and implemented in the service of political objectives.

The extent to which the members of the current government and the national elite, the most mediocre in the history of Britain, fully grasp this is an open question.

A global plan can be conjectured from the common outlines of the policies executed across different states and nations. If this be the case, what is the political agenda?

One objective of the social control measures, not excluding the deployment of the corporation-funded militia BLM last summer, appears to be to infantilise and tyrannise the population as a preliminary step towards centralising global political-corporate control.

With the destruction of economic independence, the elimination of social differentiation and the reduction of the population into an aimless, shapeless mass (as distinct from the political elite) freedom transforms into a privilege, defined as the absence of its deprivation, and made conditional on political obedience.

Who or what is driving this agenda forward is more complex and subtle than a single centre of malevolence. The network which today controls the West is an aggregate of minor ethical defeats, shallow motives, misplaced loyalties, naked opportunism, faulty thinking, cynicism, greed, and megalomaniacal delusions.

It is composed of journalists and politicians, actors playing scientists and pharmaceutical executives, demented billionaires and agents of the CCP. And normal people, who for one reason or another wish to avoid confronting the reality that they are living in a world in which normality has ceased to function as an ethical position.

Many of the architects of the current situation don’t fully understand what they are doing. Some try to convince themselves that they are doing the right thing, others suffer no illusions, or no conception of a difference between right and wrong. Some believe they need to save the world. Others want only to save their jobs or reputations. What defines them generally is private interest, camouflaged by self-deception, which adds up to a collective enterprise which is moving in a certain way.

Those who stand to gain from the new normal include politicians, the media and other parts of the establishment. It whispers an opportunity to join the highest echelons of power, as permanent administrators of an ex-democratic country, to become powerful and rich in their own right, like the inner circle of the CCP. Directed towards this goal, they sacrifice the principle of justice, suppress all ethics, disregard entirely the welfare of the people, and affirm allegiance to an international consortium of corporate and political concerns.

The rhetoric of ‘decolonisation’ which now underwrites cultural agendas across the West is part of this dynamic. The colony is Britain, or other individual Western countries. The term refers to the revocation of national autonomy and the elimination of national identity, as the territory is placed under direct control, as in Xinjiang, Hong Kong or Tibet.

What BLM and LGBTQ+ designate are artificial categories stripped of specificity and context: they have no relation whatsoever to any authentic cultural or ethnic group. What Starmer, Biden, Schumer and Pelosi and the Metropolitan Police all kneeled before, as US cities burned last year, wasn’t racial justice, a propaganda fantasy of corporate strategy, but global power.

Trump was removed from power for attempting to represent the interests of Americans against the interests of the global corporate centre. Johnson, less the leader of an independent nation and more the satrap of the global empire, has no comparable ambitions for the British. As Sir Desmond Swayne noted in the House of Commons, speaking to empty benches in March last year, we are in a situation of State capture.

The faction which is today calling the shots is not concealed: it includes above all Bill Gates (whose foundation has invested heavily in Sage), the WHO, the Centers for Disease Control, Neil Ferguson, Chris Whitty, the Wellcome Trust, Imperial College, Johns Hopkins Medical School and lockdown advocates in other countries, including Anthony Fauci, whose US National Institute of Allergies and Infectious Disease supported ‘gain of function’ research on coronaviruses in the Wuhan lab now believed by US State Department analysts to be the point of origin for SARS-CoV-2.

Explicitly identified by Dominic Cummings in his testimony to the Science and Technology Committee last week as the architect of Britain’s vaccines planning, Gates is not a Bond villain operating on his own initiative. He is closer to a project manager, working in collaboration with partners including the CCP, other oligarchs and their foundations, and associated global corporate interests. The World Economic Forum is the central committee of these interests, but Klaus Schwab also is a functionary rather than the author of the enterprise, which has no single author. The ‘great reset’ is the work of a committee, not a single vision.

Hence the vagueness of a slogan designed to mean different things to different people, to the point where it is possible to reconcile within it the ideas of Prince Charles with Schwab’s transhumanism, the antithesis, under the rubric of a shared concern for the environment.

What now seems on the cards is less a reset than an acceleration of the devastation of the last two decades with technocratic globalism replacing democracy and capitalism, a doctrine of collective guilt, and privilege replacing freedom, and behaviourism replacing human dignity as homo imago dei.

In effect, lockdown will never end, but instead be concretised as a lockdown without walls. The device for achieving this objective is the vaccine passport.

Vaccine passports are not about vaccination: rather they will facilitate the implementation of a new system of control. For the elites, they will confer freedoms to move around a new world without borders. Meanwhile, the masses will not be allowed to leave their countries or cities, or eventually perhaps even their houses.

The destruction of the private sector and the immiseration of the middle class which has defined the economic story of the last twelve months have created the conditions for the second phase in the new order: the elimination of cash.

What is coming is a universal basic income, paid in digital currency which must be spent in global businesses on certain products, and cannot be invested or transferred.

Tethered to social credit, which will be linked to vaccination status and speech policing, those articulating opposition to the priorities of the new regime will be flagged for violations and cut off from accessing society, as easily as anti-lockdown scientists were removed from YouTube or the President of the United States was removed from social media.

Global government is not considering these policies: it has already decided on them.

In September 2019, ID2020, a digital identity initiative organised by Gates, launched a trial programme to ‘leverage immunisation as an opportunity to establish digital identity’ in collaboration with the government of Bangladesh.

These policies are coming to Great Britain. The campaign of psychological warfare of the last twelve months has consisted of an operation to render them not only plausible but desirable to the point where one now reads the amazing argument that the ‘vaccine passport gives us freedom’.

What is crucial to appreciate is there are no natural limits to how twisted and repressive this system can become. The record of the last twelve months, with the elites’ total disregard for human rights, the rule of law, and the principle of truth, together with a willingness to inflict endless suffering on other people, in the service of political objectives, in the context of a campaign of global psychological and economic terrorism, suggests no basis for extending any benefit of doubt.

Perhaps there are benevolent and wise authorities in whom, in circumstances of real emergency, society would be prepared to place its trust. But Bill Gates and friends, individuals seemingly devoid of any spiritual attainments, are not those authorities.

In the first phase of the pandemic, Gates Foundation-funded propaganda models projecting hospital capacity would be overwhelmed resulted in a policy to empty them by cancelling routine treatments and releasing elderly untested patients into care homes.

The policy resulted in the excess deaths of tens of thousands in the United Kingdom and elsewhere and a backlog of six million patients that will kill hundreds of thousands more.

Around the same time came efforts by public health officials to discourage and suppress cheap, simple and effective treatments to give pharmaceutical companies a captive market for lucrative experimental vaccines. This policy was similarly bloody.

The cruelty which the British government is now inflicting on young children continues to defy every standard of morality. Schools, which should never have closed, are now returning under a regime of psychological conditioning including pointless and obsessive testing and a mandate to wear dehumanising masks.

These measures have just as little basis in any medical necessity as the CCP/Gates Foundation lockdowns: they are psychological control techniques devised by Communist Party member Susan Michie and other Sage behavioral scientists to humiliate and compel submission, and amount to child abuse at a national scale.

Johnson, a man without convictions, or even the capacity to form convictions, has implemented all this in Britain purely for self-interest, weakness, and inertia, likewise his cabinet of pygmies, likewise broken robot Starmer, likewise Gates Foundation tools of Sage, likewise the police who have betrayed their oath, likewise the actors playing editors or journalists or conservatives, likewise everybody else who chooses to comply.