Lockdown toll reporting – our challenge to the media 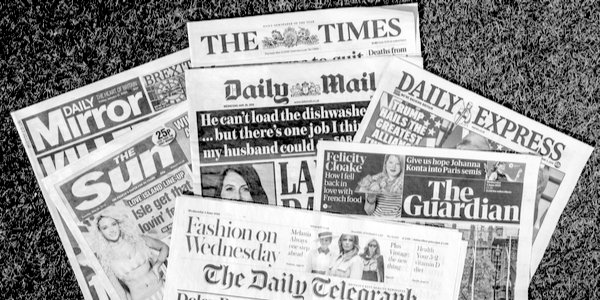 WHICH of our national newspapers or broadcasters are holding the Government to account over its Covid response and the impact of its lockdown policies on the health and social and economic wellbeing of the country?

Which are collating and running a regularly updated ‘lockdown toll’ in terms of non-Covid deaths, suicides and mental illness, missed screenings and treatment for cancer, hearts and hips, business closures, job losses and declining skills and educational attainment – to name only some of the collateral damage experienced in this country and globally? That’s just the start of a working list. Anyone remember US broadcast news outlets during the Vietnam war? A nightly toll of deaths was read out. I was working there in my gap year. It was deeply sombre and had a powerful impact.

But today the news outlets, including BBC, Sky News, ITV News, Times, Telegraph and Guardian have shown depressingly little inclination to systematically record and report the catastrophic toll lockdown has taken economically, educationally, health or welfare wise. In the context of their general failure to subject government policy to proper critical scrutiny and in the shocking absence of any government impact assessment, it is a terrible dereliction of duty.

Time and again the government has been asked for a costs-benefits analysis, both to date and in order to anticipate costs of future measures – such as the impact of Tier 3 on London – to no avail. But as irresponsible and high-handed as the government is, the sheer ignorance of the representatives of the Fourth Estate asking questions at Covid press conferences is embarrassing.

It’s not only such manifestations of ignorance, but the consistent failure of reporters to press for real information above and beyond the meaning of the latest ‘rules’ that appals – their failure to confront the government with the hard facts which are in the public domain. Like job losses. Like creating a work-shy and uneducated population. Like the collapse of care home inspection or halted GP visits over months. Like the deeply flawed and unreliable PCR testing on which the whole elaborate micro-managed lockdown, social distancing and isolation policies are premised. Like the possible corruption involved in granting billions of pounds of ‘Covid’ contracts. Like the abuse of our basic human rights. This, not the details of who we are allowed or not allowed to see at Christmas (rules that should be laughed out of court by any self-respecting journalist) is what they should be questioning the government on.

The ‘damage’ information is out there and it’s not hard to ferret out by investigative journalists (Ross Clark’s magnificent expose of hospital admissions in the Daily Mail stands out ); much is brought to light by brave medics like Professor Karol Sikora, by Lockdown Sceptics and this site. But it needs to be logged, updated and reported daily. Where is the regular log of hospital covid admissions and discharges? It is the job of the mainstream news media to provide that. With its still considerable power, its explicit capacity of advocacy and questioning, and implicit ability to frame political issues, it is their duty to balance their reporting of so-called Covid cases and deaths with Covid policy costs and damage.

Instead the Fourth Estate appears to have been wielding its significant social influence on behalf of the government. No amount of critical commentary on their opinion pages makes up for news headlines that daily pump out the government narrative – the latest (phoney) covid case numbers, furlough schemes and if we don’t behave ourselves lockdown and tier threats. It is this undue ‘respectfulness’ that has leveraged, rubber-stamped and enabled the continuation of government’s disproportionate and destructive path.

Where the collateral damage is reported, it is presented in a fragmentary way. It is shameful that it has taken a voluntary operation to try to rectify this and to do the MSM’s job for them.

Collateral Global, set up by the Great Barrington Declaration authors and Professor Carl Heneghan, have made an impressive start on pulling the data together on the toll taken on mental health, physical health, education and the economy. But it needs much wider communication and traction.

So here is our challenge and appeal to the conscience of the MSM. One paper at least must pick up the baton and run with this. The Daily Mail, Mail on Sunday and the Sunday Express are newspapers that have attempted to hold the government to account on some of this. The Telegraph needs to redeem itself.

The first to produce a running comprehensive ‘lockdown toll’ to which the ever-lengthening list of grim statistics would be added and updated, properly referenced from reputable sources, will get our vote. We at TCW would commit to regular links tracking their inventories of damage.

Only when this information is systematically and regularly presented will front-line political, social, economic and health editors start properly confronting government ministers when they have the opportunity. Only then will the public be able to make an informed judgement about the terrible cost and disproportionate nature of the government’s chosen path, and the anti-lockdown case be properly debated and understood.