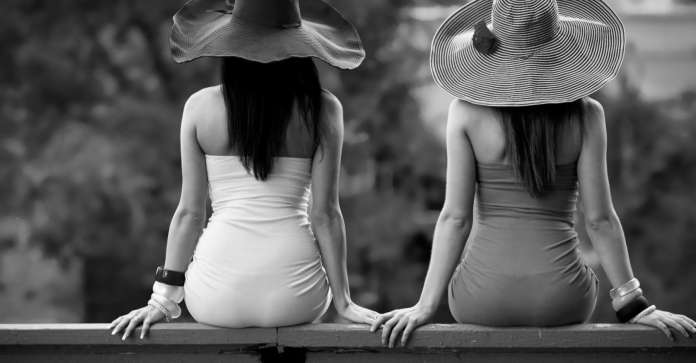 Hot summer sun brings the best out of England, a smile to strangers, barbeques and the smell of new mown grass. But there is often something missing. “I used to enjoy seeing the girls come out in their pretty dresses,” my elderly father commented. “Now they all look so awful.” My then 4-year-old daughter was more direct. In one of those loud voices that make you shrink, she demanded at the school gate, “Why are the mothers wearing their vests?”

I join Eleanor in thinking that vests are best kept as undergarments: very few show a woman off. But the mentality which sports bra straps in public is taken a quantum leap forward when a woman dresses on purpose as a “slut”.

I had never heard of SlutWalks before this week. The Canadian voice that spoke for them on Woman’s Hour sounded sweet and reasonable and, if I hadn’t understood English, I would never have guessed that this lecturer from Leicester was campaigning for women’s rights to dress saucily – and so beat rape.

Who doesn’t want to counter that burgeoning and unpleasant culture?  But the very idea that you do so by parading women in a state of semi-undress is bizarre. You don’t have to be savvy to know that clothes speak. Be it a soldier’s uniform, a bridal gown, or a nurse’s apron, each draws from us a response. The response is inevitably bigger if at the same time you tap into male sexual chemistry. In fact, stilettos and net stockings are used to advertise the streetwalker’s trade as surely as any taxi’s yellow light. It’s true that not every copycat intends this (and I don’t claim to be an expert at distinguishing one from another) but if you don’t want to be taken unfairly for a ride choose a different outfit.

This is all the unfortunate Constable Michael Sanguinetti apparently said when, in January 2011, he warned girl students at York University, Toronto, that provocative behaviour is risky. “I’ve been told I’m not supposed to say this,” he said. “However, women should avoid dressing like sluts in order not to be victimised.” One can imagine this fatherly policeman tossing aside professional protocol because he couldn’t bear seeing youngsters getting into trouble so unnecessarily.

The response was outrage. The Constable was disciplined and given “further professional training” while a few months later, in April 2011, the first SlutWalk was born. The campaign has apparently gone global, reaching me via Woman’s Hour. Linking provocative clothing to sexual assault is a “huge myth” they say and all it does is to “blame the survivor of a sexual assault while taking the onus away from the perpetrator”. A Toronto police spokeswoman assures us on the website that police are actually taught that “nothing a woman does contributes to a sexual assault”. The man is always to blame.

How grossly unfair, to both parties: to the women, that they should be given very false assurances, and to the men, that their raw instincts be exploited in this way. Our lecturer from Leicester had the answer, in the inevitable sex education. Children need to learn from the earliest age how to negotiate what is in effect our new sexual morality, whereby anything goes provided that the girl remembers next morning that she consented.  “I only have two sons,” she reassured us. “They are aged three and one, but I am already telling them that their bodies are their own and they should never let anyone touch them or touch anyone else without consent.” Poor little mites. What a world of fear to be brought up in.

All of this begs many questions but one which particularly interests me is why college students, who sit alongside each other during the day as equals, are prepared to divide into “Pimps and Ho’s” in the evening.  I read recently that theme parties of this kind are common on university campuses in the UK as well in North America. Professor Donna Freitas of Boston University, in interviewing young people for her book Sex and the Soul,  says that girl students feel empowered by the gaze of boys on their sexy selves, believing that they are calling the tune. She says that it blinds them to how demeaning their behaviour is, but then many lack self-assurance despite their college success. Taken at a deeper level, they are looking for affection in the wrong way.

Another American, Laura Sessions Stepp, says that bright girls have had the demands of a career so instilled into them that they crush out of their lives the ordinary desire to find a husband. The hook-up culture, which separates out sexual play from any sense of commitment, forms a distorted outlet for their sexual instincts.

But you don’t need to go to the universities to see this type of behaviour. Look outside any club where youngsters hang out of a Friday evening, and you can have a sad show for free.

All of us will find our own opportunities to be the Toronto constable, though hopefully with less opposition. A good decade ago, some brave women did their bit by creating a new teenage magazine, with the glamour but without the smut. They got the young people themselves writing most of the articles. T! Magazine is now online, and if you know some teenage girls do recommend it to them.

Others of us can lead the young by our own behaviour. How about mothers covering up the bra straps? Can we not encourage girls by making an effort ourselves?

Above all, we need the young to know that there is more to dress than pleasing the self. All of us have to look at them, and there is a lot of harmless pleasure to be had from seeing other people looking nice.