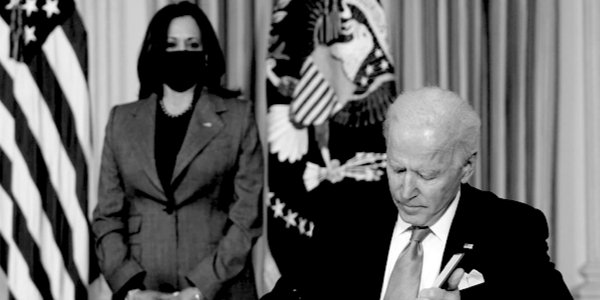 QUITE apart from the distinctive contrast in their personalities, Joe Biden’s election as president over Donald Trump was supposed to mean a soothing return to normality, the sort of ‘joined-up government’ that New Labour smugly promised for Britain in 1997.

Implicit in the Democrats’ Biden offer was that despite his palpable unfitness for the job, veteran insiders from the Obama administration would run things efficiently with Uncle Joe as an amiable and moderate figurehead. How different the reality has been.

Put to one side the often bumbling Biden’s personal issues of age and cognitive infirmity; they were discounted in advance and no one nursed great expectations of him – one target he’s managed to hit.

But not only has the supposed centrist sided with the socialist Left on spending on irrevocable new entitlements, his administration lies as shamelessly as it accused Trump of doing.

It has no qualms about acting unconstitutionally to get its way – as Biden did with his vaccine mandate for which he has no legal authority – or denying the televised chaos on the southern border, which it exacerbates.

Democrats seem to be going for broke while they can in case next year’s mid-term congressional elections break their hold on legislative power, which is more tenuous than their behaviour would indicate.

Former French president François Mitterrand had a sonorous phrase about the relationship between the French and their presidents. ‘Gouverner la France est une tache belle et difficile,’he said – ruling France is a hard and delicate task.

Likewise the fierce polarisation within the United States which Biden inherited but has done nothing to repair. Talk has resurfaced of the red and blue states seceding from each other to form separate countries. It’s hard in practical terms to see how that happens, but significant that the idea has regained currency after only nine months of Biden in office.

Some scoff at claims that democracy itself is under threat from the highly-focused Left’s radical demands for a different America, but there’s a kernel of sense to it. Certainly the fabric of democracy is being unpicked in ways large and small from one administration to another, with the danger that at some point it will tear under the strain.

The fight over the 3.5trillion-dollar reconciliation bill, which key Democratic senators Joe Manchin and Kyrsten Sinema have stymied by refusing to vote for, is an example.

Senator Bernie Sanders, chief author of the budget legislation, proposed a way round them; declare 48 a majority he said. Two senators should not be able to block what 48 other senators of their party want. (He didn’t mention the 50 Republican senators who also oppose the bill.)

For Sanders, a democratic majority is whatever number progressives can muster for a given piece of legislation. Biden threw in a spoiler of his own when he claimed that spending 3.5trillion dollars – which is only part of a package that could potentially hit six trillion – wouldn’t actually cost anything.

Money, it seems, is free – although it might be hard to convince Americans who are paying for five per cent inflation before the latest spending splurge even happens. Democrats have an explanation for inflation too; it’s temporary. This was true too of the 1970s, before it became permanent and intolerable.

The post-Trump Nirvana that Democrats promised has never happened. Biden has stumbled from one crisis to another,  whether it’s the politicised management of Covid, flatness in the economy which was supposed to boom, renewed dependency on imported energy, the fiasco in Afghanistan, the growing uncertainty about Taiwan and how the US would react to communist Chinese moves against it, the impasse with Iran, the flood of illegal immigrants across the southern border, inflation, generals going overtly political at the Pentagon and the proposal to put banks under the supervision of a Soviet-educated professor who wants to nationalise everybody’s bank account.

The list leaves you breathless, but is incomplete without the streak of authoritarianism in the administration that was absent from Trump’s government. Many of the January 6 Capitol rioters are still in jail awaiting trial, although real criminals – the sort who kill and steal – are bailed indiscriminately by prosecutors and judges.

More chilling is the decision of the Department of Justice to have the FBI investigate as domestic terrorists parents protesting against the teaching of Critical Race Theory in schools. The Left burned its way through a chunk of urban America with impunity last year. When mothers refuse to sit down and shut up at school board meetings, they’re domestic terrorists.

What makes this worse is that the threat was cooked up at the initiative of the Left-controlled National School Board Association, which approached the DoJ, according to leaked correspondence, for help in heading off attacks on CRT which opponents claim is being forced on pupils as fact. Where will the line on dissent be drawn if peaceful parental concern about what their children are taught is unacceptable?

Terry McAuliffe, the Democratic candidate for the governorship of Virginia – election on November 2 – said after the threat became public that parents had no rights over what schools taught. Now they know. But what else?