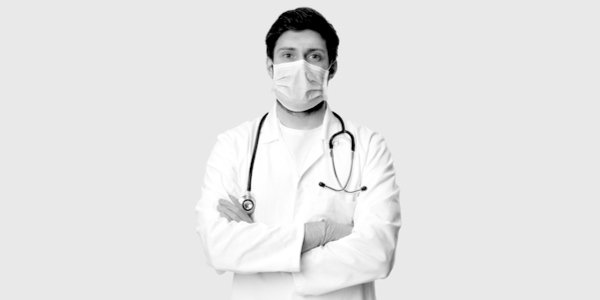 IT’S been a while since I saw a doctor, but when I did, he did not wear a white coat. In the UK, the white coat is judged to be unhygienic and authoritarian – made redundant by the NHS ‘bare below the elbow’ policy.

In the US, however, tens of thousands of medical students every year still don their first white coat during a formal ceremony that includes their swearing of the Hippocratic Oath. US physicians wear their white coats as a badge of honour, emblazoned with their name and standing. Research suggests that white coats make them feel more immediately identifiable and professional.

However, the white coat is today, like much else in medicine, under threat, having been appropriated by a ‘student-run’ movement called White Coats4 Black Lives (WC4BL), whose stated aim is to dismantle medicine and its ‘hierarchical, professionalised practice.’

John D Sailer, writing for the US National Association of Scholars, suggests that WC4BL has become more strident recently, emboldened by ‘the success’ of Black Lives Matter.

Its mission is to crush the ‘dominant, exploitative (medical) system,’ which it characterises as built on ‘anti-Black racism, colonialism, cis heteropatriarchy, white supremacy, and capitalism.’ It urges medical students and practitioners to ‘use their white coats’ to push for the ‘progressive policies’ contained in its ‘Vision and Values’ statement.

Unsurprisingly, WC4BL’s ambitions mirror those of most other Leftist ‘democratic’ organisations in calling for the provision of universal healthcare and increased access to abortion; missing the obvious fact that abortion already kills a disproportionate number of black babies.

WC4BL also demands ‘universal childcare and universal paid parental leave,’ prison closures, police defunding, and an end to immigrant detention. It would decriminalise all ‘sex work’ and drug use, break up oil and gas firms; pay reparations to the descendants of black slaves and return land to indigenous communities: Anarchy in the USA.

In sum, the movement exhibits all of the Utopian thinking of neo-Marxists and woke faux anarchists the world over.

Contemptuous of their own privileges and their chosen field of study, WC4BL activists dismiss Western medicine as a force for evil, ‘an exclusionary field that privileges wealthy, white, cisgender men’ who ‘have utilised violence to oust women and femme healers (to) monopolise medical care and knowledge’.

Its adherents cleave to the ‘pernicious superstition’ of ‘progress’ as a benefit in itself, as Dean Inge wrote. All existing standards must be reformed and replaced by a melange of confused short-term thinking, racism, misandry, and manic virtue-signalling.

The shocking thing is the increasing number of medical schools that appear willing to appease this baleful undergraduate cant and to permit its toxic ideology to infect their research, teaching methods, and curricula; compelling students and faculty alike to genuflect at the altar of Diversity, Equity, and Inclusion (DEI).

The contagion is spreading at an alarming pace. Recently, the Association of American Medical Colleges (AAMC) announced a new set of ‘Diversity, Equity, and Inclusion Competencies’ to be released to medical schools.

AAMC competencies are used to select entrants to medical schools, to design curricula, and for ‘continuing education’ courses for practising physicians.

The new competencies will require everyone to acquire ‘knowledge of intersectionality and of systems of power, privilege and oppression’ and will compel faculties to demonstrate that they ‘actively lead the promotion of social justice.’

Medical students have hitherto been found to be a highly conforming group, but these new requirements will lead to more ideological pressure and to the suppression of dissenting thought or action. They will discourage critical thinking, further erode meritocracy, and permit greater discrimination against any group judged to be ‘inappropriately successful’.

Without question, their introduction will teach people to strategically self-censor in order to ‘pass’ as supporters of DEI.

Recent successes for WC4BL include Michigan Medicine, where activists demanded that the curriculum be redesigned to include ‘an intersectional framework that incorporates Critical Race Theory (CRT)’. Changes were duly made and to show good faith, the work of professional ‘anti-racist’ Dr Ibram_X_Kendi was added to mandatory reading lists.

The University of Utah School of Medicine also capitulated after receiving similar demands. Its executive committee declared racism to be ‘a public health crisis’ that warranted immediate attention. In the middle of a global pandemic, faculty members found themselves required to solicit student feedback on their ‘cultural humility’.

Lest you consider that the UK might have escaped this particular virus, I can confirm that sadly, we are just as sick. Medical education and the behemoth that is the NHS have long been infected, with our particular national variant being known by the more appropriate acronym of DIE (diversity, inclusion, and equity).

Symptoms include a rash of ‘diversity experts’ paid to find racism and discrimination everywhere; LinkedIn reports that the UK has twice as many Diversity and Inclusion jobs per capita as any other country. The academy is awash with CRT and anti-scientific dogma that conflates sex with gender; and clinicians, lawyers, and politicians are unable or unwilling to define what a woman is.

Misinformation, censorship, and scapegoating are smothering critical thinking in medical research, education, and clinical practice to our detriment, as we saw during Covid and the mass poisoning by injection.

The NHS persists in recording a patient’s gender for fear of transgressing against trans mythology, rather than using the biologically, socially, and medically important fact of their sex, resulting in bizarre and wicked outcomes:

A policy called ‘Annex B,’ permitted the NHS to lie to a woman who was raped in a ‘single sex’ ward, causing her to question her sanity. I am not one to advocate litigation against public bodies, but I make the exception here.

Dr Hilary Cass, of the Royal College of Paediatrics, has just published her critical(ish) interim report https://cass.independent-review.uk/publications/interim-report/ into how growing numbers of children are being diagnosed with ‘gender dysphoria’ in the UK and how a ‘profound lack of evidence and ‘entrenched adult affinities’ is negatively impacting their treatment.

The NHS’s specialist Gender Identity Development Service (GIDS) carries on regardless, taking only a ‘child’s expressed gender identity’ as the starting point for therapy. This ‘affirmative approach’ is advocated by Mermaids, trans activists, and WC4BL spear-carriers.

The ‘one size fits all approach’ is poorly researched and has no long-term supporting data. Importantly, it ignores the many other issues that underpin gender confusion, including, abuse, autism, neurological damage, childhood trauma, or homosexuality.

Transgender ‘therapy’ and surgery is big business and constitutes a growing long-term market for psychotherapists, ‘gender’ surgeons, and Big Pharma and guarantees their revenues for the entire lives of these unfortunates.

It must be plain to any right-thinking person that there is something badly awry in medicine when it can so easily be overwhelmed by pernicious political ideology and moulded to serve the unevidenced, uneducated worldview of student social justice warriors.

Medicine needs to purge itself of the poisonous effects of the Left-wing Marxist worm that has infested its every organ. A failure to treat now will lead to its continued decline and demise.