NewsPaperthe art of publishing
HomeNewsMark Ellse: Far too many follow in the footsteps of St George...
4

Mark Ellse: Far too many follow in the footsteps of St George as Christian martyrs 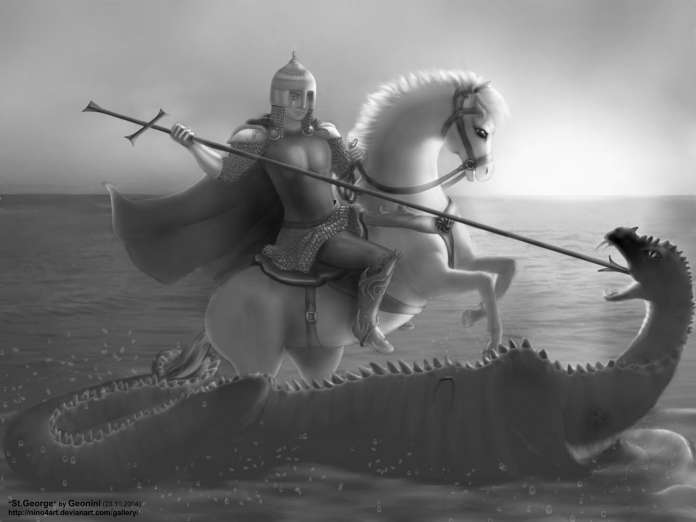 When one strips away the legend of St George – dragons, miracles and travel to England – the man remains. The little we know still makes him worthy of being our patron saint. Well-born, a career soldier, one of Diocletian’s best tribunes, he had a fatal flaw: he was a Christian. Despite entreaties and bribes, he would not bow down to the Roman gods. For this he was barbarically tortured to death in around 303AD.

It may seem a different world but sadly, as the events of the last few days show, it is not. At Garissa University in Kenya, on 2 April, 148 students were singled out and shot because they were Christians. On Tuesday, twelve Christian migrants were feared dead after they were thrown overboard by Muslim aggressors on an inflatable boat crossing the Mediterranean from the Libyan coast. Last week (10 April), 29 Armenian Christians, many of them children, were killed by a rebel rocket attack on Aleppo in Syria. On the same day in Lahore, Pakisan, 14-year-old Nauman Masih was brutally attacked and burned to death by two Muslim radicals after he told them he was a Christian.

The sea of statistics surrounding Christian martyrdom today is mind-numbing. Collectively, events like those above have produced huge population changes. The million and a half Christians, living in Iraq in 1990 are down by more than a million. Of Syria’s two million Christians before the ‘Arab Spring’, a million have been displaced and half of those have flown Syria. When we look at the scale of Christian martyrdom nowadays, it’s like the national debt, an exercise in statistics where the numbers are so large as to defeat us. Was it a million, or a billion?

At one level, persecution of the Christian church is a political issue. Naïve politicians, unaware of the potential for an evil greater than dictatorship that democracy has in the wrong culture, need to choose their foreign adventures with more wisdom. We need, too, to keep informing politicians about persecution and encourage them to speak out against it. We want them to be bold enough to provide peacekeeping at a cost which is greater than a few air strikes from a distance and to provide asylum for Christians who flee persecution.

But the undoing of evil needs to provoke an individual response. When we hear about a single child killed, we can identify with it and it moves us. When the numbers escalate, they paralyse us. When we can’t even imagine these numbers, how on earth can we do anything to ameliorate the situation? It helps to think about the very nature of suffering and how we might view many atrocities, compared with a single event.

C S Lewis cautions us against vague talk about ‘the problem of unimaginable suffering’. Two people suffering toothache is not twice as much pain as a single individual; it is simply the same suffering experienced by two people. The crescendo of suffering experienced by the Christian church today is horrifying in scale but no more evil, and indeed no less, than were it on a smaller scale. However we may be distracted by statistics, evil on a large scale is precisely the repetition of countless individual horrible evils. That doesn’t mean that it is more evil, or less. When we understand this, it can give us hope.

The scale of evil does not make us impotent, for we know  for  when we see it for what it is – the repetition of individual cases of horribly evil. God deals with us as individuals. He knit us together in our mother’s wombs, he numbers every hair on our heads, he knows our smallest needs. Each individual martyr, from St George to Nauman Masih he cares for as an individual. We can imitate Him, concerned not for the statistics of martyrdom today but to save individuals from evils that are more horrible than we dare think about. Barnabas fund is one of many organisations providing assistance to the suffering church. Probably a good way to celebrate St George’s Day.