NewsPaperthe art of publishing
HomeNewsMark Ellse: The louder Bercow squeaks about equality, the faster we count...
19

Mark Ellse: The louder Bercow squeaks about equality, the faster we count our spoons 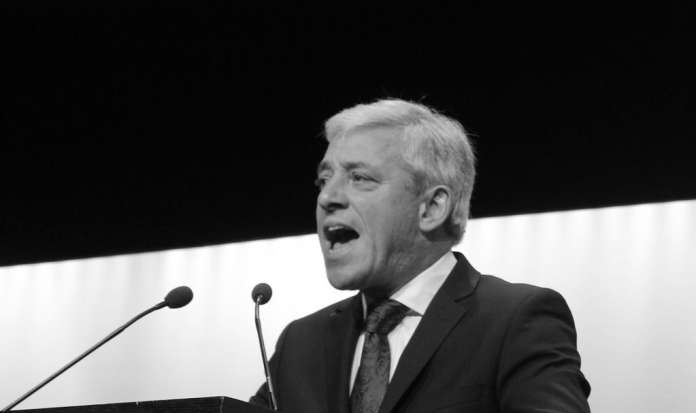 How on earth did Speaker Bercow, the best paid politician in the land, arrive at ‘All are equal’ as the motto on his taxpayer-funded coat of arms. Was he unaware of WS Gilbert’s ridicule (‘and all shall equal be’) well over a century ago, for such sentiments? Had he never read Orwell? Was ‘All animals are equal’ really foreign to him? Was his choice of words a result of his own ignorance of such literature, or of his belief in the ignorance of those who vote for politicians? Surely, without at least one of these, his motto would be considered to be satire.

Those who most preach equality believe in it least. John Bercow, like the Chief Executive of Oxfam who also chunters about inequality, gets a salary and perks in the top per cent or so of incomes in the UK. The man who proclaims ‘All are equal’ has commissioned his portrait for £35,000, claims £3,700 for two suits and runs up a bill of £177 for a four mile limo trip across London. They, from the public purse, are privileges certainly not extended all: Speaker Bercow reserves them for himself. It was ever so, but possibly never quite so blatantly. Perhaps Mr Bercow is himself deluded and in some strange way, just like Gilbert’s gondoliers promoted to kings, convinces himself that he is the epitome of equality. He may believe it but surely none of the rest of us do.

We might have forgotten the Bercow motto, have forgotten Bercow himself, had the Speaker sought a low profile. But we have been reminded of him this week by his pronouncement about the possibility of Donald Trump addressing the Houses of Parliament, something that Speaker Bercow much objects to because of Trump’s migrant ban and what he regards as Trump’s racism and sexism.

Let us put aside the obvious criticisms of Bercow’s statement. Forget that Donald Trump’s invitation to the UK is occasioned because he is the elected leader of our staunchest ally, not because of his personal views. Forget the unelected leaders of countries with much worse human rights that Bercow has welcomed without a murmur. Forget Bercow’s presumption in pronouncing without first consulting the Speaker of the House of Lords. Forget the ‘racist’ laws all countries have, including our own, imposing various restrictions on entry based entirely, like Trump’s migrant ban, on country of origin. Forget even the practical considerations of accommodating in one room both Bercow’s and Trump’s egos at the same time.

Let us only inspect Bercow’s pronouncements in the light of his own declared motto.

If indeed ‘all are equal’, if, as Mr Bercow says, ‘our support for equality before the law’ is a ‘hugely important consideration’, then those who are equal have equal right to their own views. Freedom of speech, freedom to elect the leader one wants, and freedom for that leader to implement the policies of those who have voted for him are all a consequence of the equality that Mr Bercow so much values. Mr Bercow preaches equality and a consequence of such equality is that different political views must be regarded with equal respect. It is as simple as that.

John Bercow doesn’t really believe in equality. He is a social liberal. He believes that his views are right and that socially conservative views are fundamentally wrong. The former are virtues, the latter vices and that is that. Bercow cannot see that, however grossly expressed, there is some truth in some of the things that Donald Trump says. Bercow pillories what he calls Trump’s sexism, failing to see the damage done by the liberal determination to obliterate the distinction of gender. He fails to see the integrity in some Trump policies as well, like it being better to be transparent about about entry restrictions than to pretend that our EU ‘freedom of movement’ policy is anything other than a disguise for our general action to keep other races out of Europe.

It has always puzzled me that it is the declared liberal, who most spouts for equality, that is most against free speech. While the conservative will hear all views expressed, the liberal wants to shout them down. It is the latter who has so much eroded free speech in Britain, turning our universities into places where subjects such as abortion and sexual ethics can no longer be discussed. WS Gilbert’s 1887 words were prophetic. About his mythical kingdom Barataria, ruled by egalitarian republicans-become-kings he writes:

This form of government we find

The beau ideal of its kind