Mark Ellse: Our nuclear funk starts on the Sheringham rocks 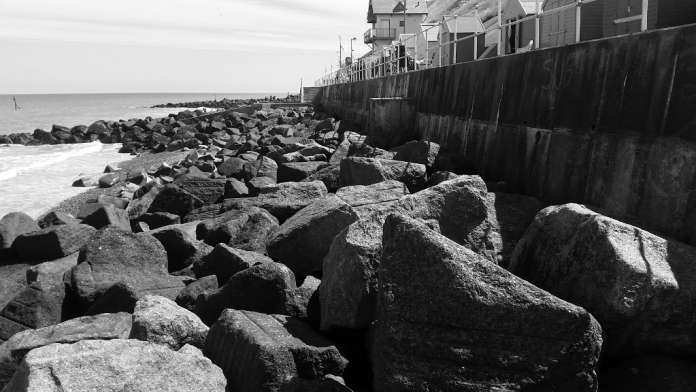 For a quarter of a mile along the shore of the Norfolk resort of Sheringham, large boulders protect the town from coastal erosion. That may be their primary function, but as small children our interest was in clambering over them. They were the playground of every child on the beach. As we grew taller, the game was go along the rocks, right from the fishermen’s slipway in the centre of town, to where the rocks peter out at the easterly edge. We jumped from rock to rock, always on our feet, always balanced, without putting a hand out or down to stop us falling.

We aquired the skill in our own youth and taught it to our own children as they grew up. It was one of those activities that kept one warm on the days too cold for normal beach activities. Later, I remember my children using it as something of a filter for potential boy – and girl – friends.

But no longer. Prominent notices along the shore proclaim, ‘Danger! KEEP OFF THE ROCKS!’ and, sure enough, these notices have gradually had their effect. Children no longer play on the rocks and, though habit and the natural inclination to disregard such nonsense meant that we braved them as normal, the number of accusatory stares we received when doing so gave us the feeling that we would soon be spoken to and face stronger pressure to desist.

Of course, it’s dangerous to jump from rock to rock. From time to time one slips, or pride causes one to put a hand out too late and one takes a tumble. Grazed shins are an inevitable consequence and I suppose that someone, some time, may well have broken a leg. But the real dangers facing children today are much greater than those presented by rocks. Are accident and emergency departments filled with kids having hurt themselves on rocks? Not at all. Rather, children are perilously inactive and face the dangers of obesity as a consequence.

Can we wonder that, despite the UK being a world pioneer in the field, there is no UK company to replace our own existing power stations? But what can we expect? What society that regarded walking on rocks as dangerous would be able to form the mature judgements necessary to keep alive its own nuclear industry? As a society we have this foolish idea that everything can be safe. We now have no sense of proportion. Any British company that wanted to build nuclear power stations would face a health and safety nightmare and be driven by bureaucracy into bankruptcy. Brave and bold we are no longer. No wonder British industry steers clear.