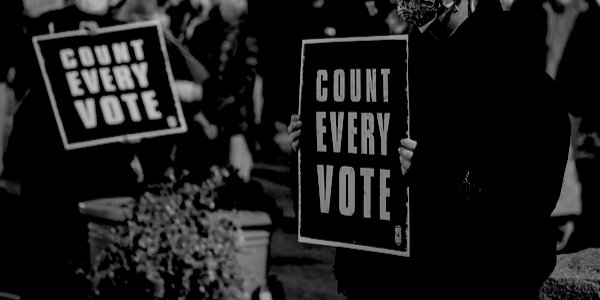 RELEASED in 1992, 10cc’s ‘comeback’ album Meanwhile was a commercial flop, as was the single taken from it, Welcome To Paradise.

Known only to diehard fans, it was a surprise to hear this obscure track feature prominently in the latest Mark Steyn Show. While Mark mordantly relates a selection of rum goings-on from America’s swing states during the past week, he is accompanied by the song’s refrain ‘There’s a coup coming on, a coup coming on.’

From which you will deduce that Mark Steyn is in no doubt that electoral larceny occurred during the protracted vote-counting in Pennsylvania, Michigan and other battlegrounds. In fact, he offers the savage summation: ‘Seventy million Americans are about to become victims of the greatest and most brazen heist in the history of modern, self-governing societies.’

No equivocation there. For Steyn, the ‘big picture’ is sustaining the small-c conservative uprisings of the past decade, which to his delight spread westwards across Europe until ‘the populism virus jumped the Atlantic and delivered Donald Trump to the White House’. But for the American establishment, previously unconcerned by plebeian revolts in faraway Europe, ‘It’s different in Washington: for four years everyone who matters has been determined to evict Trump from the Oval Office and to teach the American people that this is never going to be allowed to happen again.’

Promising that he ‘will never believe an official number ever again’, Steyn continues: ‘Notwithstanding the efforts of pollsters, media and Big Tech, the Biden blowout flopped because you losers declined to get with the programme. And so it became necessary for the Democrats to move to Plan B. When it became clear that Florida was going Trump, the counting in Philadelphia and elsewhere stopped, which I’ve never seen in any other country I happen to have been on election night. Counting the real votes had to stop because the Democrats needed to find some non-real votes. And fortunately, as they say on the cooking shows, they had some they’d made earlier. Here’s Joe Biden a few weeks back:

‘And we laughed because that’s just crazy Joe . . . They’re stealing the presidency in plain sight.’

To the ‘so-called conservative commentators [who] don’t get it’, and who ‘express bafflement at why Republican officials are being brazenly kicked out of these ballot counts, even when they’ve been ordered by courts to be admitted’, Steyn scolds: ‘You’re missing the point here: they’re teaching you a lesson in raw power. You’re on the outside and you’re not getting back in . . . the hard men on the low wards would rather you know that it’s all a lie, just naked muscle and nothing else. Because as in any corrupt society, the point is to force you to live with the lie – in this case that Joe Biden is the duly elected President of the United States. And they’re betting you will live with it.’

He hopes Trump will not fold. But aware that the faint-hearted Republican Party will readily ditch The Donald, Steyn has since written: ‘As I said on our weekend show, I am all in favour of him running in 2024 . . . But keep your eyes on the prize – which is to save and advance Trumpism.’

On America being ‘election-wise, a dysfunctional c**phole’, Mark acidly observes that whereas federal uniformity impinges unnecessarily on many mundane aspects of American life, the incongruity is that ‘for election to the only two national offices in the land . . . each state should get to decide how to steal the presidential election its own way’.

Steyn’s blog of November 4 had contained the reminder: ‘For a century-and-a-half America has exhibited a high degree of tolerance for brazen election corruption, almost all by Democrats (Tammany and its heirs), and once in a while – 1960, 2000, now – this has national consequences.’

Mark elaborates on this in the latest podcast, eschewing his customary weekend poem – ‘there is no poetry in this bleak land at the end of a fiasco of an election’ – in favour of readings from The History of Tammany Hall by Gustavus Myers and The Shame of the Cities by Lincoln Steffens.

The Democratic Party’s well-thumbed playbook remains unaltered and those bygone tales of municipal malfeasance still resonate. In his most recent blog Mark ruefully reflects: ‘Everything they’re doing in Philadelphia, for example, they’ve been doing since the nineteenth century. Biden’s biggest margins of victory (why, in some enthusiastic precincts he won 100 per cent of the vote!) are in the old familiar places that surprise no one.’

Steyn ends the latest podcast with his usual Last Call; however, on this occasion the dearly departed – June Aiken, a beautician from Jackson, Michigan, who died in February 2019 aged 98 – is neither well known nor recently deceased. Mark explains: ‘June was born in 1920 and died at a grand old age last year. Nevertheless, at the age of 100, June Aiken managed to request an absentee ballot, managed to fill it in and return it, and thus cast a vote in the 2020 presidential election. What an inspiration! America may be deceased but its glorious dead vote on, now and for ever. Which is why we may be changing the nature of our Last Call to focus on those thousands and thousands of Americans who have found the secret of eternal life: just keep voting Democrat.’

To both laugh and weep, the latest Mark Steyn Show, from November 6, can be heard here.