NewsPaperthe art of publishing
HomeNewsMatthew Walsh: Dave needs to chuck the kitchen sink at Ed after...
21

Matthew Walsh: Dave needs to chuck the kitchen sink at Ed after the TV debate no score draw 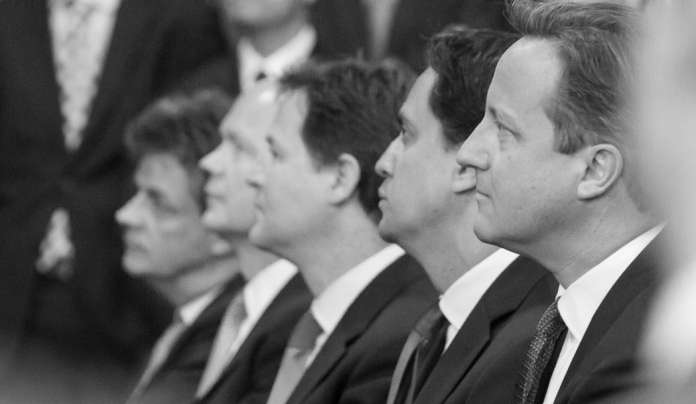 ITV played host last night to the seven political leaders. The set resembled that of Channel 4 daytime quiz ‘Fifteen To One’, presumably the only set in the UK that could accommodate such a large number of ‘contestants’.

There has been much talk about the debates and there had been a lot of concern that having seven party leaders was going to be a disaster.

ITV should be commended. It was, dare I say, an entertaining two hours and the format worked very well.

What were the buzz words of the night? NHS? Immigration? Austerity?

No. It was “Jonny”, “Terry”, “Joan” and “Rebecca”. Someone needs to sit Clegg and Miliband down and tell them far from making them sound like one of us, constantly repeating the names of the people asking the question is excruciatingly patronising.

This was an opportunity for the smaller parties to show their value and they knew it.

The Labour Party will wake up this morning disappointed with the outlook in Scotland and Wales.

Nicola Sturgeon of the SNP showed she has what it takes to be a formidable leader. To say her policies are worrying would put it mildly. But the real choice in Scotland is between the socialism of the SNP and the socialism of Labour and Sturgeon came across as confident and competent and her performance will have done little to quell the nerves of Labour Party strategists north of the border.

Although Leanne Wood’s haircut brought back memories of Sarah Palin, her policies did not. Wood and her Party of Wales are dedicated socialists and she made this clear. She had very little to offer on the policy front but her honest approach and down to earth nature was refreshing and she is clearly a Welsh patriot so again, in Wales, if it is a choice between two socialist parties (Plaid or Labour), why wouldn’t you vote for the likeable Leanne Wood?

Ukip leader Nigel Farage will be happy with his performance. On immigration he was inevitably on his safest ground and really is the only party leader to offer the public a straightforward answer – while we remain in the EU we cannot control immigration coming into the UK. Nigel looked relaxed and appeared to enjoy every minute. As much as Ukip spinners argue he did not prepare for the debate other than with a gin and tonic, the comment about 60 per cent of people with HIV in the UK coming from abroad was carefully placed. Nigel knows how to steal the headlines and carefully timed controversial comments such as this will anger those who hate him but there is a huge number of voters fed up with political correctness who will thrive on it.

The Green Party’s Natalie Bennet was the main loser of the evening. In England, the Greens were to Labour what Ukip are to the Conservative Party. Based on her performance last night there will be very few disgruntled Labour voters signing up to the Greens this morning. Bennet had not prepared well for the debates, whined on about climate change and the wonders of unlimited immigration and failed to focus on the real economic socialist principles which attract disenchanted Labour supporters. Caroline Lucas is the Green Party’s greatest asset and after last night, I would not be surprised if Bennet was deposed swiftly after May and we see Lucas return.

It was clear that Nick Clegg had prepared more than any other party leader for the debate. He was the overall winner in the 2010 leader’s debate so knew that this was his greatest opportunity to reach out to the British public. Clegg will be pleased with his performance, he couldn’t have done any better. His demand that Ed Miliband apologise to the British public for crashing the British economy was one of the best lines of the night and was a reminder that while the Lib Dems are polling abysmally, Clegg is still their strongest leader. The issue Clegg has is that while he came across quite well, the public do not trust him. In 2010 he was fresh faced and honest. In 2015 he is just another lying politician.

Miliband did not set himself on fire so a lot of pundits have hailed the Labour leader’s performance another success. He stared intensely down the camera and relied almost entirely on cheesy soundbites. There was no real evidence that he understood the economic situation Labour left the country in. His sentiment was anti-business and anti-aspiration and the politics of envy and cynicism. It is an insult to the British people when he lectures on the economy and immigration after Labour’s disastrous record in both of these areas. Having said all that, although Labour will have lost votes in Scotland and Wales last night, there are still a great number of people in England who will vote for them because they are not the Conservative Party.

The Conservative Party will be pleased with Mr Cameron’s strong statesmanlike performance. There will be some disgruntled Conservatives who will have voted Ukip in the European elections and flirted with the idea of voting Ukip in May who may reconsider after seeing the stark contrast between Miliband and Cameron and the dangers of Labour sneaking in to Number 10 on the back of a rising Ukip vote.

This in itself will not win back enough Tory voters to make a fundamental change though.

CCHQ should readdress the core messages of the campaign. The ‘long term economic plan’ slogan is getting a bit tired.

Desperate times call for desperate measures. The Tories remain stagnant in the polls so the time has come to adopt an aggressive negative campaign against the Labour leader.

Voters need the fear of God put into them, a very real and possible fear that although Miliband may look harmless, resembling some sort of fun Jim Henson creation, his politics and beliefs could destroy Britain.

Share
Facebook
Twitter
WhatsApp
Email
Previous articleRev Julian Mann: Kew Gardens versus Garbage City, Cairo. The power of the Cross rings out in the slums
Next articleReader’s Comment of the Day: Opponents of marriage want to make women hostages to the state