NewsPaperthe art of publishing
HomeNewsMatthew Walsh: What is the point of the Lib Dems? Even Clegg...
0

Matthew Walsh: What is the point of the Lib Dems? Even Clegg cannot tell us 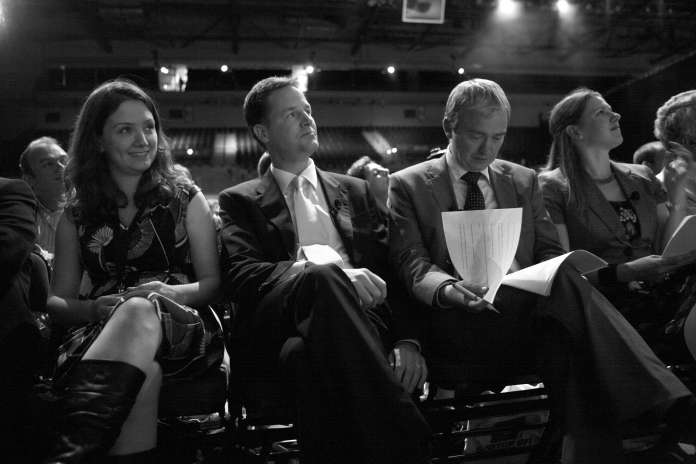 The Sky News debate title was emblazoned across the screen – “What is the point of the Lib Dems?”

Minutes later, presumably after an irate phone call from a Lib Dem press officer, the title changed to “are the Lib Dems still relevant?”

It doesn’t matter how it is worded, the point is, nobody knows what purpose the Lib Dems serve.

Clegg’s address to the few remaining party members in Glasgow yesterday reinforced this.

In full patronising sanctimony, Clegg proclaimed how the Lib Dems had turned Britain into a liberal utopia. Rather than a speech, Clegg would have done better to take out an advert in The Guardian.

I caught something about the fact gay marriage was “designed and delivered by Lib Dems”. I am sure the Prime Minister was delighted his mate Nick was taking all the credit for a policy the PM sacrificed half the Torygrassroots to push through.

Quite bizarrely, Nick decided to talk about when he got obliterated by Mr Farage in the televised EU debates. I can only assume it was some sort of therapy to try to come to terms with the trauma of being mauled by nasty Nigel.

I lost interest pretty quickly in his false, “I am just an ordinary bloke” approach.

I did however feel a little sorry for Clegg.

He has come in for a lot of criticism of late. The Lib Dems have plummeted in the polls and the press have been scathing.

They are a victim of their own success. It is easy to forget that Clegg got the Lib Dems to where they are now. He got them into Government.

How many Lib Dem members would have thought back in 2009 that they would be in Government for the next five years?

The Lib Dem faithful should be delighted, no, scrap that, they should be over the moon!

Nick has delivered. He has given them a pointless referendum on whether to change the voting system. He has wasted God only knows how much money on free school dinners for the children of millionaires. He has passionately promoted all of their pointless policies in Government.

Up on that stage, Nick looked knackered. One should not underestimate how being in Government can age a man. Clegg has had a busy couple of years. When he hasn’t been breaking promises to his devoted student following, he has been tirelessly defending his parliamentarians from numerous accusations of sexual impropriety.

Unfortunately for Clegg, he will not remain Lib Dem leader for much longer. Party members can be an unforgiving bunch and he will almost certainly be made redundant come May 2015.

Unfortunately for the Lib Dems, Nick’s demise will not make them anymore relevant.

I switched on the television the other evening and there was an odd chap on stage pulling funny faces and telling awful jokes.

I thought BBC Three comedy had really gone down the pan, until I realised I was watching BBC Two and this was the highlights of Lib Dem conference.

The man on stage was Lib Dem darling Tim Farron.

Farron is supposedly the future hope of the Lib Dems.

If this is the case, the Lib Dems will not just be pointless and irrelevant, they will be finished. They need only look as far as Labour to learn an important lesson – weird doesn’t work.