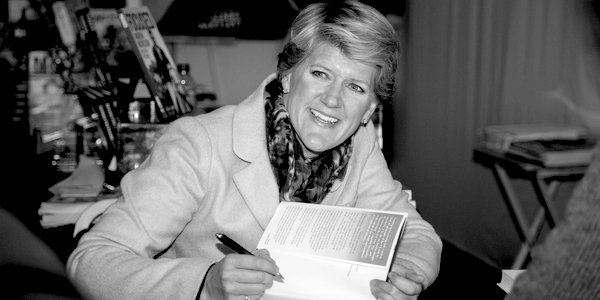 How many businesses does Clare Balding run and what is their turnover? How many employees do each of these businesses have? I am just wondering because Ms Balding would quite like to start meddling in everyone else’s business.

The Telegraph reported yesterday: ‘Clare Balding has called on businesses to stop rewarding aggression and alpha behaviour in the workplace in order to allow women to rise to the top.

‘Addressing the Telegraph’s inaugural Women Mean Business Live summit, Balding said companies have “generally rewarded aggressive behaviour,” adding that all businesses could benefit from using 360 reviews to make sure people aren’t getting away with intimidation, or inappropriate behaviour”.’

The Telegraph then recorded that Balding added, without any apparent sense of shame, ‘Jimmy Savile wouldn’t have happened [if there had been such a thing].’

You see how simple it is to stop paedophilia – just have a ‘360 review’ and all will be solved.

Companies have rewarded aggressive behaviour, you see, and that is a problem. And who are the more aggressive of the two sexes? Why, men. Dastardly men and their risk-taking and inventiveness and building companies that produce goods and services we want to purchase and employing people. It’s irritating and must be stopped, according to business expert Balding. Notice how you have to ‘allow’ women rise to the top. Well, speak for yourself. Thatcher was not ‘allowed’ to rise to the top, nor Theresa May. They just did it, like all the men before them.

At this great gathering in London there was talk about the menopause and how women should ‘feel less guilty about your kids’. Lovely. Allison Pearson said: ‘Guilt is to motherhood is what rain is to Swansea. You might as well buy a bloody good umbrella and ignore it.’ Do you hear that, folks? If you are neglecting your children, just march on and ignore your conscience telling you this is not right. Next week Allison will be telling us how awful it is that kids spend so little time with their parents and how something must be done about the teenage mental health crisis. Just you wait.

Somebody at some point said this: ‘If we want the dual income economy we have to have a system that works for both parents.’ Who is this ‘we’, exactly? Do ‘we’ really want a dual income economy? Does she know what that means – that both parents must work full time, all of the time? Who will look after the kids? Who is going to call in granny? Who will run the voluntary associations? The churches? The Girl Guides and the Boy Scouts? Is the market to devour everything before it – men, women and children? Does the Telegraph understand how much we would have to grow the State to fill the gaps left if the entire economy was ‘dual income’? Is there any conservative left at the Telegraph?

The lovely Rt Hon Penny Mordaunt was there. She had some strong words for the men. Yes, indeed. Mordaunt hailed a new era for women in the workplace where they should no longer have to endure being ‘patronised and at worst being assaulted by a generation of men that elevated confidence to entitlement’. There you go, men – you belong to an entire generation that has elevated confidence to entitlement and as result have been assaulting and patronising women all over the place. This is one of those policies the Tories are going to sell on the doorsteps, right? How awful the men are? I can tell you that is going to go down a treat.

Listen, I have no problem with feminism or any other type of movement that seeks to lift women. But I have no time for the type of feminism that wants to tear men down, and it sounds to me as if that is really what is going on here. The women want to steal the boys’ football and run home.

Let’s get rid of all the macho behaviour and the matriarchy will arrive. A matriarchy, that if the last few months is anything to go by, will abolish due process, trash the presumption of innocence and consist of a lot of women shrieking about how they are just a few steps away from being harassed. I can only hope I’ll be dead before that particular matriarchy arrives.

It is surely not a coincidence that this gathering occurred on the same day that researchers at the LSE seemed devastated by the fact that boys and men remain ambitious.

The Mail: ‘Research at a British university has found that women have advanced in fields such as law and accountancy but men remain in the best-paid and most prestigious management roles. A report says that a major cause of this is the redoubled efforts from males to compete for the best jobs. Researchers at the London School of Economics warn this could stunt the progress being made to eradicate the gender pay gap.’

This is indeed irritating – when men and women select for themselves professions that the bean-counters at the LSE say will mess up their gender pay gap statistics. Only today, in the decadent West, could male ambition, which I’m sorry essentially built the civilised, advanced society the feminists and rest of us enjoy, could be seen as a bad thing.

The Mail goes on: ‘Analysis of the research has found that boys born in 2000 “have higher aspirations than previous male generations in terms of income, to the point where the gender pay gap could actually become larger than it is at present if these aspirations are fulfilled”. Men continue to dominate in science, technology, engineering, finance and politics, the report said.’

You can just sense the panic in their voices down at the LSE. The total and utter fear that boys still hanker after the money and women want ‘less well-paid fulfilling careers’. What shall we do? Maybe we should go full Egyptian Pharaoh on the boys, those nasty, ambitious boys with their risk-taking. Sure, we all know that they will just grow up and be rewarded for their ‘aggressive and alpha behaviour’ as well as terrorise all the women around the office, if the good Ms Balding is to be believed.

So it’s the full Pharaoh, or if that is too extreme, direct discrimination against men and boys. That is what will be called for next, mark my words.