NewsPaperthe art of publishing
HomeNewsGung-ho messages, Gareth, should not be given kneeling
160

Gung-ho messages, Gareth, should not be given kneeling 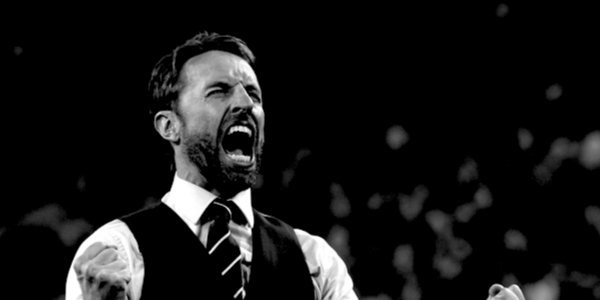 GARETH Southgate has done a remarkable thing, and I’m not talking about his success in taking his England squad (so far) to the semi-finals of Euro 2020. Last month he wrote an open letter to the Players’ Tribune, a media company that provides athletes with a platform to connect directly with their fans, praising the socially enhancing benefits of shouting for your national team. The fact that this may not have been the primary intention of his letter in no way diminishes this aspect of his message.

It’s a refreshingly old-fashioned take on what has become an issue of the moment – the behaviour of players and fans alike, and the power of the beautiful game to bring people positively together. Before every England game, he tells his players, he says, that ‘when you go out there, in this shirt, you have the opportunity to produce moments that people will remember forever. You are a part of an experience that lasts in the collective consciousness of our country . . . You remember where you were watching England games. And who you were watching with. And who you were at the time . . . Why do we care so much? Like with our own memories of watching England, everyone has a different idea of what it actually means to be English. What pride means.’

Stirring stuff. However it’s not all sweetness, light and international friendship. The old rivalries still lie close to the surface. This is most immediately seen in the quasi tongue-in-cheek reporting from newspapers stretching way back to 1966, when England played Germany in the World Cup final and one journalist wrote, ‘If, on the morrow, the Germans beat us at our national game, we’d do well to remember that, twice this century, we have beaten them at theirs.’ And now, on an almost daily basis, Rod Liddle serves up a plateful of cod xenophobia in the Spectator, taking a viciously mischievous delight in the rivalries. ‘I like the fact that they all hate each other.’ ‘Poor Scotland, you’d need a heart of stone not to die laughing.’ ‘You should hear the Austrians when they talk about Slovaks.’

I know all about this tribal hatred from personal experience. When I lived in Glasgow, my house stood on the corner of the main road leading to Ibrox Stadium, and on the day of an Old Firm match, the tidal waves of supporters from both sectarian sides had to be controlled by mounted police, and young children’s ears protected from the blasphemous ranting.

Southgate’s letter went on to say, ‘Our players are role models. And beyond the confines of the pitch, we must recognise the impact they can have on society. We must give them the confidence to stand up for their team-mates and the things that matter to them as people. I have never believed we should just stick to football . . . It’s their duty to continue to interact with the public on matters such as equality, inclusivity and racial injustice, ‘You should hear the Austrians when they talk about Slovaks.’ while using the power of their voices to help put debates on the table, raise awareness, and educate.’

And this is where many disagree with him. By all means, ‘give racism the red card’, but it is both an infringement of the UEFA ban and a serious misunderstanding of the political aims of the BLM movement, for him to allow his squad to ‘take the knee’ so publicly, in full view of millions of viewers and spectators.

It has resulted in the only downside of the tournament so far – the spectacle of fans booing their own national side. Disapproving fans have stated that the gesture has lost its original meaning and is being misinterpreted. In reality, it is doubtful whether the fans, and even the players themselves, have a real understanding of where this gesture originally came from and what it was intended to symbolise. Football may bring all groups, ethnicities and colours together, but its pitches are no place to play out the identity politics agenda, and both Southgate and the FA are naïve in thinking that the kneeling gesture has no connection with the extreme-left politics of the BLM movements.

Rio Ferdinand, the former England defender, has called those who disapprove ‘ignorant’, and claims the gesture has nothing to do with politics. He states it is all about racism, about people being treated the right way and respectfully. But there’s nothing beautiful about kneeling down. It’s divisive and defeatist, a symbol of humiliation. If it wants to make a meaningful gesture, the game needs a whole new initiative to replace it.

The final paragraphs of Southgate’s letter make a more compelling, and unifying, plea to combat racism when he stresses the importance of personal conduct in the ways that football can inspire and bring people together.

‘When England play, the result is just a small part of it. It’s about how we conduct ourselves on and off the pitch, how we bring people together, how we inspire and unite, how we create memories that last beyond the 90 minutes . . . that last forever. I think about all the young kids who will be watching this summer . . . And I hope their parents, teachers, and club managers will turn to them and say “Look. That’s the way to represent your country. That’s what England is about. That is what’s possible”.’

This is great stuff, but anyone who intends to get that message across with pride and dignity, has to say it standing up. This evening at Wembley would be an excellent place to start.