Complaints are perennial about the sometimes blatant left-‘liberal’, pro-EU, pro-Green bias of BBC Question Time, in the selection both of panels and audiences. However, they have recently been given significant backing, at least as far as allegations of the programme’s institutional anti-Brexit bias is concerned, by some old-fashioned investigative journalism.

In summary, since the EU Referendum, Remainer panellists have outnumbered Leaver panellists by nearly 2 to 1, and no fewer than 86% of the panels have been Remainer-dominated.

So it was intriguing to come across this article in The New Statesman by former BBC grandee Roger Mosey, on how the programme format might be changed by its new editor.

In fairness, Mosey was one of the very rare voices at senior level in the BBC, not only to detect its innate metropolitan-‘liberal’ bias but also to go public with admission and criticism of it. It won him plaudits from journalists with no reason to sanitise it.

But his New Statesman article alludes to the bias issue only very obliquely, and the changes it suggests would, in effect, not so much alleviate, much less eliminate, the bias as invite it from a different source, under the guise of improving the quality of the programme’s output.

Briefly, he suggests panels with fewer politicians, largely ignoring those from outside the two main parties, and spending more time on ‘major topics’. But, significantly, he also favours inviting more experts, academics and scientists ‘who know their subject inside out’, to explain things more clearly.

There are some glaring flaws with this. Presumably, however, the BBC – apparently so out of touch with the vast majority of the country that doesn’t inhabit the politico-media bubbles of Westminster, North and West London that it was utterly shocked by the EU Referendum result – would think we non-metropolitan proles would be too dim to notice them.

First, as we’ve had demonstrated to us all too vividly over the past two years especially, but also before that, the so-called ‘experts’ are frequently – and sometimes spectacularly – wrong. The polling experts told us a defeat for Remain was unthinkable. The Treasury experts warned us it would cause a year-long recession. They were both wrong.

Going back further, the CBI experts harangued us that for the UK not to join the euro would be a disaster. They were wrong: the true disaster has been near 40% youth unemployment in the Southern European economies. Economics expert David Blanchflower in 2009 predicted 5million unemployed if UK public spending was cut. He was wrong too.

Central banking expert and Bank of England Governor Mark Carney assured us an ‘immediate and profound economic shock’ would follow a vote to Leave. Not so. ‘Pensions expert’ Baroness Altmann (still, incidentally, using her peerage in the unelected House of Lords to try to derail Brexit), predicted a fall in equity markets after a Leave vote. They rose instead.

Next, apart from their prediction errors, the experts, academics and scientists are just as prone to bias in their judgments as politicians. I wrote on this site only a month ago of the massive Left-‘liberal’-Green bias among UK academia, and particularly of its pro-EU bias. 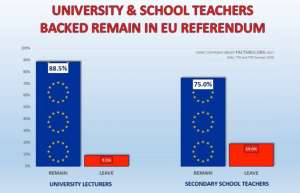 Couple that with the BBC’s inherent Left-‘liberal’ pro-EU bias, and it isn’t hard to guess the direction that most experts, academics and scientists invited on to a new-format Question Time by the BBC would probably be coming from.

There are other objections. It would be interesting to analyse all the questions asked on the programme over, say, the last two years. My guess would be that between half and two-thirds were questions whose answer had to be based on a value or moral judgment, in contrast to factual data or empirical evidence. In other words, purely political.

Which leads on to two other factors. Although there’s been a constant trend in recent decades of elected politicians outsourcing their legislative and even administrative decision-making powers to unaccountable outside bodies – whether externally such as to the EU and UN or domestically to tribunals, quangos and NGOs – actual policymaking still largely rests with them, certainly more than it does with academics and ‘experts’.

So shouldn’t it be primarily the politicians’ views that we need to ascertain, certainly on what, for all its faults, is the most-watched political programme? As it is, we have precious few means and opportunities even to semi-hold them to account, isolated from their party scripts and special advisers. That shouldn’t be diluted further by replacing them with substitutes who are immune from democratic verdict.

Additionally, if the programme is always by its nature destined to be more political than empirical, the suggestion of excluding minor parties looks almost designed to entrench two-party hegemony. Insurgent political movements challenging the established parties are at a disadvantage anyway under our First Past The Post system: restricting their access to prime-time political TV just looks anti-democratic.

If the BBC wants to change the composition of Question Time panels, it could do worse than dropping the vacuous celebrities whose bien-pensant virtue-signalling might send a frisson of excitement through the BBC’s metropolitan culture-warriors, but who contribute little else.

Padding Question Time panels with experts and academics, though, is the wrong answer, and on several levels: not least that it substitutes bias from one source with bias from another one, less easily discernible.