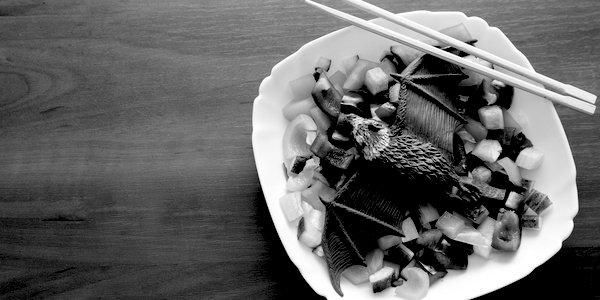 SOME things have improved due to the Chinese habit of eating bats: children now have to sit in rows, spaced out, facing the front. Most teachers, even those purporting to teach history, don’t know that this was once the norm and worked well for hundreds of years. Pubs are now going to close at 10pm. Many have forgotten, but from 1914 until November 2005 that was quite usual, giving rise to wonderful publican banalities such as ‘Time, gentlemen, please!’ ‘Haven’t you got a gnome to go to?’ and ‘We’re not running a night-club here, you know.’

This part of licensing law was scrapped to allow the wholesome habit of twenty-four-hour drinking, vomiting, littering and defecating in our streets.

Apart from those good points it seems we are on a downward slope with Covid again, obvious to anyone who still goes shopping. This week I noticed with dread yawning gaps where toilet rolls in all their clean white purity used to be stacked. No one wants to get caught short again. Retailers insist that there were shortages last time only because the lockdown happened so quickly, but no doubt food hoarders will soon start filling their chest freezers. My ‘unconscious bias’, or as I call it, ‘reasonable mistrust’ of fellow shoppers is adding to my distaste for shopping. I now wear a visor as I peruse the emptying shelves. It looks ridiculous but is an improvement on masks. Paper ones gave me a frenzy of itching while the cloth variety dragged my ears out of my head.

I also shop for a neighbour aged 94, who has been shielding since March. He has recently been in hospital for high blood pressure and complications with diabetes.  Doctors do not go in for ‘fat shaming,’ and the only thing they seem to have suggested is that he should take up eating jelly babies. Perhaps they meant him to choose them as a low sugar alternative to his usual two bags of toffees, but the message he’s brought home is that he now has to eat them as well as the toffees.

His diet is like one of those documentaries about how we lived in the 1950s; tins of rice pudding, custard, minced beef, those Frisbee-shaped containers of steak & kidney pie, and canned peaches. Also, bumper bags of crisps, and gallons of lager.

I have a problem getting it all into my car, which is now loaded up like a builder’s yard. I attend art groups on Mondays and Fridays. It used to be a simple matter of going along with paint, palette, turps and packed lunch. Now you have to take your own ‘virus free’ easel, painting board, table, dust-sheets, lashings of hand sanitiser and coffee. I bought a folding table from Halfords. Like this whole wretched situation it came from China, with no instructions about how to make any sense out of it.

I do not like seeing my little car with its back seats permanently flattened, but so many small details of ordinary life have had to change. This is the way of the future and only now can we see what we’ve lost; people no longer go to their orchestras, theatre groups and choirs. Some of us are now getting together to paint a live model, but it’s difficult to afford the studio and the model’s fee with only five of us.

People had worse to contend with in the last war, but on the home front a great deal was provided, people were better fed and clothed than ever before. It was also a time of intense social cohesion, strict rationing, community singing and communal canteens with all classes encouraged to get together. This virus is about being selfish and isolated in an already deeply materialistic society where people already lived in their own bubbles with the generations particularly estranged. For years we’ve heard that the old have stolen everything from the young.

Just before autumn set in, I cancelled a self-distancing lunch with a friend and threw myself into the river, not as an act of despair, but my last chance to swim about in something like a dirty salad before it gets too cold.  People unable to use regular swimming-pools and desperate for exercise have been taking to the river, rowing, paddle-boarding and swimming like never before. Not since Lewis Carroll rowed with Alice and her sisters has there been so much leisure activity on the Thames. So, there is yet another good thing to thank the Chinese bats for!