NewsPaperthe art of publishing
HomeNewsMunich: The Edge of War
88

Munich: The Edge of War 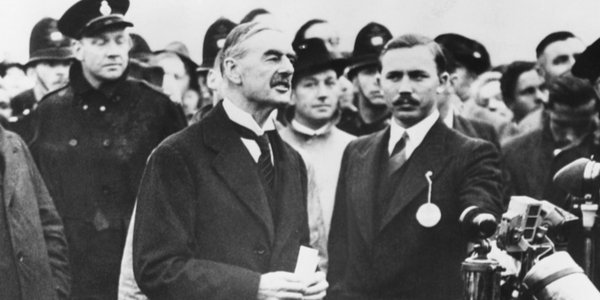 Eighty-four years ago, Adolf Hitler was threatening to annex Czechoslovakia’s German-speaking Sudeten border region while our government looked on aghast, terrified of a second Great War. Today, Russia’s Vladimir Putin is seemingly on the brink of marching into Ukraine, amid fears of a wider conflict.

It’s not an exact parallel, of course. In 1938, after describing the German-Czech situation as a ‘quarrel in a faraway country between people of whom we know nothing’, Chamberlain sold out the Czechs. On September 30, following a meeting with Hitler in Munich, he returned to a hero’s welcome in Britain, waving his piece of paper and declaring ‘peace for our time’.

Right now, it’s unclear what will happen over Ukraine. But as Patrick Benham-Crosswell opined in TCW yesterday, ‘deploying hundreds of thousands of combatants from at least three nuclear powers’ seems  ‘a bit of overkill’ to settle a dispute in which there are no UK or EU interests at stake, and for which we are ill-equipped. Not to engage in warlike theatrics for a country that is not in Nato is hardly comparable with Chamberlain’s road of appeasement.

So what about the film, which is based on Robert Harris’s book Munich? I’m sorry to say I found it disappointing.

It centres on two fictional characters who studied together at Oxford – Hugh Legat, who went on to become Chamberlain’s private secretary, and Paul von Hartmann, a German who is now a translator in the Reichstag.

Hartmann learns from a stolen secret document that, despite Hitler’s claim that the Sudetenland is his final territorial demand, the Fuhrer is planning a war of conquest in Europe.

When he and Legat meet at the Munich peace conference, he tells his former university pal of his discovery and they try to persuade Chamberlain to walk out of the talks. It’s no spoiler to tell you they fail.

So, since we already know the ending, the only interest is in seeing how the film gets there. But I found the plot clunky and implausible, with the narrative jumping jerkily from one scene to another.

Legat, played by George MacKay, is supposedly a Civil Service hot-shot who has risen high very quickly. But he comes across as a wimp and a bit of a jobsworth. He won’t even confide in his wife about the deteriorating international situation.

Jeremy Irons as Chamberlain is impressive. However, he plays the PM as a much stronger and forceful character than the walrus-moustached, wing-collared, umbrella-toting, frail-looking old man we see on the newsreels. He is accompanied by a coterie of toffish ministers and diplomats whose advice he is not afraid to override.

This is to back the film’s main theme that Chamberlain was really a tough nut, cunningly trying to buy time by throwing the Czechs to the wolves. A peace deal would give Britain breathing space to rearm and have some chance of surviving the Nazis, then defeating them. But was the PM really playing for time or just cravenly giving in? The question is debated still.

Hitler is unconvincingly played by German actor Ulrich Matthes, who was an equally unconvincing Joseph Goebbels in Downfall. He could never hope to match the late Bruno Ganz’s brilliant portrayal of the Fuhrer in Downfall and doesn’t come remotely near it here.

Some parts of the plot are frankly ludicrous. Would Hitler really borrow a wristwatch from Hartmann, a minor official whose name he didn’t even know? And would the Fuhrer’s security team – ever wary of assassins – really leave him alone with anyone outside his inner-circle cronies?

Other characters seem to be awkwardly stitched on. Hartmann meets another old pal who now happens to be one of Hitler’s SS bodyguards. For no obvious reason, he is suspicious of Hartmann and turns up in stops and starts, trying in vain to pin something on him.

We are also treated to a brief and baffling cameo from Heinrich Himmler, who walks into Hitler’s office then walks out again – and that’s it. Then there is the girl from the Whitehall typing pool who turns out to be an extremely unlikely deus ex machina.

The trouble with these ‘what if’ twists to history is that they end up being confusing and unsatisfactory, offering a narrative we know didn’t really happen which we try to reconcile with the actual events. Another danger in these history-averse times is that some benighted viewers might believe the fictionalised version.

Surely there was enough material from the Munich conference to make a more engaging drama without needing to lay on the ‘faction’ too thickly?

For instance, the film only briefly mentions that the Czechs were excluded from the conference while their country was dismembered, then abandoned to Hitler’s tender mercies – a betrayal of the highest order.

Then there was Chamberlain’s astonishing gullibility in the face of Hitler’s duplicity, which might have been explored more. While the PM apparently trusted the Nazi leader, Hitler regarded Chamberlain as a ‘silly old man with an umbrella’ and had no intention of altering his war plans. Was the PM just stupid? Again, the debate has never really ended.

For all its flaws, the film is watchable and successfully evokes that fraught and fateful era. And it might just reawaken interest in what was a pivotal part of our history. But I doubt if Munich: The Edge of War will have you on the edge of your seat.

Share
Facebook
Twitter
WhatsApp
Email
Previous articleShould we get entangled in Ukraine? The short answer is no
Next article‘I couldn’t function as a non-jabbed human being in Australia’