My old church is going to the doggerel 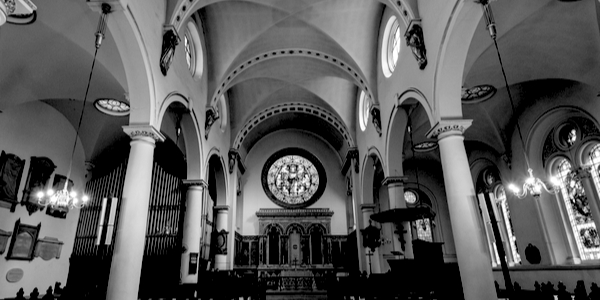 THERE’S a lot more sensitivity and finesse at St Michael’s, Cornhill than in the days when I was Rector at the City of London church. The other day I received this notice concerning a change of service from Choral Evensong to the Office of ECO-SONG, to coincide with the COP26 climate summit currently in ‘progress’ in Glasgow.

It features an anthem with words by the Rev Malcolm Guite, who is described as ‘one of the leading Christian poets of our time’. Well, that’s what it says on his own website.

He modestly claims that his influences include George Herbert and T S Eliot, and certainly Guite is quite a wondrous phrasemaker in his own right. For instance, he says his aim is ‘to be profound without ceasing to be beautiful’, as if any literate person ever thought beauty and profundity to be at odds.

Guite is also a lyricist who sings his own songs in the style, as he puts it, of blues, rhythm and blues and rock band. And he plays the guitar. When I say ‘plays’, I mean he strums it in the style of those ten million teenage lads who thought they were the Beatles. That is to say, he mostly repeats the usual three basic chords of the diatonic scale. Besides these accomplishments, he bills himself as a theologian concerned with ‘the intersection of art and religion’.

But let’s listen as he tells us more about his exploits at St Michael’s.

‘I was approached by the composer Rhiannon Randle to write some words for a piece on the theme of creation and the environment she had been commissioned to compose for St Michael Cornhill. We both felt that the church needed prayerfully to address the crisis of climate change.

‘The lectionary readings for the occasion seemed strikingly prescient and appropriate: God’s wake-up call. What emerged as I began writing, was a long cry of the earth, an appeal from nature herself, which Rhiannon could set into song. So I wrote Our Burning World . . . Rhiannon is a brilliant young composer.’

Not so much wake-up as woke-up.

I’m afraid I haven’t the space to say all I’d like to say about Rhiannon’s brilliance, so let’s turn directly to Our Burning World.

Our burning world is turning in despair,

I hear her seething, sighing through the air:

‘Oh rouse yourself, this is your wake-up call

For your pollution forms my funeral pall . . .

I know I’m only four lines into it, but I have yet to detect the influence of either George Herbert or T S Eliot.

Now, as Ezra Pound said, poetry is language charged with meaning to the greatest possible extent,soI am sure you will enjoy the rest of the work:

My last ice lapses, slips into the sea,

Will you unfreeze your tears and weep from me?

Or are you sleeping still, taking your rest?

The hour has come, that puts you to the test,

Wake up to change at last, and change for good,

You are my children, I too am God’s child,

And we have both together been defiled,

But God hangs with us, on the hallowed tree

That we might both be rescued, both be free.’

I sit here shuddering at the fact that such abject illiteracy and weary wokery should have been combined in the Service of Evensong and that such a concoction of paganism, pseudo-science and doggerel was the menu where, if we looked for poetry, we turned to the Psalms as set for the day in the Book of Common Prayer; and for our tunes we thrilled to Thomas Tallis, William Byrd and Orlando Gibbons rather than the work of Rhiannon Randle which, after all, I’m glad I didn’t have the space to write about.

This is no intersection of art and religion. This is a train wreck.