My view from the Lord Mayor’s coach 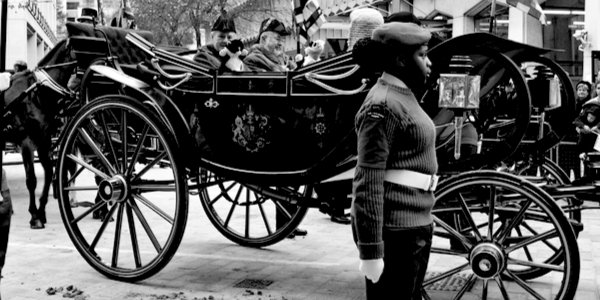 IF I had been riding in the Lord Mayor of London’s golden coach, I would have got out and performed an impromptu service of exorcism there and then in Fleet Street. Last Saturday the sociopathic idiots of Extinction Rebellion (XR) sat in the middle of the road and stopped the annual Lord Mayor’s Show procession as it made its way from the City to the Law Courts.

I’m not being fanciful when I speak of riding in the state coach. As Lord Mayor’s Chaplain I did just that in the Millennium year.

Lord Mayor’s Day 2000 dawned with a drenching and a gale. We sat under the striped canopy on the balcony of Mansion House while less privileged souls stood beneath in the wind and the rain to watch the pageant: the regiments with their military bands, A Life on the Ocean Wave . . . Men of Harlech . . . pride and nostalgia.

Then the steel bands from Hackney and Brixton and the whirling dancers exotically under-dressed for the weather. The fire brigade and the Red Cross, police, pensioners, postmen. A single Lancaster bomber roared the RAF’s fly-past. Tremulously, I led the procession down the external staircase and for the short ceremony on the steps of St Paul’s and then by coach to the Law Courts. The Mace-bearer leant forward and said, ‘It’s OK, I’ve got the carrots!’ Traditionally, the carrots are for the horses.

It teemed down all the way, but still thousands from all over London and beyond crammed the pavements and waved their flags. It wasn’t a case of oiks doffing their caps to toffs. Those cheering, drenched people were celebrating something which gave them their own sense of identity. Despite the great egalitarian brainwashing which has gone on since the end of the Second World War and which has reached insane proportions under wokery, people still have the urge to defer to something or someone they esteem and value. And the nature of what you value shows you what you’re worth. People will revere something. Better a 900-year Mayoralty than a C-list celeb.

The Law Courts are pure Gilbert and Sullivan and on this historic but light-hearted occasion the exalted legal principals grinned like characters from one of the Savoy operas. The new Lord Mayor was presented to the Lord Chief Justice and to the Recorder, whose speeches were all erudite banter and name-calling incorporating the more salacious remarks of the ancient Greek orators. Things were running late and I had ten seconds before the coach left for the journey back to Mansion House to grab two glasses of champagne to refresh the Lord Mayor before he had to be out in the street again acknowledging the greetings of his public. In fact things were running very late and the Sword-bearer said that, if we didn’t get back to the delayed luncheon reception soon, he would eat the horses’ carrots.

So what happened at this year’s disruption at the hands of ER? Not much, except inconvenience to the merry throng. A City of London Police spokesman said: ‘We are aware of a group of protesters in the City today. We are engaging with the group to minimise disruption.’

XR said they were trying to deliver the ‘Children’s Charter’ to the Lord Mayor. It read: ‘We stand here the day after Cop26, which has failed to bring about the action necessary to tackle the climate and ecological emergency, to call on you to prioritise the next seven generations above the short-term greed that focuses on wealth accumulation right here in the City of London.’

There is a glaring inconsistency at the centre of XR’s hideous hypocrisy. They claim their desire to ‘save the planet’ for the sake of the human beings who live on the planet and – with a bucketful of sentimentality worthy of Charles Dickens himself – particularly those children to come over the next seven generations. And yet by their actions they disrupt and despoil the lives of those who actually live on the planet.

Meanwhile, our police ‘engage with’ this narcissistic, self-regarding, virtue-signalling horde.

What should the police have done? Unglue ’em and lock ’em up.