Never smile at a Brocodile 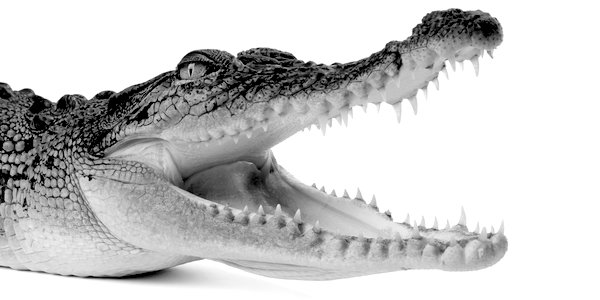 WELL, they’ve voted for the WA (and PD) at the Second Reading, though not for the accelerated timetable – they need to make sure the egg is fully addled before stamping the lion mark on it.

Some call this BRINO (Brexit In Name Only), calling to mind a horned but myopic and generally placid herbivore. No, it’s a Brocodile: a sly and lethally patient raptor, waiting for a bumbling gnu new Prime Minister to blunder into its wide, toothy smile. Old and crafty, it strikes with saurian speed at a negotiator’s vulnerability.

At this point, the waterhole metaphor breaks down, for it’s not BoJo’s neck that will be twisted in the EU’s death-roll. He spoke airily of dying in a ditch rather than delay Brexit; now we do have that delay, and absent a miracle we shall certainly not have Brexit. But A B de P Johnson will be all right – perhaps he’ll take his little black book of contacts to an investment bank, like A C L Blair.

No, it is we who shall pay the price. In cash, in EU disenfranchisement, in the semi-detachment of Northern Ireland, in ceding control over fishing, taxation, business subsidies and other areas. In financial ruin, if the eurozone collapses while we are still co-guarantor for the European Investment Bank’s debts; finally, perhaps, in blood and wreckage, if the EU’s ambitions for Empire and command of UK forces tempt them into fatal overreach.

Our leaders were never going to outwit the EU’s, who resemble the kind of lawyer who could write your will and surreptitiously make himself the sole beneficiary.

Nor does our Government have much to fear from the Opposition, who are determined only that whichever way Pussy goes through the catflap she should still be stuck in the house. With all their procedural tricks, they are not an Opposition but a Subversion.

No, it is we who are the enemy. How long and at what cost did we fight to cage an overmighty Crown within Parliament; and how much longer was the battle for universal suffrage, even now less than a century old? We are John Major’s ‘bastards’, we, who opted to Leave, with our stubby pencils.

Yet so powerful are our combined voices that they must be muted. First Past The Post and the Boundary Commission result in a House of Commons where only some 220 MPs secure a majority of votes cast in their constituencies. But that’s not enough. Democracy depends on informed consent, and Power wants managed consent instead. Enter mass communication technology (from newspapers to radio, TV and beyond) and mass psychology, and the counter-evolution of the masses’ awareness of power relations. Over the last few years growing numbers of us have become sceptical about mainstream news, feeling that our perceptions are being moulded by selection and suppression of facts and spin.

The new social media allowed a hundred flowers to bloom, briefly. After the flowers, weeds: online disinformation campaigns have sprung up – the paid political trolls, the 77th Brigade and so on.

Moreover, in our modern atomised society, where we drive to the supermarket in closed cars rather than rub shoulders in the classical forum, offline we have limited direct experience of what our fellows are thinking. So the dead tree press have an opportunity to shape public opinion by the way they report the results of opinion polls.

For example, the Sun said ‘Brits tell MPs to vote for Boris Johnson’s agreement’, based on a YouGov poll which also revealed further down that only 17 per cent of the general population thought it was a good deal, as opposed to 23 per cent who considered it a bad one!

Or how about the Daily Mail, which did a savage handbrake turn on Brexit when Geordie Greig took over the editorship? It commissioned a Survation poll and concluded that half the nation backs Boris’s deal. Yet if you drill into the poll https://t.co/kiRyQXmIJA and look at Tables 59 and 60, you’ll see that more people ‘strongly opposed’ the deal than ‘strongly supported’ it (and only two-thirds of respondents answered that question anyway).

It’s Them v Us, I’m afraid. It was deeply ironic to watch ex-PM Mrs May castigating the Opposition in Parliament for failing to honour the statutes they helped enact: withdrawal from the EU, and the triggering of Article 50.

Did they mean it? she asked. Well, did she, when she came to the Commons three times with her Withdrawal Agreement? Or her successor, who has returned with much the same, plus lipstick? Or those who now call for another Referendum, with a choice of a rotten deal or Remain – the latter being the one thing that was definitively ruled out in 2016?

Yes, we are being pushed into the jaws of the Brocodile. And I’m not smiling.