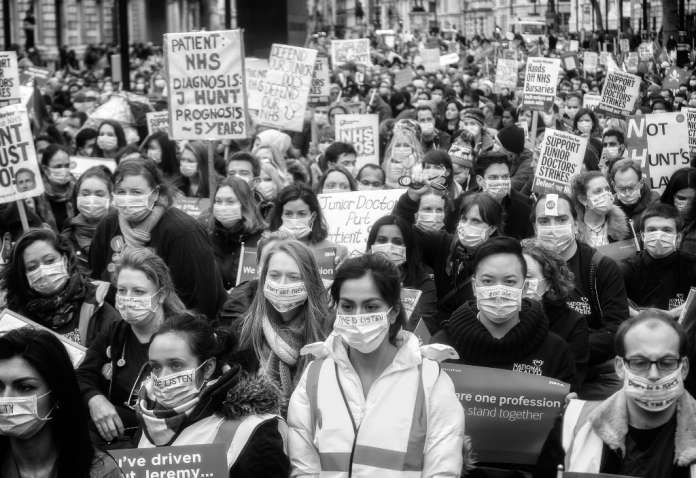 Hi! I’m Pippa and this is Raj. We’re junior doctors just back from a fab picket outside the Royal Infirmary. It was like being in Billy Elliott!

You can see us on YouTube, with all our placards. They’re hand-crafted – I did mine before ward round yesterday.

You’re lucky. My consultant told me off for doing that instead of bagging up the bloods.

Anyway, Raj, shall we talk about our slogans? I’d like to start with my ‘Save the NHS’. It’s a bit boring on its own, so I added this big red heart.

It’s not from med school. It’s off an old Valentine card.

How romantic. I’ve got a few here: ‘Our NHS Not for Sale’.

Well, it wouldn’t be worth much while we’re on strike!

And this one: ‘Stop Privatisation’. It’s so bad that we get private healthcare from the BMA. Just don’t get sick, that’s what I say.

I’ve got: ‘Stop the Patriarchy’.

Well, Jeremy Hunt for a start. This contract is totally sexist.

Yeah, I agree. Just remind me why, so I’m singing from the same hymn sheet.

Her sheet! It’s quite simple – 60 per cent of junior doctors are female. That’s why I’m a feminist.

I didn’t do anything about gender, but I’ve got this clenched fist. It symbolises Black Power.

You are so right, Raj. Any black doctor would be traumatised by this imperialist government.

I also thought of using the communist symbol. But the FH1s might think the hammer and sickle are surgical instruments.

Yes, standards are slipping. Hermy had a board today saying ‘Tired Doctors Make Mistakks’, with a deliberate spelling error.

She shouldn’t put that. What would the Daily Mail say if we got the patients mixed up? It’s much easier to blame the nurses. We need to be smart with these messages. That’s why I’ve got ‘Save Doctors, Save Patients’.

Well, obviously our contracts must be sorted out before we can deliver all that evidence-based practice.

Bart thought he was clever with his ‘Junior Doctors Hunted to Extinction’. But you can’t beat mine: ‘Hunt is Cruel’. A little doctoring from my past stint as a saboteur!

Of course. Why do you think I chose medicine?

Share
Facebook
Twitter
WhatsApp
Email
Previous articleKen MacIntosh: IDS was right to try to get the sick and disabled into work
Next articleLaura Perrins: Refugee games. Children are recast as political pawns by the Left