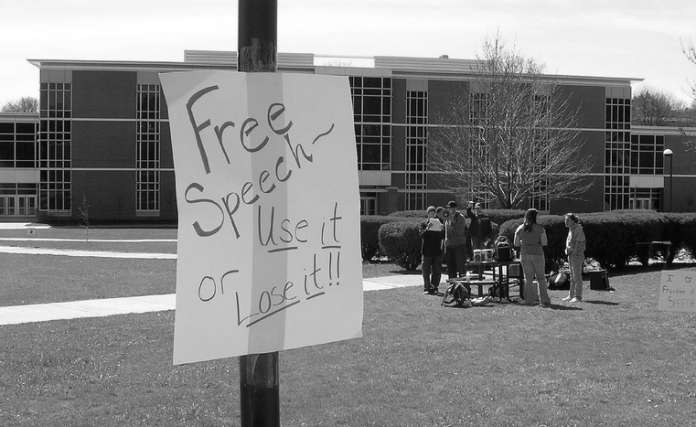 Freshers at University of Chicago last autumn were in for a surprise. Against the tide of safe spaces, trigger warnings and protections against the perils of spontaneity, the university’s leadership decided that enough is enough. From now on, students would be welcomed to an authentic academic ethos of critical thinking and debate, freed from the dogmatic constraints of political correctness. This radical move may be too early for British universities, but this ripple on the Gulf Stream is promising for anyone who finds the current atmosphere stifling.

Free speech is not political. It should not belong to the Left or the Right, but undoubtedly the former is currently most censorial. The liberal-left establishment, as understood by social conservatives, is a settled political and administrative class who graduated in the 1960s onwards, reinforced by an offspring brainwashed in the education system. The younger generation of social justice warriors carry the baton onwards, using identity politics to demand freedom from speech.

Such freedom is not absolute. I have written for the arch-libertarian Spiked website, but also for Rupert Sutton’s Student Rights, which campaigns against extremist speakers on campus. The boundary between provocative assertions and incitement may be blurred, but in some cases the latter is blatant: numerous young students have been radicalised by firebrands promoting jihad in our high seats of learning. Generally, however, we should allow controversial opinions to be heard, allowing them to be exposed, challenged and rejected through reasoning. With inspiration from the Furedi family, I propose this three-point charter for free speech on campus.

An Islamic society, atheists or LGBT group may organise events specifically for members, but there is no reason why interested students or staff from outside the membership should not attend. By definition, the purpose of university is to inform and enlighten, not a safe space for vulnerable groups. In a public institution, events should be as open as possible. While lectures or debates organised through the auspices of the student union are not normally restricted, positive action may be needed to publicise beyond society membership. Preaching to the already converted is a missed opportunity. It is preposterous, for example, to ban men from a debate on abortion.

Benjamin David of University of Warwick Atheists, Secularists & Humanists, invited Maryam Namazie, an Iranian feminist who regards Islamic society as patriarchal oppression. After completing the formality of informing the students’ union, David was told that the event was cancelled, due to concerns about Namazie’s ‘inflammatory’ views, which ‘could incite hatred on campus’. This led to David and others founding the campaign #Right2Debate, which proposed that when a society or student union wants to ‘no-platform’ a speaker, students can challenge this decision. If a petition is signed by 25 students, the union could insist on the event being restructured as a debate, with an opposing speaker. However, this may be impractical, and it relies on student representatives with censorial tendencies. ‘No-platforming’ should be banned on campus. The default should be that speech is permitted, within legal limits, with all speakers exposed to a right to challenge.

In the minds of many students, debate means something hazardous. In their social bubble, valid opinions are determined by groupthink. Ann Furedi, chief executive of BPAS, the UK’s largest independent abortion provider, described a protest by Cambridge University Student Union Women’s Campaign to stop a debate on disability and abortion. She found the students’ reasons childlike. The motion was ‘biased’ – well, of course. Speakers would gain ‘credibility’, and listeners might be influenced. Protestors issued a statement: –

Debate is a conversation of power, where the objective is to win, to overpower the other side. This is violence.

Although on the same side of the argument as the protestors, Ann was dismayed by this Philistine encroach at one of the world’s most prestigious universities. Too often, authorities shirk their responsibility to nurture debate, cancelling events rather than confronting a minority who are spoiling the intellectual experience for others.

Instead of being used to curtail speech, the concept of safe space should be redefined as a forum for candid exchange. As Howard Jacobson argues, ‘the more educated we are, the less we are prepared to tolerate views contrary to our own.’ Universities are failing thousands of young people, who don’t hear different opinions or engage in dialectical process, and thus don’t develop intellectual and emotional resilience. Jacob Furedi, as a student at UCL, described the oppressive student union officers:

From their assumption that students are too vulnerable to be exposed to certain ideas, to the imposition of what they deem acceptable moral values, their influence means that the university experience is now a far cry from the rigorous, mind-expanding education that one might expect.

Defending debate should not be left to a few courageous activists. Institutional support and guidance is needed to liberate the academic milieu. Freedom of ideas should be emphasised in the prospectus: –

Welcome to Grand Old University. You will be encouraged to participate in debate on topics within and beyond your chosen field of study. As a Russell Group university, we take our academic mission seriously, nurturing free speech and tolerance through reasoned and respectful discourse. Engaging with people of different backgrounds and perspectives, you will develop your skills in hearing and interpreting beliefs expressed by others, and in testing and refining your own argument.

I mused on a fourth point, on dealing with personal attacks of speakers on social media. However, the hysterical reaction of Twitter storms is best ignored. As one of the most respected voices for free speech in academe, Frank Furedi puts it quite simply: the new puritans need to grow up. For intellectual creativity to flourish, we must change the rules of engagement.

Share
Facebook
Twitter
WhatsApp
Email
Previous articleLeslie Loftis’s America Watch: The UN is close to signing its own death warrant
Next articleKaren Harradine: We should shut down Dfid and stop doling out money to terrorists