NewsPaperthe art of publishing
HomeNewsNiall McCrae: It is not as grim as you think in Hull
21

Niall McCrae: It is not as grim as you think in Hull 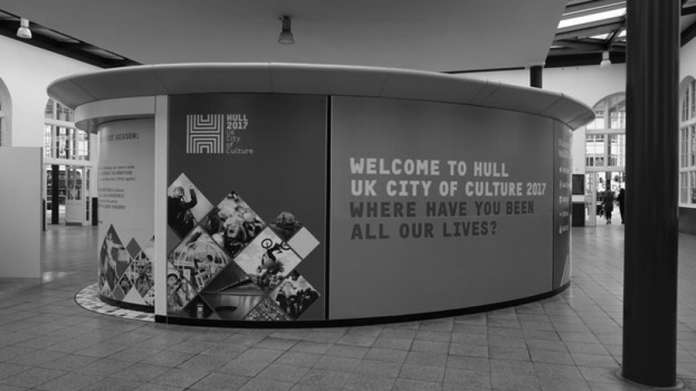 And the widening river’s slow presence,

Gathers to the surprise of a large town:

Alight at Paragon, a Victorian railway terminus, for a weekend in the City of Culture, 2017. If it’s your first time in Hull, you might initially concur with the metropolitan elite, who derided the award as a sick joke. Looking across an inner ring road to ugly blocks of budget hotels and 1960s civic carbuncles, it’s grim up north…

Half an hour later and your spirits have been raised. Sitting snugly in the comforting glow of the Black Boy tavern, warmed by real ale and live sea shanties, you have found Philip Larkin’s second home. The old town is a Mecca of traditional pubs, steeped in maritime heritage. Hull must be one of the friendliest cities in Britain – an unpretentious folk, welcoming yet irreverent, with the right priorities in life.

Saturday morning, and you will be planning a day of wholesome cultural activity. Hull presents not whimsical postmodern artifice, but immersion in the life of a great port renowned for its lyrical as well as manual industry. With the poetry of Andrew Marvell or Larkin in your coat pocket, take a walk along the Land of Green Ginger (surely the best street name in England).

Turn towards the River Hull (the city is properly known as Kingston-upon-Hull) for the Arctic Corsair, a preserved North Sea trawler. The guide, who once rode the stormy seas for piscine plunder, brings to life the ardour and danger of this work. He tells of the Cod War, when the Corsair rammed an Icelandic gunboat (my remark of ‘Excellent’ at this daring feat drew a disapproving stare from a fellow visitor, a lecturer at some former polytechnic).

The narrow, muddy Hull hardly looks navigable, but sometimes the bridge carrying the old main road is raised for shipping. In pursuit of a noted chipsmith in the east end, I once waited under a huge cloud of soot thrown from the lifted carriageway as an incongruously large freighter passed through to the Humber. Such unadulterated northern grime lurks alongside the Museum Quarter, where you can take your pick of numerous historical journeys. Don’t miss the refurbished Ferens Art Gallery, with its impressively rich collection from Enlightenment to 20th-century realism.

Spare some time for the old fruit market, now an arty enclave of antique stores, music studios and cafes. Flat whites in Hull! Stroll around the nearby marina, and while the hundreds of moored yachts seem out of context, the Humber remains a busy import and export channel. Get a window seat at the Minerva, a riverside hostelry serving good grub and East Riding bitter (don’t say ‘gastro pub’ here).  On a hopefully clear evening, marvel at the weird yellow and purple hues of sunset.

On Sunday you could visit Hill Minster, the largest parish church in England before Archbishop of York John Sentamu announced its timely elevation. Your visit is not necessarily worshipful or architectural: all kinds of events take place in this community forum, including the annual city beer festival. If you brought the children, you won’t escape a costly admission to The Deep, the spectacularly futuristic aquarium.

For the motorist there is a final, unmissable feature: the bridge to nowhere. Most of the traffic heading south takes a passing view of the awesome Humber Bridge and continues inland to the M1. In Whitsun Weddings, Larkin described ‘where sky and Lincolnshire and water meet’. And as you descend from the great height of a latter-day Brunel feat of engineering, there’s a curious sense that you are heading in the wrong direction.

Share
Facebook
Twitter
WhatsApp
Email
Previous articleLaura Perrins: The survival of the West is at stake
Next articlePatrick Benham-Crosswell: Politicians are responsible for the legal hounding of our brave soldiers