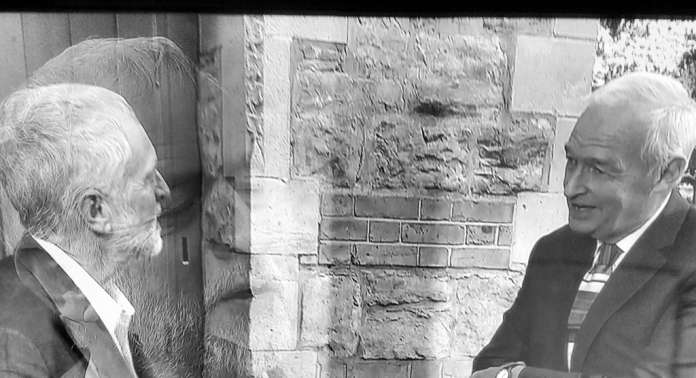 Jon Snow! What a blooming legend, eh? Smash the Tories? Not arf, mate!

Sorry if that sounds a bit trendy vicar meets Smashy and Nicey, but Jon Snow is a one man Edinburgh Cringe Festival. By all accounts, he’s an affable man and good at his job – if you accept that he’s employed as a left-wing polemicist.

Having been sacked several times myself – or “fired with enthusiasm”, as it says on my CV – I hate these calls for him to resign. Let him stay on. Just drop the pretence.

Sadly, I fear that the Guardian’s Zoe Williams has only sealed his fate by going into print and protesting too much. Her defence of Jon Snow’s balance might have worked, if she hadn’t lost her rag in the first paragraph and started dishing out the insults. Getting over-defensive only draws even more attention to his massive bias. Why try and hide it anyway?

I mean, if a man gets trollied and wanders around in public, chanting “f*** the Tories” in a field full of people with hand held, internet-connected, broadcast-quality phone cameras, I don’t think you can really claim he’s not biased. Especially as he’d been live tweeting his approval for a Jeremy Corbyn youth rally.

What’s the point of removing him? It’s better that everyone knows what Channel 4 News stands for.

How stupid must he be? And how stupid does Zoe Williams think we are, to assume we might not notice this?

If they do want to try and pass it off, surely, a better tactic would have been to claim that Snow was testing mind-altering substances for one of those hard-hitting Channel 4 live drug trials that they do in order to stay relevant. Relevant to the ratings, that is.

Snow has got form for this, so the suggestion that this was a trial would be quite believable.

What sort of trial would this be? Obviously not a real scientific study, the type you’d expect from the old Guy’s Hospital Drug Research Unit or Imperial College. In professional drug trials, humans don’t enter until Phase IV of the testing. In earlier rounds, all kinds of domesticated animals will be forced to lay down and have grisly stuff imposed on them. (Wait, wasn’t there a time when Alistair Campbell walked in and took over the Channel 4 news studio, live on air? And Jon Snow meekly crossed the floor and shook the tyrant’s hand at the end. He was did a fair imitation of a domesticated pet presenter there.)

Still, what sort of stimulant could Snow claim he was live testing? He certainly seemed to be high on a lethal cocktail of mood manipulators. There were signs of Dudgeon – a powerful narcotic which creates an unearned and unrealistic sense of self-importance and moral superiority. As a public schoolboy turned would-be street radical, Snow’s thought processes would be probably motivated by Compo, the name for the behaviour stimulated by the need to over-compensate for his obviously privileged background. You know the type of thing – pointing the finger at others and accusing them of Isms and O’Phobias, to distract people from examining your own silver spoon. Snow acts as if he’s living out one of those aspirational Buzzfeed features – Ten Diversity Friendship Boxes You Must Tick Before You’re Rumbled. Other well-known over-compensators are Owen Jones and Laurie Penny.

Where could this experiment go next?

Like all personality-led docu-drug trials, the story line would have to be all about Jon Snow. Maybe they could suspend him for a while. In the time honoured tradition of Channel 4 documentaries, the narrator would tell viewers: “But it’s about to get worse for Jon Snow. He’s just found out that evil Tories have called for his head. Now he’s only got 24 hours to prove he’s not biased.”

At the last minute, of course, Snow would be offered a lifeline. Maybe a 20-year-old who Jon Snow met at Glastonbury could be summoned to speak up in the septuagenarian’s defence. There’s always a crisis in the narrative of these ‘presenter’s journey’ style documentaries. At the last minute, there will be some good news! Jon receives a message from his bosses. It says that all presenter’s journey documentaries must always get resolved with a happy ending. So now Jon’s back on air – and he’s not the least bit defensive.

I guess we’ve all learnt something from this story, haven’t we?