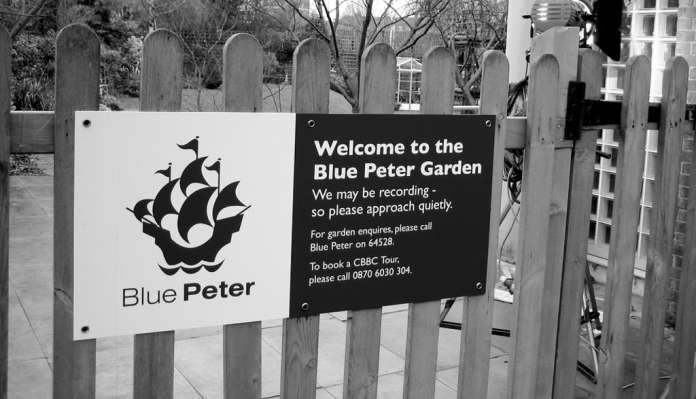 The BBC is to re-make old editions of Blue Peter, which has been deemed too right wing and middle class. The original shameful copies will be purged from its archives, as the glorious history of our state broadcaster is re-written. Here is a recent script from a pilot issue.

As the theme tune – a specially commissioned wail by Billy Bragg – fades, we hear the presenters introduce themselves.

Joan: Today on Red Peter, Val will be showing you how organise your own protest against the NHS. You might remember how, when we had The Good People running the country, we put all our hobby horses into hibernation.

Peter: It was vital that we protected them from exposure to mass outbreaks of MRSA, wide spread corruption and incompetence on a massive scale.

Val: But now The Tories [CUE MUSIC FROM BBC LIBRARY’S ‘OMINOUS PRESENCE’ COLLECTION] have seized power, it’s time to get the hobby horses –Crisis, Collapse and Backdoor Privatisation – back out the box.

Joan: In fact, we spoke to the Red Peter spin doctor, Alastair Campbell, and he positively encouraged us to give them an airing, as much as possible. So now we’ve got a wealth of activities planned. And you could feature in them. Just send in your colour photos of your protest, and we’ll see if we can include them in the Red Peter Spring annual.

Peter: In coming shows, we’ll show you how to rig footage, how to orchestrate fake news with our partners at The Guardian and The Huffington Post…

Joan: …and stay tuned for an exciting competition. We will be revealing details of our Make a Propoganda Film, so get a pen and paper because we’ll be sharing all the tricks of the trade that the BBC uses to demonise its opponents.

Peter: But first, over to Val with news of a very special announcement.

Val: Last year we funded 200 volunteers to travel to Iraq to help Phil Shiner’s Public Interest law firm to raise money for…er…well to raise money. And, they raised millions upon millions of pounds, with a massive contribution from the pockets and the families of servicemen who fought on behalf of their country…

Joan: … and we topped that up with a very generous donation from the British taxpayer.

Peter: Now, there were a few protests about this… but interestingly, there wasn’t a single protest from anyone at the BBC. Or The Guardian. Or any progressive people. So, by their silence, it’s safe to assume that the work of Phil Shiner has our official tacit approval.

Val: Well done everybody! But it’s not enough…

Joan: So this year the focus of our appeal is at home, but with an East German flavour.

Joan: We’ll be asking you to do something very important to help the struggle against fascism. Inform on your parents, if you think they may be a bit…well, old fashioned. A bit dizzy or dented.

Val: That’s why we’re calling it “Operation Dizzy-Dent.” We’re doing to round up all the dissidents who need a bit of helpful correction.

Peter: Now, this is something we don’t want your parents to help you with. But don’t worry, you won’t need any evidence. That’s the great thing about today’s political climate.

Joan: And your parents will be taken somewhere cool. Really, really cool. Chillin’, in fact.

Val: What could be more exciting? Swap out your old ‘dizzydent’ relics and win an awesome pair of foster parents. They come with up-to-the-minute state approved fashionable prejudices and they won’t even say anything embarrassing about immigration, terrorism or organised rape gangs. So, if you suspect one of your relatives of being a bit — duh, embarrassing — inform us.

Joan: It doesn’t matter if they’re a conservative, a bit Ukip or just plain Corbyn deniers – we want you to recycle them. We’ll find something corrective for them to do in one of our fabulous Labour Camps.

Peter: And next week I’ll be meeting the stars of BBC show Tracy Beaker, which is an accurate depiction of how the State can provide a much more diverse and balanced upbringing than your boring old parents.

Joan: And I’ll be climbing a wall to install some CCTV cameras in some very unusual places.