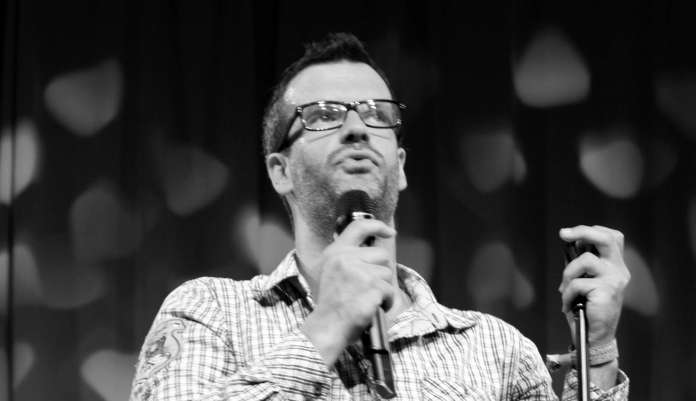 Fictional comedy writer Pete Howard had the world at his feet. With the right combination of prejudices, his non-sequitur punch lines were perfect for TV production companies. The false logic of his set ups was based on unreal assumption. But those bogus pre-judgments were a perfect match for the fashionable bigotry of the day.

Soon Howard was forging a career making attacks on easy targets. His constant attacks on Ann Widdecombe were a type of gateway thuggery which would lead to stronger forms of social violence. Soon he was launching fearless attacks on tolerant religions – and carefully avoiding the violent ones. This bogus moral grandstanding won him many plaudits from the shadowy figures who run the comedy industry known as ‘The Biggsies’. The name refers to a group who think they are left wing, but their actions – mob rule bullying, moral cowardice, narcissism and selfishness – are hideously Big C conservative, hence The Biggsies.

Biggsies have much in common with Bernard Manning: they cater to crowd pleasing through fashionable prejudices and confected moral indignation, where innocent victims are singled out for abuse and scapegoating.

With fashionable prejudices that ticked all the right boxes, Howard has a sort of Golden Ticket to the comedy industry. Howard’s obsessive hatred of certain individuals – normally something of a drawback in polite society – is a boon in the comedy industry, if targeted correctly. When Howard started to obsess about Daily Mail readers, blaming them for every iniquity in the entire planet, his swivel eyed rants actually won him admirers. These admirers were the editors and producers of the small number of companies that monopolise all comedy, on every single broadcasting outlet in Britain.

One agent sums up how nepotistic and closed the British comedy industry is. “One outbreak of food poisoning at one dinner party could destroy the entire light entertainment industry’s comedy writing pool,” he says, “every show from Newsjack to Newszoids would be left without funnies. Not that anyone would notice.”

Attacking female Tory MPs and getting rewarded for it only encouraged him. Soon Howard was attacking other easy targets, such as an Olympic swimmer and the disabled child of an unpopular glamour model. However, people gradually started to notice that he was picking on vulnerable targets. Donald Trump, a hapless US President, provided the perfect foil. Though a powerful figure, he provided a safer space for mockery than Trumpton itself. Trump is about as dangerous as Windy Miller and with worse hair.

But then, one day, the people stopped laughing at Howard. In a 20 minute set, Howard didn’t tell a single joke and just ranted and ranted about how much he hated Donald Trump, going into obsessive detail on stuff that nobody else noticed or cared about. Howard had become a Trumpophobic.

He desperately needed help. After issuing a press release and informing the media that he was checking in to The Priory, Howard began counselling. A psychiatrist gave him the bad news. he was suffering from Left Wing Narrative Syndrome, an affliction that affects the entire TV comedy industry. It won’t kill you – many comics lead perfectly successful comedy careers as functioning left wing narrative bores – but it will stop you being able to relate to the man on the 137 from Crystal Palace through Clapham.

Howard was faced with a choice. Be a regular Nobby Normal – or spend the rest of his life in the safety plastic bubble of the comedy industry. It was the easiest decision he’d ever make. Now he’s writing ‘comedy’ for The Mash Report on BBC, Newszoids, Newsjack and all the other shows that reach out to 0.3 per cent of the population. He’s even thinking of telling people how passionate he is about the NHS – he once thought about being a nurse! – and ramping up his moral grandstanding.

It all shows that anyone with a disability can turn it on its head using comedy, says Howard: “Yes, I’m a narcissist. Yes, I’m an approval junkie. Yes, I’m  Trumpophobic. And no, I’m not very creative or imaginative. Broad minded people have had it all their own way for too long. Get over it.”