NewsPaperthe art of publishing
HomeNewsNick Booth: Obviously, the Yanks were nuts to vote for independence
9

Nick Booth: Obviously, the Yanks were nuts to vote for independence 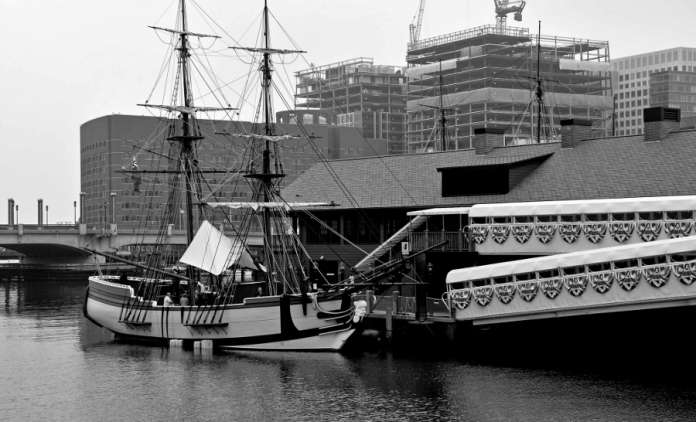 Any Americans in here tonight? How did your bid for independence go, eh?

I don’t know about you, but I hate jingoism.

My heart still sinks a bit when I see an England flag over a pub door. (Yes, yes, I know what you’re going to say.) I’m embarrassed when some bigot claims, without any apparent proof, that our hospitals are the ‘envy of the world’. Our
entire comedy industry has been ruined because all the clubs are run by microphone-wielding morons who gang up on innocent visitors to our country with the words “are there any Americans in here tonight?”.

These depressing narrow-minded idiots are a throwback to the days of empire. Like the comics urging the audience to sneer at the lone American, they desperately want to be part of a big group, the safety in numbers meaning they
can get lairy with any individuals.

That awful depressing vindictiveness is what put me off Labour in the first place. That hatred of independent spirits and love of collectivism is exemplified in their resentment of the Yanks.

I have to say I admire the Yanks. They kicked our arses. But we deserved it at the time. Consider the choice they had to make and ask if we would be as brave. Their land was part of a large empire that represented a huge proportion of the world’s wealth. There were laws being made elsewhere by an executive they couldn’t elect. They were forced to send a cripplingly large amount of money each week to that organisation, for no apparent representation. They were ruled by a distant monarch (mad King George) who acted as if he was Junckered out of his mind most of the time.

OK, there were benefits for the Americans in a secure trading bloc and the security of the world’s most powerful army and a navy that ruled the sea. Surely they were stronger in.

But did they Remain? No, those crazy Yanks chucked it all in for a step into the complete unknown. They chucked tea in the harbour, severed links with their overlords and even declared war on them.

All because they wanted sovereignty (chortle!) and to make their own decisions (racists!) and planned to make their own deals when trading with the world. But….but… all their trade was linked to Britain or its empire. Their neighbours to the north were British too! The ridiculous little Bostoners!

The British Empire had all the trading links the Americans could wish for, as the powder-wigged Nick Cleggs of the day would have told them rather patronisingly. Empire will guarantee our national security, the Cleggites of the day
argued.

Thomas Paine, one of the architects of the revolution, was by all accounts a quirky character with terrible personal hygiene. And what a hypocrite, he was British. I bet our hilarious stand-up comedians would have a field day with
that, telling the same joke over and over again in order to help them overlook the bigger picture.

Never mind the big issues, Thomas Paine smells!! And he probably reads the Daily Mail! Do we really want a world based on Thomas Paine’s BO?

I wonder how it worked out for those rebels. Did they sink without trace?

Are there any Americans on this website? Can you tell us how you got on?