NewsPaperthe art of publishing
HomeNewsNick Booth: Robin Hood in reverse. How the BBC robs the poor...
25

Nick Booth: Robin Hood in reverse. How the BBC robs the poor and gives to multi-millionaire presenters 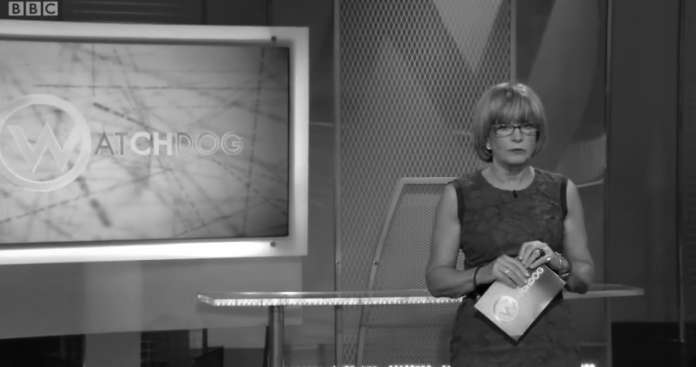 Hello and welcome to WatchBlog, the first in an occasional series of investigations into where your money goes.

Today we’ll be looking into a ‘uniquely funded’ broadcaster, which takes money off poor people and gives it to millionaires. To add insult to injury, we’ve found the programmes they actually deliver are pitiful imitations of the quality you expect.

We’ve got a couple of new faces for the Posers Gallery – Ann and Matt. Seedy looking pair, aren’t they? We’ll have more from them, later, if they ever answer the emails, web forms and written complaints we’ve sent. But from what we’ve seen of this lot, don’t hold your breath.

Ann Robinson and Matt Allwright, to give them their full names, both work for an organization called The British Broadcasting Company. Sounds impressive doesn’t it? But if we dig a little deeper, we find that this BBC mob has a very unusual way of raising revenue, which involves taking money off the poorest in society and giving it to multi-millionaires. Including Ann herself!

Young single mum Sophie, 25, paid £145.50 after a couple of men in a white van turned up on her doorstep. They told her that if she didn’t pay up, she could be ‘put away’ and fined a thousand pounds. “They told me they know where I live and they had detector machine that could see inside my house and tell them exactly what I was doing,” said Sophie.

It’s a scheme called, rather ominously, ‘the licence fee’ and it’s been used to extort money from every household in the country. If you’re a single mother, or wheelchair bound and your disability benefit has been suspended pending an investigation, or a hard working refugee struggling to feed your family on a zero hours contract, a hundred and forty five pounds is a lot of money to find. In fact, we found TV footage of a BBC programme making this very point. “Some people have to make the choice between heating or eating,” said a well nourished BBC Newsnight pundit.

But the licence fee collectors don’t care, they just want their money.

In its defence, the BBC has claimed that this licence fee is protection against all kinds of things that could happen. If you don’t pay the BBC’s collectors their licence money, you could fail to be enlightened – and you wouldn’t want that to happen, would you? The BBC website also promises you ‘an education’ and promises to ‘keep you informed’.

When we tried to investigate the source of these promises we were told, mysteriously, “Lord Reith doesn’t live here any more.”

So we decided to do some investigation of our own. This is where Ann and Matt come in. Remember them from the start of the programme? The wind tunnel-faced bird and the middle-aged man in the leather jacket. It turns out they both used to be brilliant journalists – once.

“I bought a TV licence for a number of reasons. I don’t look good in prison fatigues, for one. But a major motivation is that the BBC has a brilliant reputation for journalism,” Barry told us. But if he was expecting Alan Whicker, he was to be disappointed. As they say on the new reality TV style BBC documentaries, it’s about to get worse for Barry Simkins.

“I sat down last night expecting to see investigative journalism at its finest. When I saw the name Matt Allwright in the credits, I was so happy,” said Barry.

But Barry was in for a terrible disappointment. Having promised so much, Barry’s screen idol hero Matt Allwright didn’t turn up. Instead, he seems to have been replaced with a desperate wannabe stand up comedian.

“It was as if a producer had pureed Mark Thomas and Michael Moore, poured the blend into motor bike leathers, and someone had forgotten to say Stop,” said Barry.

This fiend in human form soon resorted to modern, advert-driven TV techniques, which cater for the dimmest, attention-deficient viewers.  This involves constantly breaking off from a story and jumping to something else. It’s a trick that commercial TV stations use, because they don’t want viewers switching channels during the advertising breaks. This infuriated Barry, because he’s not stupid (as the show’s makers obviously assumed). Barry isn’t the only person to be insulted by this TV travesty.

“The whole point of buying a BBC licence is to avoid ad breaks and jump cuts,” said Barry.

We asked a Reithian broadcasting analyst to watch this ‘Watchdog’ programme. It was an ordeal that would make a Presbyterian Minister kick in a stained glass window. He counted 14 uses of the phrase, “More of that story later”. Many minutes were wasted on endless painful repairs of narrative threads that had been broken earlier.

“None of this was necessary because the BBC doesn’t show adverts,” said the analyst, “and besides, with digital TV editing, they could make two versions of the programme, one of which caters for people who don’t have the attention span of a gnat.”

Later, we were to discover that the makers of Watchdog had blown 90 per cent of their entire budget on the permanently surprised looking host, Ann Robinson. If they hadn’t, they could have hired 90 extra researchers, cameramen and editors, who could have used the footage to make ten different versions of the programme, each catering for a different target audience.

But it seems Matt, Ann and the gang had other ideas about how to spend the money. Money, let’s not forget, that BBC licensees had invested in the programme, rather than being able to feed their children (a financial decision that is forced on the poor, as unbiased BBC documentary makers themselves have frequently pointed out).

Matt blew a huge amount hiring celebrity Dominick Littlewood for a two minute appearance in one show. Unless they share the same agent, we could find no reason at all why this man was appearing on the show for a buttock clenchingly awful ‘comedy routine’. To add insult to injury, Matt and Dom then made a mockery of the tragic stories of wronged consumers, which they seemed to be making into light entertainment.

In the previous week’s ‘consumer championing’, Matt introduced a man in a beard and a cocktail dress who once appeared in Eurovision. We wrote to Watchdog to ask how much this stunt cost, and whether it was good value for money. They haven’t answered us yet.

“I am bitterly disappointed,” said Barry, “I paid to watch villains getting turned over by nameless journalists. Not licence fee payers getting robbed by multi millionaire star presenters.”

So far, the makers of BBC Watchdog have failed to respond to our written, emailed and web submitted queries. We will keep you posted.

Next Week on Watchblog we ask: Why is Owen Jones on BBC News so often? Wouldn’t it be cheaper and more fitting to give him a full time job and get him on PAYE like a genuine worker?