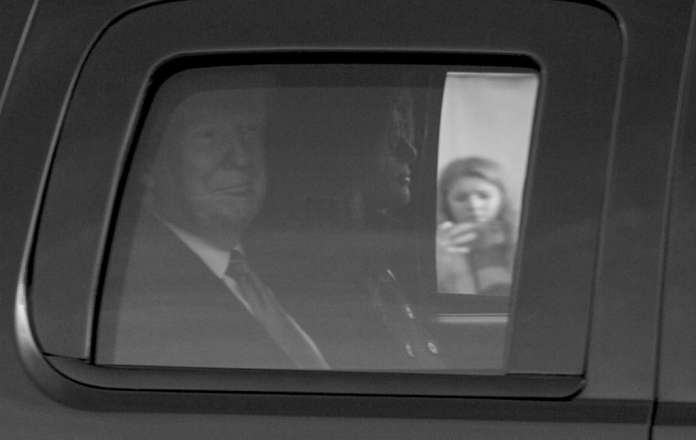 The economy is booming, employment is up and people seem happier.

But BBC man Martin Batch spots something terribly wrong with this post-Trump picture.

These outbreaks of peace and goodwill are nothing to do with him.

What if history judged Trump as a successful president? It would be Ronald Reagan all over again.

That is the premise of a new ‘histopian nightmare’ movie starring Benedict Cumberbatch. Only The Batch can stop the world sleep walking into The Wrong Kind of Happiness.

As a character in the film says: “If Trump makes people happy, this shit could go global.”

By comparison Despite Brexit would be a small island getting democracy back!

In the ‘future disaster’ movie, Cumberbatch’s character despairs as people around him seem increasingly out of control. The usual social cattle prods, like Hitler comparisons, race baiting and Empire shaming, are no longer effective. They seem to just bounce off the lower orders.

As Scotty, his faithful social engineer (played by Martin Freeman) says: “It’s no longer working captain. It’s as if the herd has become immuuuune!”

In despair, The Batch goes for a long walk. Just as he’s about to give up, go back to society and join in with the community spirit, a little mockney voice speaks to him. “Sneer up mister, there’s still some despair in the world,” says a bearded man living under a bridge. It’s a cameo Jeremy Corbyn!

I won’t give the whole plot away, but suffice it to say The Batch finds kindred souls who haven’t given up hope of omnipotent centralised control over every thought process and emotion of humanity. The micro management technology is out there. But, to paraphrase Marx, they just need to get their hands on the means of reduction.

Jeremy introduces The Batch to his pals. There are still good people projecting fear, but all the gloom mongers, populo-phobes and anti-Semites have self kettled themselves into a tiny, remote area called The Labour Party. It’s a safe space, for now, as nobody gives a toss about them.

But there are pockets of dissent all over Britain. The BBC is a sleeping giant, nobody seems to have noticed that Channel 4 News is still going, and there are elite troupers diverting fortunes from the nation’s charities into Project Fear II.

The muddle classes can rise again!

The role has special significance to Cumberbatch, who tells publicists how his own descendants had a horrid reception, when they first came to Hastings, in 1066. As a consequence of this inheritance, he brings a sense of righteous indignation to the role.

Before the final battle, The Batch channels his inner William Wallace as he daubs himself in paint and fires the luvvie troops with a rousing speech.

The made-for-TV histopian nightmare may not actually be made. But there will variations on this, with titles like Why Freedom and Trumped, on all Remoanstream Media, for the next five years. See your local TV screen for details.