NewsPaperthe art of publishing
HomeNewsNick Booth: The Nativity goes viral. Joseph was let down by last...
1 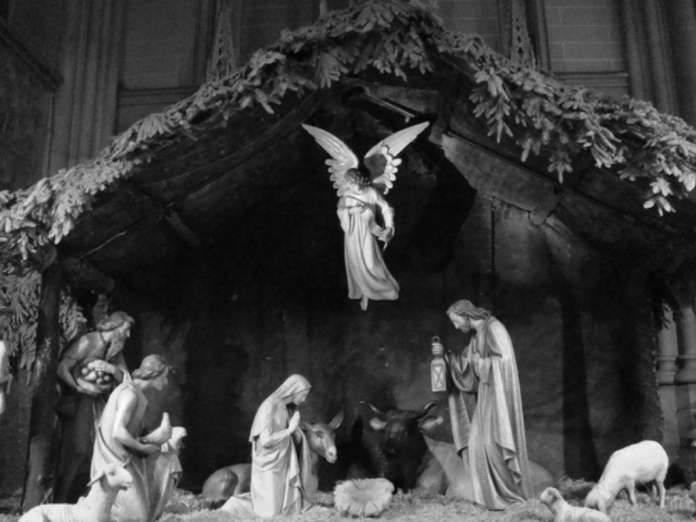 What really happened in the Nativity? Like many who spend all their waking hours staring at a glowing screen, I don’t have the patience to read a book any more. I prefer the instant gratification of the internet, which is always accurate. So here’s some search engine sagacity on the meaning of Christmas.

According to the canonical content published by Luke and Matthew, Jesus was born in Bethlehem in Judea, to a virgin mother.

In the Gospel according to Luke, Joseph and Mary travel from Nazareth to Bethlehem for a census. They were told that they ‘could’ win a tablet for taking part in this survey. But it’s much more likely that, having surrendered all their personal details, they would be bombarded by junk mail (or to use the biblical vernacular “a plague of flies, boils and darkness”.) While in Bethlehem, Jesus is born there and laid in a manger.

Joseph had been offered a fantastic last minute hotel room on his tablet, on a special site that caters for newborn kings, HeirBnB. But later, in feedback, he would describe the so called ‘luxury’ apartment as ‘more like a stable’. But he withdrew this critique, after Mary pointed out that the stable owner would ruin Joseph’s online reputation in return.

He kept schtum and luckily Jesus was so cute the Angels proclaimed him a saviour for all people – without ever even meeting him. By all accounts Jesus went viral and shepherds came to adore him.

In other accounts, Three Kings were following the whole event on Twitter and ordered gifts ideal for a New Born King. The Frankinsense was delivered to the wrong address. Gold wasn’t available, so the gift pickers substituted it for a carton of Sunny Delight. The Myrhh at least turned up, but there was a postage surcharge.

In Matthew’s account, astronomers follow a star to Bethlehem to bring gifts to Jesus, born the King of the Jews.

Like many an insecure social justice warrior, King Herod feels threatened by this and quickly opens a can of hash tag, ordering the massacre of all the boys less than two years old in Bethlehem. But, as with many early attempts at raising an online torch bearing mob, the title #Death2NewBornKings, failed in its objective. Most of Herod’s followers had been bought anyway, according to search engine scholars. He did manage to get Joseph’s employers to force him to resign however.

The way the content according to Matthew tells the stories, the family flees to Egypt and later settles in Nazareth.

Modern scholars have poured scorn on both publishing houses for these nonsensical narratives. “Wow. Check this historical disconnect,” tweeted someone claiming to be E. P. Sanders. While on Facebook GezaVermes99 earned 97 likes for a thousand word essay pointing out the contradictions ending, in the time honoured fashioned of lengthy personal diatribes, with the words “end of lecture.” On Instagram Marcus Borg historian posted a picture of a donkey that was supposed to have carried Joseph, Mary and their luggage, with the simple title “LOL”.

Wikipedia tells us that biblical scholar Mark D. Roberts has tried to harmonise accounts of the birth of Jesus and reconcile the contradictions. The Bible is full of contradictions, a fact that internet scholars and instant judgementalists never tire of pointing out. Moses may have been able to carry two tablets of stone with Ten Commandments, but he’d never have managed the other 30 tablets outlining all the terms and conditions.

The historical accuracy of the Nativity is less important than the spirit of the event. We are supposed to view this time of year as a time of spiritual cleansing, recollection and renewal.

And we haven’t lost that have we? I must go now, there’s a sale on at John Lewis.