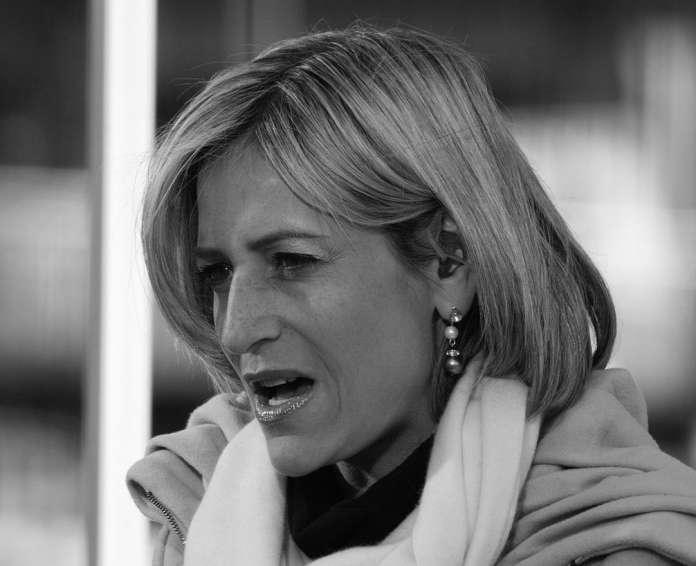 This summer could see the most frenetic trading ever in the news reading game, as the close season transfer market reaches fever pitch.

Two controversial rulings, by the games ruling body Auntie, have made this summer’s bidding war more intensive than ever. The first, the Gender Gap Expose, rocked the sport of autocue reading to its foundations, when it revealed that many men were on obscene amounts of money. The second initiative, the Two Wrongs Make a Right law, will see their female rivals demand the right to be equally overpaid with matching obscenity. The news reading game is ready for a torrent of employment litigation.

“First we had a genderquake, now we’ve got a Sue-nami,” said one insider.

Sources say top newscaster Emily Maitlis is to slam in a transfer request and seek showdown talks with the managers. Now Maitlis’s teammates – including the game’s top players such as dependable stopper Laura Kuenssberg and schemer Jane Garvey – are involved in a furious bust up over wage demands. Some say they could defect to Russia Today in a player-plus-cash deal. Midfield enforcer Jenni Murray has issued a “come and get me” call to Sky TV.

Maitlis, the normally ice cool blonde, is said to have flipped after hearing news room gossip about rivals in the other changing room. When Maitlis heard that one middling autocue reader at her club is trousering four times her wages she organised a dressing room revolt.

Maitlis leads the line on her news team, occupying the difficult position just in front of the camera. Having started her autocue reading career in the lower league with Thames News she soon impressed bosses with her quick wit. Male fans of Maitlis soon devised their own chant for her. “She’s clever! She’s hot! She’s everything Huw’s not, Emmer-lee, Emmer-lee!”

Meanwhile, many newsmen were seen running for cover and Jeremy Vine is said to have begged bosses to be transferred to a war zone.

However, some say this could be the last hurrah of a dying industry. Greed has destroyed the game. The torrent of TV money from loyal fans – who would pay their license fee through thick and thin – cannot last for ever. Some modernists say that the practice of taking money off the poor and giving to the rich is an anomaly now the feudal system is no longer in play.

“These insatiable demands for more are killing the club,” said one BBC fan, “the days of champagne and bunga bunga are over.”