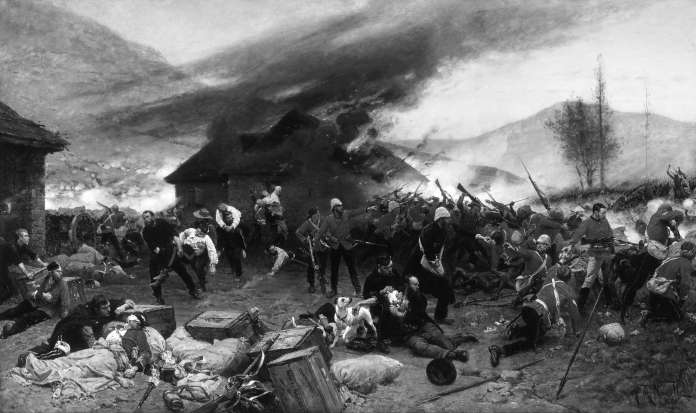 So will it be another Rorke’s Drift? A heroic last stand in which a tiny band of brave men see off a far larger force of attackers and turn the tide in the war?

That is what David Cameron is praying for when the Rochester and Strood by-election is fought in a few weeks time.

But first is the warm up act, the Clacton by-election on Thursday where Tory defector Douglas Carswell appears assured of becoming Ukip’s first directly elected MP.

In the impenetrable reasoning of Westminster, Cameron and his inner circle have apparently written off Clacton (Tory majority in 2010 of about 12,000), principally because Carswell has such a strong local following. The Tory high command appears to be just going through the motions to defend the seat against the Ukip insurgency.

But Rochester (Tory majority 10,000)  is different. Cameron has raised the stakes spectacularly publicly and privately by insisting that he will personally lead the charge against “fat arse” Mark Reckless who has followed his friend Carswell and switched to Ukip.  No date has been set for this by election but is cannot be far away.

As students of our colonial wars will know, Rorke’s Drift, immortalised in the film Zulu starring Michael Caine, proved the decisive battle in the Anglo-Zulu war. A force of about 150 British troops repulsed a Zulu impi of 3,000-4,000 men and suffered only 17 fatalities. Eleven Victoria Crosses were  subsequently awarded to the defenders.

But only the day before the British army had been routed by the Zulus at the Battle of Isandlwana. The stage is set. Clacton as the latter-day Isandlwana; Rochester as the Tories’ Rorke’s Drift where the Faragist insurgents are put to flight.

Some might doubt the wisdom of Cameron’s tactics. The opinion polls have all pointed to a Ukip win in Clacton, but the smoke signals from Rochester have been mixed. The first survey suggested that the Conservatives were on course to hold the seat, where by common consent Reckless commands nothing like Carswell’s local following. But last weekend’s poll must have set the alarm bells ringing in Conservative Campaign HQ. This gave the much mocked and derided Reckless a nine-point lead over the Tories.

Cameron left his party conference in Birmingham last week in far better shape than when he arrived.  His markedly Tory rhetoric and policy pledges, not least over cutting taxes, curbing welfare and controlling immigration, combined to give him a bounce in the national opinion polls, putting him ahead of Labour for the first time in more than two years.

His clever jibe warning the public that they might go to bed with Nigel Farage but wake up with Ed Miliband neatly encapsulated the perils of flirting with Ukip and so boosting Labour’s chances. Equally effective was his concentration on the forced choice to be made in the general election in May: ultimately, it is either David Cameron in Ed Miliband in Downing Street.

But a speech, however good, is just a speech. Now we are back to the realities of votes and power.

After the Ukip triumph in the European elections in May, Cameron was in deep trouble but then managed to stop the rot by beating off Farage in the Newark by election a couple of weeks later.

Can he repeat the trick? If not, the pressure on him from Tory Mps further to toughen his European policies (especially on immigration) will grow. And calls for some kind of pact with Ukip will become louder still.