NewsPaperthe art of publishing
HomeNewsNick Wood: Clegg should do us all a favour and quit now
3

Nick Wood: Clegg should do us all a favour and quit now 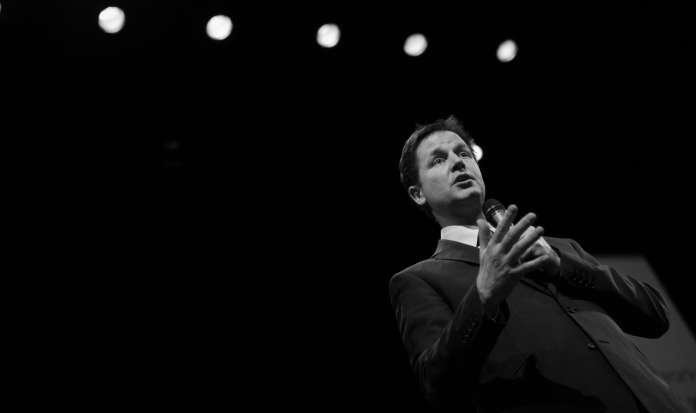 The great merit of democracy is that eventually the public gets the chance to kick the rascals out. No backside is in greater risk of a hiding than that of Lib Dem leader Nick Clegg.

You might have thought that with his party neck and neck with the Greens on 7 per cent in the opinion polls, the media might have drawn a discreet veil over the Lib Dems’ death throes in Glasgow this week. The kindest thing would have been for the reporters and cameramen to put down their pencils and replace their lens caps.

But no. The sheer horror of the Lib Dem conference has been carried wall to wall, in the press, which can choose to write about anything it likes, just as much as on the airwaves, where there is mysterious duty to report what these nobodies have to say about such burning topics as windmill expansion or reforming the planning system.

I say nobodies advisedly. The Daily Mail has taken to dubbing Clegg Mr Six Per cent in recognition of his party’s vanishing poll rating. Meanwhile, pollsters ICM gave the hapless Lib Dem leader an approval rating of minus 42, his lowest ever compared to Cameron’s minus 7 and Miliband’s minus 35, utterly dreadful but not his worst.

Philip Johnston in yesterday’s Daily Telegraph hammered home a few more coffin nails. In a week where attention soon switches to the two by-elections tomorrow, it is worth recalling that the Lib Dems, once the masters of the by-election upset, have failed to win more than 5 per cent of the vote (and thereby lost their £500 deposits) in the nine such contests held since 2010.

It is not so much what Clegg says as the fact that he goes on and on saying it, boring his interviewers and listeners into the dust with torrents of platitudes, evasions and banalities, all delivered with a wheedling self-righteousness that must have the whole nation reaching for the off button. And that’s not just a shot in the dark. A poll out yesterday reported that more than half the public think the Lib Dems are irrelevant.

As indeed they are. And voting for them, which almost no one now contemplates, is pointless.

The experts burble back by sternly reminding us that despite the fact that the Deputy Prime Minister’s outfit barely registers on the national radar screen, it still has 56 Mps and that at least half of them can expect to survive their party’s coming drubbing in the general election. This is because they work extremely hard (at clearing drains, getting cats out of trees and helping old ladies cross the road) and are well dug in in their local redoubts, like badgers determined to avoid the cull.

Perhaps. And perhaps they will be all slung out next May, including Clegg in Sheffield Hallam, where he is especially reviled for blatantly breaking his promise over student tuition fees.

At the current rate of progress, the Lib Dem poll score will be in negative territory by the election. Can any party actually win seats with this level of support?

But before deliverance day, we will have to endure Clegg’s last party conference speech. We know what he is going to say, because he has been earnestly, insistently and boringly spewing it out all week. Vote for me because I am not Labour and I am not Conservative (and certainly not Ukip). I will be a restraining influence on that mad Lefty Miliband and that mad Righty Cameron. (He has not so far pledged to keep the nation’s favourite pub regular Farage in check – too much even for Clegg the miracle worker).

It is arrant nonsense, even if you believe that Miliband would blow up the economy again or that Cameron secretly lusts after demolishing every school and hospital in the land. The idea that Clegg and his dwindling band of ageing, bearded followers could keep a class of five-year-olds in line is laughable.

And it will be his last conference speech. Hardly anyone in Britain cares what he says or is even listening.

If he has any sense, he will quit now and let someone else try to construct some semblance of a political party out of the pile of self-serving, sanctimonious rubble he leaves behind.