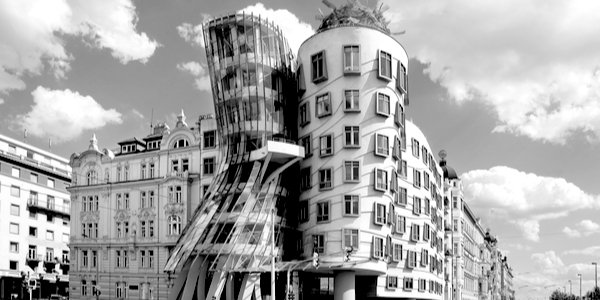 MODERN cubic architecture came as a shock to traditionalists. Could it get any worse? Oh yes it could, and it did. Much, much, worse. The rectangles and verticals of Mies van de Rohe and those who followed him are positively elegant and harmonious when compared with the disturbingly ugly, infantile, absurdist psychedelic playroom confections of Frank Gehry and his disciples. These are ludicrously expensive architectural jokes which display a psychopathic disregard for the mental health of all who are forced to look upon them.

In some ways Gehry’s work – and perhaps more to the point the reputation it enjoys among the cognoscenti – is the canary in the coal mine. Wanting to surround us with buildings styled in such a ridiculously anarchic and absurdist fashion reflects the self-hating nihilistic state of western culture. But exhibiting absurdist art within the confines of an art gallery is one thing. That’s a relatively private indulgence. But a huge, grotesque building which dominates the skyline is quite another.

With great buildings like the Royal Albert Hall, it’s clear that 150 years ago architects were designing buildings to create an inheritance for the benefit of future generations. Gehry’s work is architecture for a culture that sees no future. It presents a highly-stylised and pretentious visual theme of collapse and dilapidation, narcissistically trying to ape the thrown-together style of the favellas which spring up around cities like Rio de Janeiro. Those improvised homes are of necessity made in an ad hoc manner, from whatever cheap materials that can be acquired or found. The reality of Gehry’s structures is the very opposite. These are vanity projects that cost a fortune, much like multi-millionaire pop stars wearing designer-torn jeans that cost a thousand pounds a pair. This is the style which comes from a society which has given up all hope for the future, abandoned all sense of patrimony and is determined to just blow it all on one last orgy of anarchic fun, before the real collapse sweeps in, destroying all before it.

These ridiculous structures have even managed to make once-reviled buildings in London look almost beautiful in comparison. On my last trip to the capital a couple of years ago, looking east along Oxford Street, I caught sight of Centre Point. Straight and tall, its brutal concrete exterior gilded by the low sunshine of a February afternoon, it seemed quite beautiful compared with the forty-year plague of architectural jokes whose frivolous, gimmicky shapes have done so much to make the contemporary London skyline look as if it were thrown together in Lego by children.