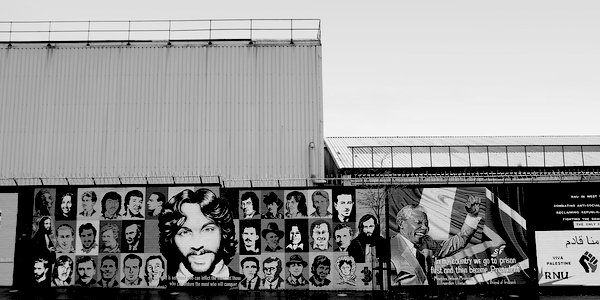 EU bosses in Brussels may soon have blood on their hands. Their decision to play the Irish border card in the current Brexit negotiations is incendiary and reckless, to say the least.

Walking the nationalist Falls and the loyalist Shankill roads in Belfast a few days ago, I was struck by how little even mainland Brits know of their fellow citizens across the water. The European Commission, it seems, knows even less. For Michel Barnier and his Brexit negotiating team, the Northern Ireland issue is little more than a stick with which to beat the Brits and to ensure that we are properly punished for voting to exit the EU. This is playing with fire.

Significantly, Barnier has chosen to ignore Northern Ireland’s internal ‘hard’ borders. Euphemistically, these are known as ‘peace walls’. They stretch for around 22 miles, mostly, but not exclusively, in Belfast.

The first were constructed at the start of the most recent ‘troubles’ in 1969. By the late 1990s there were a couple of dozen and now this has more than doubled to around 60. Up to 33ft high in parts, they separate ‘nationalist’ and ‘loyalist’ areas.

Rather like the Berlin Wall, our own UK walls attract tourists and ‘celeb’ peacemakers. Easily forgotten is the alarming truth of what lies behind the murals and the graffiti. The walls were built to stop people from attacking each other, from burning down their neighbours’ houses, from dispensing punishment beatings and from committing tribal murder.

These internal borders need to be part of the Brexit talks because, like it or not, they too are part of the Northern Irish package.

For visitors the Northern Irish are probably the warmest and most welcoming people in Europe, let alone the UK. One reason for this, I suspect, is awareness that the province remains a tinderbox. Central Belfast has a regenerated waterfront and a superb ‘Titanic Experience’ – voted the world’s leading tourist attraction in 2016.

Behind the hospitality of the people and the wonders of the Game of Thrones film set, however, lies a region whose stability remains fragile.

Paramilitary groups have told us that the ‘armed struggle’ is over. As much was said by IRA leader and subsequently first minister, Michael Collins, following the Irish War of Independence from 1919 to 1921. He received a bullet in the head for his pains in signing a peace settlement with the UK government. The Irish civil war turned out to be even bloodier than the Anglo-Irish war that preceded it.

The Good Friday power-sharing agreement of 1998 is to be applauded for what it has achieved over the past 20 years. Nothing, though, should be taken for granted in today’s Northern Ireland, as the internal ‘peace walls’ testify.

I wonder if Monsieur Barnier and his team are aware of what happens in Belfast when night falls? The access gates between nationalist and loyalist areas are closed to protect the inhabitants from, at best, recreational rioting and at worst bloodshed and murder. Northern Irish politicians like to talk about a ten-year plan to dismantle the walls but on the front line the locals know better.

Taking down the walls is ‘probably the stupidest suggestion I’ve ever heard’, one resident told ABC News in 2013. Another added: ‘If you take the walls down, eventually someone’s going to end up shooting at each other.’ One young man warned that there would be civil war and dismissed the politicians as ‘out of touch’.

From my own conversations with people on the ground, things are no different today. If anything, tensions are growing. ‘Willie Frazer have you found your daddy yet?’ was a mocking sign adorning the top of a bonfire at the time of writing this blog. Willie Frazer’s father was murdered in an IRA attack in 1975.

A few days ago it was loyalist paramilitaries making the news for ‘cleansing’ of a Catholic family from a Protestant area of Belfast.

Northern Ireland’s priority is peace and it should be the EU’s priority, too. If forcing the UK’s hand over the border with the Republic re-ignites violence, the price of EU intransigence might be bloody indeed. After the fiasco of its interference in the former Yugoslavia, one might have hoped that Brussels had learnt a lesson.

Share
Facebook
Twitter
WhatsApp
Email
Previous articleSaturday essay: How to resist the Remainers (in a strictly non-violent way)
Next articleTime to ban the burka? You say YES