NewsPaperthe art of publishing
HomeNewsNow will energy firms tell the truth on subsidies?
0

Now will energy firms tell the truth on subsidies?

This article was first published in a longer version by the Global Warming Policy Forum and is republished by kind permission. The full article can be found here.

Britain’s electricity suppliers are reported to be considering further increases in prices to consumers. Climate policies are largely responsible for such price increases, yet government is more than content to let private energy companies and their shareholders take the blame. Intoxicated with subsidies, the electricity sector has hitherto colluded in this obfuscation of causes, but the introduction of the domestic electricity price cap may change this situation, encouraging energy suppliers and indeed all businesses to name government as the guilty party.

History provides very few clear lessons, but the records are tolerably clear that revenue collectors and tax farmers are always and everywhere loathed without reservation. This may be unfair, but it is a fact, a human universal. Why then did Britain’s energy supply companies willingly accept the task of raising the necessary subsidies for renewable energy directly from their customers’ bills? This in effect made these private companies covert revenue agents for the state, and so allowed government to hide the costs of energy and climate policies.

Anyone familiar with the industry will know there is no doubt that energy and climate policies are and have been for some time to blame for rising electricity prices, but the point bears repeating. The following chart, drawn from data in the government’s regrettably discontinued Estimated Impacts of Energy and Climate Change Policies on Energy Prices and Bills (2014), shows the components of electricity prices to domestic consumers in 2014, and the projected change in those components in 2020 and 2030 in the Central Fossil Fuel Price scenario. Energy and climate policy impacts are indicated by the green section of the stacked bar. 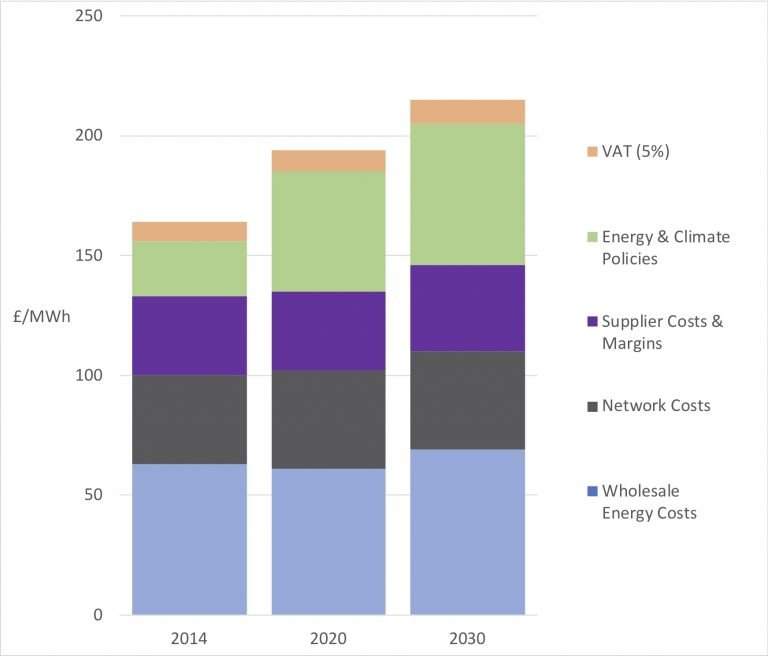 It is obvious that energy and climate policies already accounted for a large fraction of the price in 2014, prices being 17 per cent higher than they would have been in the absence of policies. By 2020 policies were predicted to make prices 37 per cent higher, and 41 per cent higher in 2030. In fact, DECC’s method of presentation somewhat understates the impact since a significant part of the Network Costs are actually due to renewables, because of system balancing actions and grid expansion, and a slice of the VAT element also, of course, results from the policy costs. This is, then, a conservative presentation. Furthermore, the Central Fossil Fuel Price scenario is not necessarily the most probable. In the Low Fossil Price scenario, which appears to be materialising at present and may very well apply in 2030, energy and climate policies cause prices to be 42 per cent higher in 2020 and 62 per cent higher in 2030.

But even in this understated, conservative central scenario, where fossil fuel energy costs are actually expected to rise, policies are the dominant causal factor in the overall price increase up to 2030. Put more precisely, in the absence of policies, electricity prices would have been stable to 2020, rising from about 14p/kWh (£140/MWh) in 2014 to about 14.1p/kWh (£141/MWh). In actual fact prices stood at 16.4p/kWh in 2014 because of policies, and were expected to rise to about 19.4p/kWh (£194/MWh) in 2020. We appear to be on track.

While uncontroversial amongst specialists, these facts are sometimes obfuscated even by authoritative sources, such as the Committee on Climate Change (see for example, the Energy Prices and Bills Report 2017), and it has been a brave energy company that takes the risk of candour about the in-effect-tax component, as for example Ovo energy was last year (see this blog’s discussion: ‘Policies are to Blame for Rising UK Electricity Prices’). Unfortunately, though perfectly correct, they have not been widely believed.

This is ideal for government, and is proving disastrous for electricity suppliers. Indeed, a very large part of the public perception that energy companies are greedy and ruthless results from the industry’s short-sighted decision to allow itself to be used as the cat’s-paw of climate policy.

The hazards of this must have been obvious to the main board directors concerned, but the temptation to collude was certainly extreme. The express-service renewables target timetable required subsidies so large that the increased turnover and de-risked profit made the danger of bad public relations seem tolerable. The industry may well come to regret this lack of caution. A market sector debauched by subsidies, and already held in contempt by the public, will be in a very weak position to resist nationalisation by a radical socialist government.

However, government may have unwittingly forestalled this outcome, by introducing the domestic electricity price cap, a decision that could force an otherwise anaesthetised and lethargic industry into action. The uncertain, medium-term risks of a toxic public image and possible nationalisation may be pushed to one side by preoccupied executives, but an immediate crisis in revenue has to be addressed without delay. And the price cap genuinely does present a problem to the electricity supply industry. Having accepted the task of delivering the renewables policies, the industry is now being inhibited from passing the consequent additional costs on to domestic consumers via rising prices. The sums are not small. The Office for Budget Responsibility estimates that the renewables subsidy costs already amount to about £8.6billion per year in 2018/19 and will rise to about £11billion a year by the end of the current price cap period in 2023.

Such steadily increasing policy costs can be recovered only from consumers, and it is therefore probable that, blocked in one direction, suppliers will and must start to increase prices where the cap does not apply, for example prices charged to households choosing fixed-term deals, and, much more probably, prices to industrial and commercial consumers.

Since those business consumers will necessarily pass their additional electricity costs on to households in the cost of goods and services, and also in downward pressure on wages and rates of employment, it is debatable whether there will be any net benefit at all from the domestic price cap. What was an electricity cost issue will become another aspect of the general cost of living problem. Indeed, since it is likely that commercial consumers will prefer to pass costs on via those of their products where demand is most inelastic, it is likely that those whom the energy bill price cap sets out to benefit will be worst affected. Basic goods and services, naturally enough, make up a large fraction of the expenditure of a low-income household.

None of this is surprising. The price cap was reluctantly introduced by a weak government and against firm advice from economists, so regressive misfires can hardly be called ‘unforeseen consequences’. It was obvious that the price cap would ultimately be bad for consumers in very many ways. However, there is a silver lining to this debacle in that energy companies may now be encouraged to speak out with vigour about the extent to which state policy rather than market fundamentals is responsible for consumer pain.

With still larger policy driven price increases in prospect, energy suppliers have been scrambling to raise their tariffs before the price cap came into effect on January 1, and the blame game is already starting. Will the energy companies allow government to get away with this again? Since the price cap clearly shows that they cannot trust their partner in crime, perhaps they will now turn Queen’s evidence and speak up on behalf of the public. If they do so they might find themselves in good company. Industrial and commercial consumers also have an interest in ensuring absolute transparency about energy policy costs. While energy is typically under 10 per cent of the total annual costs of a business, the predicted increase in electricity prices is large even without the burden shifting probable as the result of the price cap, and such price increases will bite deeply into already very thin profit margins. Estimated Impacts reported that even in the conservative Central Fossil Fuel Price scenario businesses would see electricity prices rise by 50–60 per cent in 2020 because of policies, while in the Low Fossil Fuel scenario prices are predicted to rise by between 60 per cent and 114 per cent. These striking increases will inevitably be passed through in the costs of goods and services. Unless they are told otherwise, consumers will regard this as yet more evidence of Rip-Off Britain. Private businesses have every reason to make sure this does not happen.