NewsPaperthe art of publishing
HomeNewsOf all places: The unvaxxed are banned from Anne Frank’s house
338

Of all places: The unvaxxed are banned from Anne Frank’s house 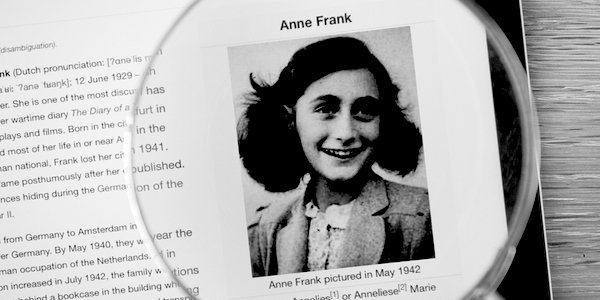 THERE are many things which have angered me since our slide into tyranny began. Physical, emotional, mental, spiritual, social and economic destruction has been wreaked on this and other nations.

There has been despair, distress, isolation and loneliness endured by the many, whilst the few have baked banana bread and revelled in their furlough, oblivious or uninterested in the carnage around them.

This week’s news on Australia’s Covid quarantine camps and the forced vaccination anschluss of Austria and Germany has enraged me. However, something I came across this week has deeply saddened me.

Visiting the Anne Frank House in Amsterdam has always been on my bucket list. Here is the Secret Annexe, the rooms where Anne and seven others hid for over two years to escape the Nazis.

Anne’s concerns, dreams and hopes are recorded in the diary she kept, on display at the museum. However, it seems that I, and millions of others, will never be allowed inside the building. Here is why: ‘In accordance to guidelines made by the Dutch government, a Covid Certificate (EU DCC) is mandatory for all visitors aged 13 and over. Without this Covid Certificate with QR-code, you cannot be admitted.’

If there were ever a more inappropriate setting to demand government papers for entry, or to be excluded as part of the Untermensch, it is surely the Anne Frank House.

Anne’s father, Otto, recognising the threat Adolf Hitler’s rise to power posed, moved his family from Germany to the Netherlands in 1934. Unfortunately Holland, too, would come under Nazi rule and by 1942 Jews were increasingly excluded from every area of life. Otto Frank made plans for the family to escape the deportations which had begun in Holland.

‘Father began to talk of going into hiding. He said it would be very hard for us to live cut off from the rest of the world.’

Barred from cafes, bars, restaurants, cinemas, theatres, playgrounds and public transport, Jews became a marginalised group in the Netherlands. This marginalisation, wherever it is carried out, is a familiar first step, facilitating the acceptance of more extreme measures.

Last week Germany introduced a ban on public transport for the non-vaccinated. For governments drunk on power, it is the perfect time: winter is coming with freezing winds and icy pavements making it more unpleasant and treacherous for refuseniks to navigate their way around.

Forbidden from using public transport, Anne’s family walked in the rain to their hiding place: ‘The people on their way to work at that early hour gave us sympathetic looks: You could tell by their faces that they were sorry they couldn’t offer us some kind of transportation; the conspicuous yellow star spoke for itself.’

If numerous YouGov polls and Jeremy Vine Shows are to be believed, there will be little in the way of ‘sympathetic looks’ for modern-day lepers. Vine, in one of his odious musings, attempted to gauge support for the morally repugnant idea of locking up the unvaccinated, allowing them out only for work and food.

Vine’s next talking point: Should the unvaxxed be ghettoised? We should not be surprised if it happens. Tyranny treads a familiar path with only slight variations. Like a McDonald’s in Texas, Paris or Brentford, it is instantly recognisable. The consequences for the persecuted and vilified are very similar no matter which hateful regime they have the misfortune to live under. Anne wrote that ‘the final forming of a person’s character lies in their own hands’.

So it does. But it also takes a unique situation, a crisis or a set of circumstances to reveal it.  The human rights lawyers?  The liberal-loving, democracy-supporting cheerleaders? The free Press mantra of ‘democracy dies in darkness?’ As Groucho Marx once said: ‘These are my principles, and if you don’t like them … well, I have others.’

Conversely, many people have surprised themselves with their refusal to comply and by doing what is right rather than what is easy. Anne Frank held the belief that people would learn from this period and remain vigilant: ‘What is done cannot be undone, but it can be prevented from happening again.’

Australian Premier Dan Andrews has ruled the unvaccinated will be barred from freedoms ‘whether it’s a bookshop, a shoe shop, a pub, a café, a restaurant, the MCG (Melbourne Cricket Ground) – the list goes on and on’.

Ireland’s deputy head of government, Leo Varadkar, raged dangerously against the five per cent of the population who have not taken a Covid jab, declaring that they ‘are causing the trouble’.

‘I somehow feel that everything will change for the better, that this cruelty too shall end, that peace and tranquillity will return once more.’

A fitting place to start would be at the Anne Frank House. Is anyone there brave enough to stand up and say ‘no?’